Inside the design of World of Warcraft’s newest raid, Azshara’s Eternal Palace

The newest World of Warcraft patch, Rise of Azshara, very easily could have been an expansion in its own right. We’re heading to Nazjatar, the kingdom of Queen Azshara, one of World of Warcraft’s best villains. She’s been waiting in the wings since World of Warcraft’s launch 15 years ago, but so far she’s made the most of her screen time in Battle for Azeroth by being elegant, catty, and a little hammy.

In an expansion where most of the cinematic screen time has gone to Overlord Saurfang, a famously dour character, Azshara is a breath of fresh air. Which is ironic, really, considering she’s threatening all the characters with drowning.

Building Azshara — and her empire — was a process a long time in the making for the World of Warcraft team. Her story also gives us some fascinating hints into the mind of the Old God N’Zoth. We won’t be able to fight her until July 9, but Blizzard shared an inside look on Azshara and Nazjatar’s development with Polygon in a recent interview.

“Our goals and desires for what we wanted to see for the Naga and Nazjatar was to be able to show their home city,” says art director Ely Cannon. “We wanted to really show them in the context of where they rooted and lived in their world, as opposed to a guerrilla warfare force or an army that’s invading or affecting change in other areas of the world.”

This is the first time we see the Naga as a society, and the team took care to consider how that worked on a logistical level. “We had to really step it up and figure out what they were beside an invading force, right?” says Cannon. “How do they live? How do they interact with the environment around them? Zin-Azshari is really interesting because you can see their past and what they’ve evolved into today.”

Blizzard knew that the Naga would play a prominent part of Battle for Azeroth early in the development cycle. Azshara, and the Tidestone she uses to set up her ambush, appear in World of Warcraft: Legion. The team also knew it had to distinguish Nazjatar from the notorious Cataclysm zone Vash’jir, which was totally underwater. “We not only wanted to show a very different type of ocean floor environment,” Cannon says, “but make this a place you’d want to spend a tremendous amount of time.”

Cannon describes playing underwater as “traditionally, one of the more difficult play experiences in World of Warcraft.” Vash’jir is the most obvious example of that, and the team wanted to learn from its mistakes and create an environment that’s easy to navigate without feeling challenged by environmental pressures. These questions came up as soon as the planning for Battle for Azeroth began … as well as what Queen Azshara herself would look like.

Azshara’s only appearances in Battle for Azeroth were either in her Night Elf form, or with a placeholder model. She appeared in Warbringers: Azshara, and we got to see her final form. After over a decade of dealing with the Naga, the concept had teeth (and scales, and claws…) again.

“She’s beautiful and elegant, but at the same time extremely powerful, extremely dangerous, and very much monstrous,” Cannon says. “She’s a mutated, converted, transformed version of her former self.”

Of course, this comes with some unique challenges, like deciding how five eyes blink. (Simultaneously? In turns?) Azshara’s final design is what N’Zoth thinks the perfect elf might look like, and she stands at the top of the pyramid. Her influence extends throughout Naz’jatar. Interestingly enough, the idea of transformations reflecting a character’s true nature comes back up with Priscilla Ashvane, who turns into a hulking sea giant in Azshara’s Eternal Palace.

“She’s always been a minion,” Cannon says. “She’s always been a puppet. Now, [she’s] going to be transformed into a nasty monster, which is what inside of [her] all along. That’s a reflection of her inner nature coming out. It’s interesting, because you get the sense of she’s a very bad person inside. And now, we see that manifest in the form she ultimately takes.” 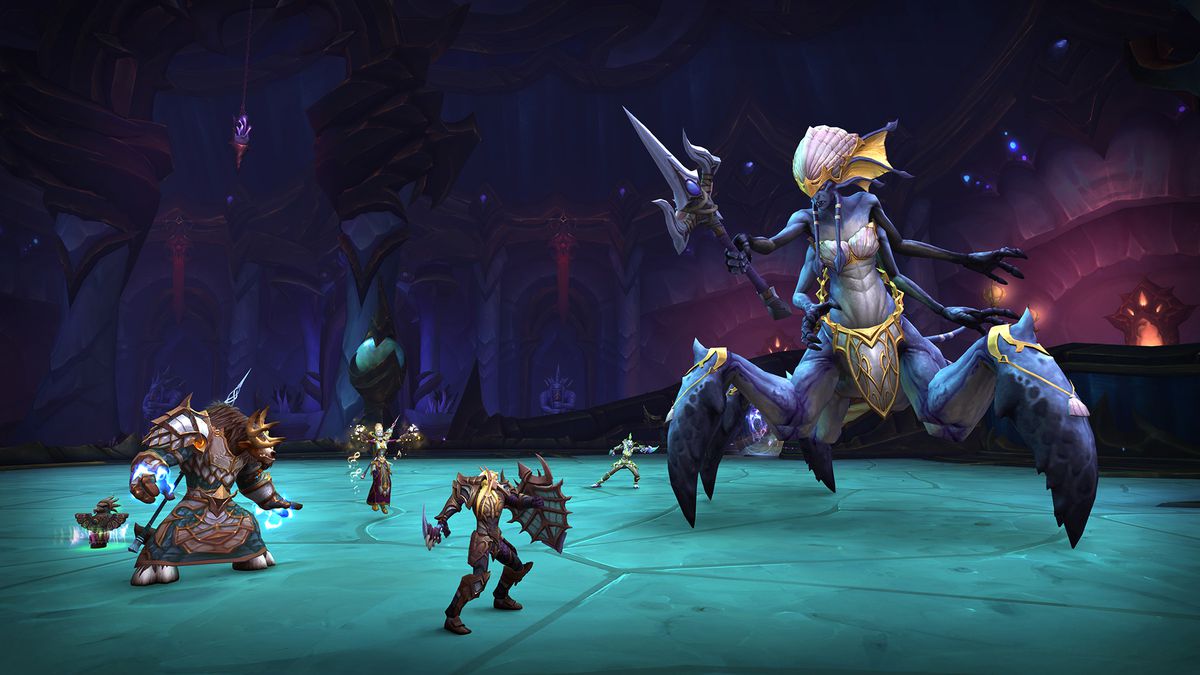 As for the rest of the raid, Cannon shared some interesting details. Azshara’s Eternal Palace, like the rest of Nazjatar, pulls strongly from Night Elf influences in zones like Aszuna and Suramar. With that in mind, the team works on raids with “wings” in mind. Each wing has a specific motif. The hatchery is meant to push the alien invasion nature of the Naga, showing how they breed and raise their young. The council chambers, on the other hand, are a space of power and prestige. These considerations are balanced with the fact that the team wanted to emphasize the raid is deep underwater, in Azshara’s domain. The architecture is a constant reminder of the fact that you are in enemy territory … while still appearing like a palace.

After asking about Azshara, I asked about her dark master, N’Zoth.

“We’re not really talking about N’Zoth yet in any specific terms, or talking about he looks like or whether we’ll see him or anything else,” Cannon says. “There’s a lot of N’Zoth images out there. I wouldn’t say any one of them … is what we’re saying N’Zoth looks like. Could be! Could be not. We haven’t publicly said anything about this yet.”

It’s an intriguing answer, but for now the spotlight is solely on Queen Azshara and her encounter in the Circle of Stars. As for what happens next, players will need to complete the Eternal Palace raid. The raid opens tomorrow, on July 9, with Heroic and Normal difficulties. The Mythic version of the raid, along with the first wing of Raid Finder, opens on July 16.