Oculus VR game Phantom: Covert Ops has the most surprising secret ingredient in recent memory. It’s a tactical stealth-action game in which the player tries to prevent all-out war by infiltrating an enemy base. And it’s played, in its entirety, inside of a kayak. A tactical kayak.

Phantom: Covert Ops is the union of two in-development projects at nDreams, the U.K. studio behind VR fare like Shooty Fruity and Bloody Zombies. The studio, which has made virtual reality versions of skydiving and hot air ballooning, was working separately on a kayaking game and a stealth game. At some point during that development, those two projects were brilliantly combined to form Phantom: Covert Ops.

I prefer my VR games played sitting down, where I can focus and avoid the queasiness that comes from moving around in virtual reality with full camera control. Phantom: Covert Ops keeps me seated as I play — remember: I’m in a kayak — letting me look around at the flooded military base I’m infiltrating and allowing me to concentrate on the game’s controls. With both hands, I use a virtual paddle to steer and move my tactical kayak with one-to-one movements, paddling forward and backward and turning with natural hand motions. Using Oculus Quest motion controllers, I pilot my kayak about as well as I can a real-life canoe, which is to say … adequately.

My tactical kayak and I come heavily armed. A silenced pistol is holstered on my chest. A scoped rifle sits to my right. I can put my paddle away to quietly draw my pistol and shoot out spotlights that might help enemies spot me. Or I can shoot a fire extinguisher to cause a distraction, or an explosive red barrel to cause destruction and death. I also have explosive charges that I can toss and blow up using a detonator. 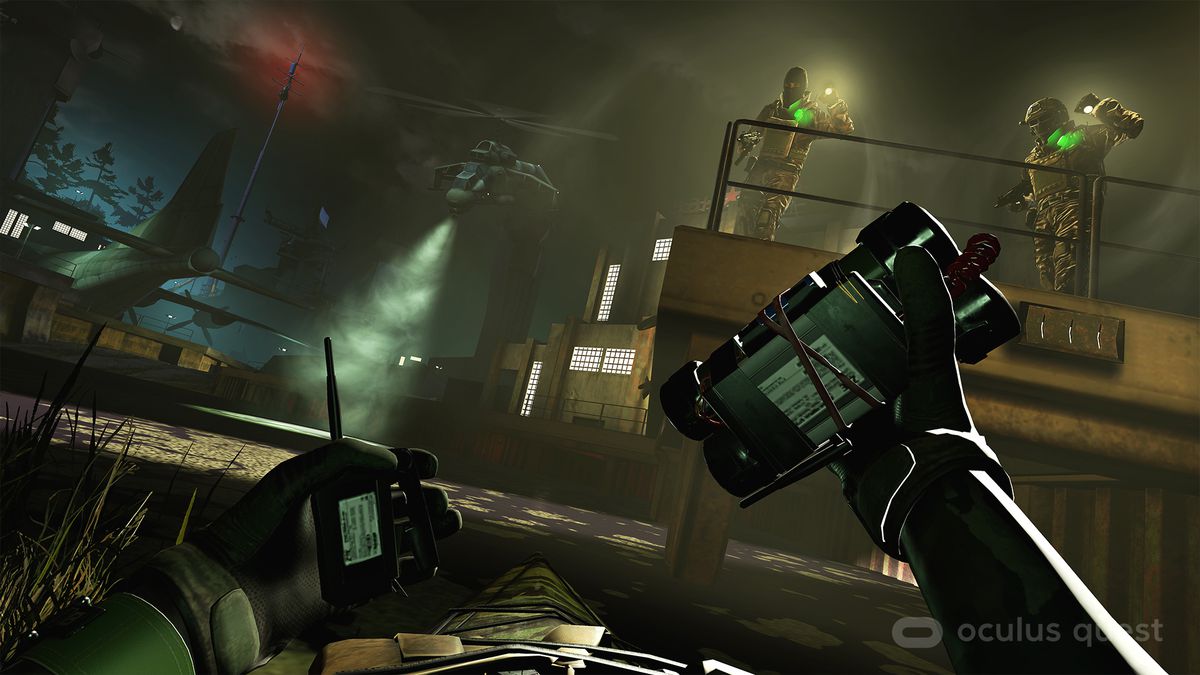 But this is a stealth game, and nonlethal options abound. I can sneakily steer my kayak around spotlights, take cover in pockets of reeds, hide under platforms, and open up unguarded routes to avoid enemies.

As in many stealth games, things quickly become dangerous if you’re spotted, and finding a safe hiding space can be tricky. This may be a tactical kayak, but it behaves like a watercraft; it won’t turn on a dime. I died frequently when I recklessly paddled into an enemy’s line of sight, but checkpoints were fair and frequent.

In short, this is a military stealth VR game that works, thanks to its (frankly delightful and admittedly borderline absurd) kayaking component. It’s cleverly designed to adapt an existing game genre to virtual reality, while taking advantage of the immersive qualities of VR, where the fear of being spotted by enemy soldiers is drastically heightened.

Phantom: Covert Ops is expected to launch sometime in 2019 for Oculus Quest and Rift.