Outer Wilds is Groundhog Day in space, with a tantalizing mystery at its core

Games with multiple, sprawling worlds to discover and explore can be daunting.

It’s been years since I’ve had the time to indulge in solar system spanning games like No Man’s Sky which requires a huge time investment if I want to get anywhere. Thankfully Outer Wilds, out now on PC and Xbox One, has a smaller, hand-crafted set of planets for me to explore. Its various worlds are small, think Mario Galaxy, but each one is packed with a handful of locales, puzzles, and bizarre natural phenomenon to explore and figure out. Each planet feels like a puzzle box that only grows more complex as I learn about each place I visit.

Unraveling the mysteries set on each little world is exciting enough as is, but it’s all done with a twist: My character is stuck in a time loop.

I only have around twenty minutes to discover the secrets of each planet before its natural disasters kill me, I run out of the resources I need to stay alive, or my solar system’s sun collapses and turns into a supernova. Dying in Outer Wilds resets this loop, but I retain everything I learned, giving each life both a time limit and a purpose. Each death is a measured step forward, and hopefully brings me a bit closer to solving the game’s mysteries.

The ultimate hope is that eventually I’ll learn why this is happening, and how I can stop it.

INTO THE GREAT WIDE OPEN

I play as a Hearthian, a resident of a small planet called Timber Hearth. My home is rustic, but it somehow also has a robust space program and I’m its newest member. The game begins as I get ready to embark on my first voyage into space. 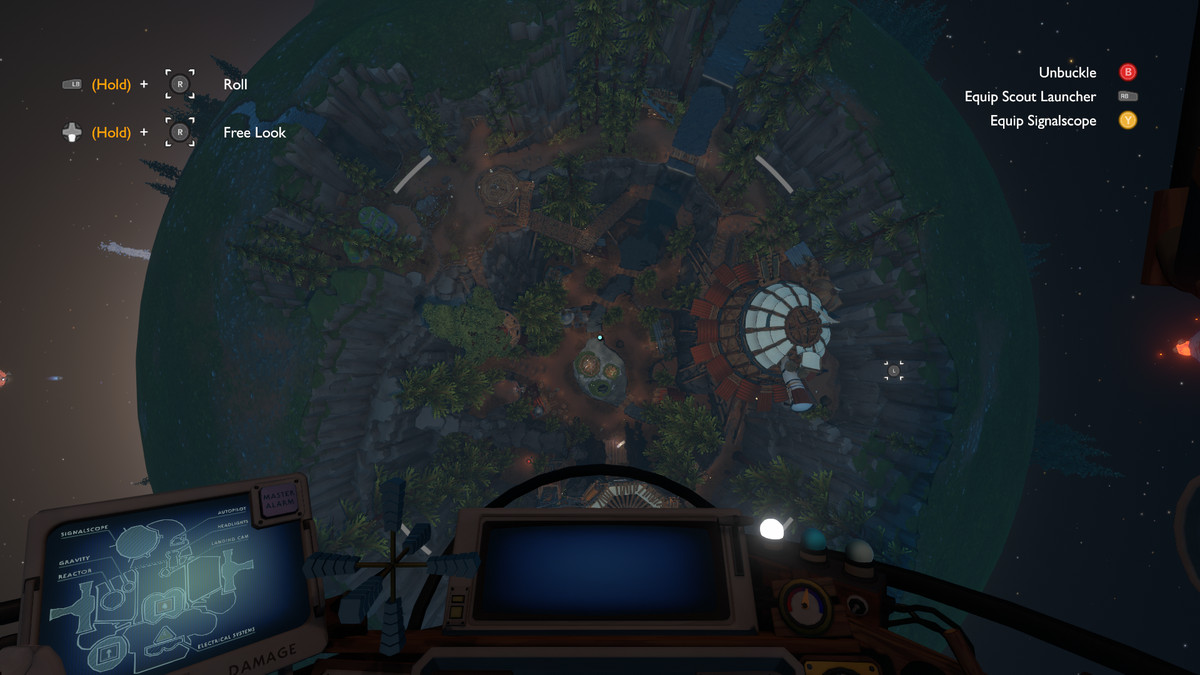 The opening of Outer Wilds belies the much more challenging journey ahead, but it also helps ease me into all the challenges I’ll run across in space. As I awake by a campfire, I make my way around my small, wooded home meeting my neighbors, learning about our space program, and discovering some of the unique features of our solar system.

One resident suggests exploring a zero-gravity cave to practice navigating 3D space in the game’s first-person view. Timber Hearth is full of these small, welcoming spaces that contain some of the features of our solar system so I can become comfortable before venturing forth. I even get to test out a lot of the equipment I have on my journey in controlled scenarios so I can understand how everything is used. The journey I’m about to take will be long and challenging; it pays to start slow and learn what I’m doing.

I discover that many of my predecessors are already hanging out on other nearby planets. Some have set off to understand how our universe works, while others have disappeared trying to unearth the whereabouts of an ancient race that may hold the key to figuring out what’s going on, and why.

Those long-lost people, known as the Nomai, are responsible for much of the technology I have at my disposal, which helps explain why my home feels so provincial while having access to such advanced equipment. While they’ve left a mark on my solar system, no one has ever found a living member of their race. All we have are remnants of their society, abandoned technological structures, and written accounts of what they were doing before they disappeared. 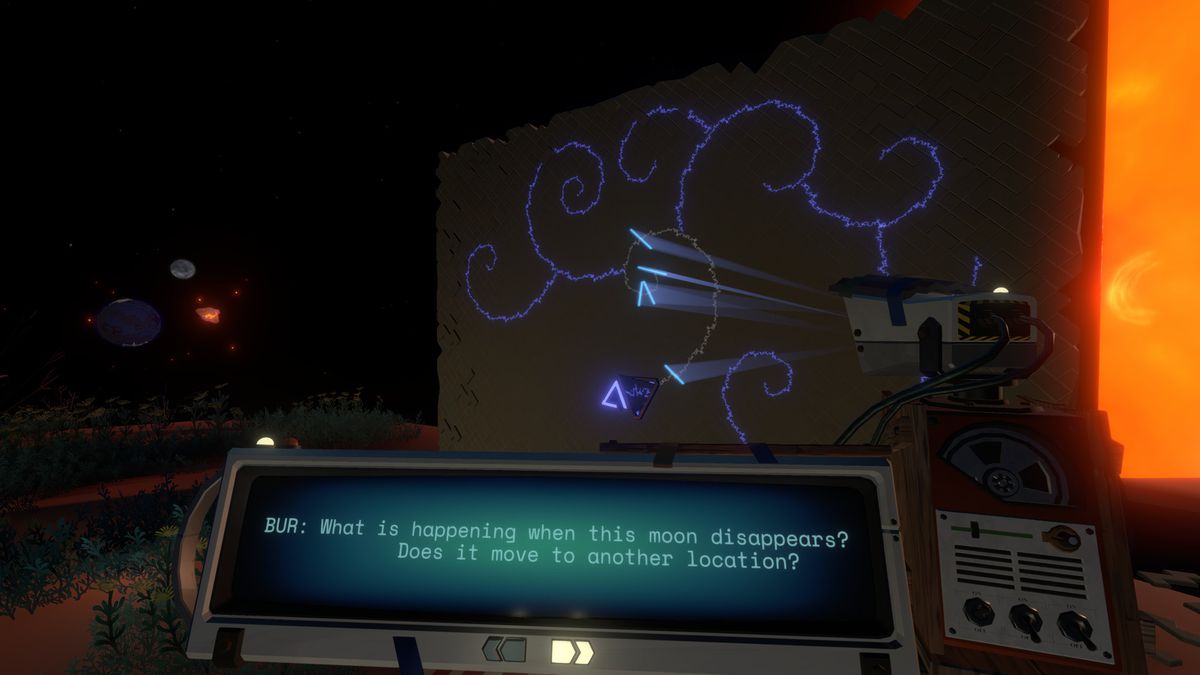 Nomai text can branch off of itself
Mobius Digital/Annapurna Interactive

Thankfully, I have a translator that will allow me to decrypt the messages they left behind. The Nomai language is structured uniquely; it branches off itself rather than show the sort of linear conversations I’m used to reading. Each sentence can break off into someone else’s reply. A single thought or idea can lead to several threads of conversation. A complete transcript of a Nomai conversation looks like a tangled weave of sentences once fully decrypted.

I point my translator at a line of text and it gets translated for me on my device. As this happens, more lines of text branch off of the decoded lines and conversations unravel before my eyes. Discovering their language in this way adds some momentum and life to what would otherwise be static text. I’m taking part in a form of ongoing archeology through the written word, and it’s the structure, not the text itself, that proves the most interesting.

Uncovering what happened to the Nomai happens in the same way. Each planet I visit offers only a sliver of a clue. Each new piece of information can branch off into another set of mysteries or allow me to dig further into one specific channel of the story, and I have a limited time to work through it before I have to restart the time loop.

On my ship, I can view a map of all the planets in the solar system, as well as a map of what I’ve learned up to this point. At first it starts off small, as I scratch the surface of each planet’s mystery. But eventually, the map becomes more complicated as each new discovery connects to another somewhere else across the stars. It’s a fascinating way to link story and geographical location.

How I fill up this map is up to me. Once I leave Timber Hearth, I can travel anywhere in the solar system. Each planet is unique and some are awe inspiring. There are the Twin Planets, where one planet is sucking all of the sand off the other, uncovering ancient ruins in the process. Brittle Hollow is a planet in the process of collapsing into a black hole at its core. Giant’s Deep is a hellacious water planet filled with massive tornados that throw its islands into the atmosphere. There’s even a comet barreling through my solar system that I can land on. 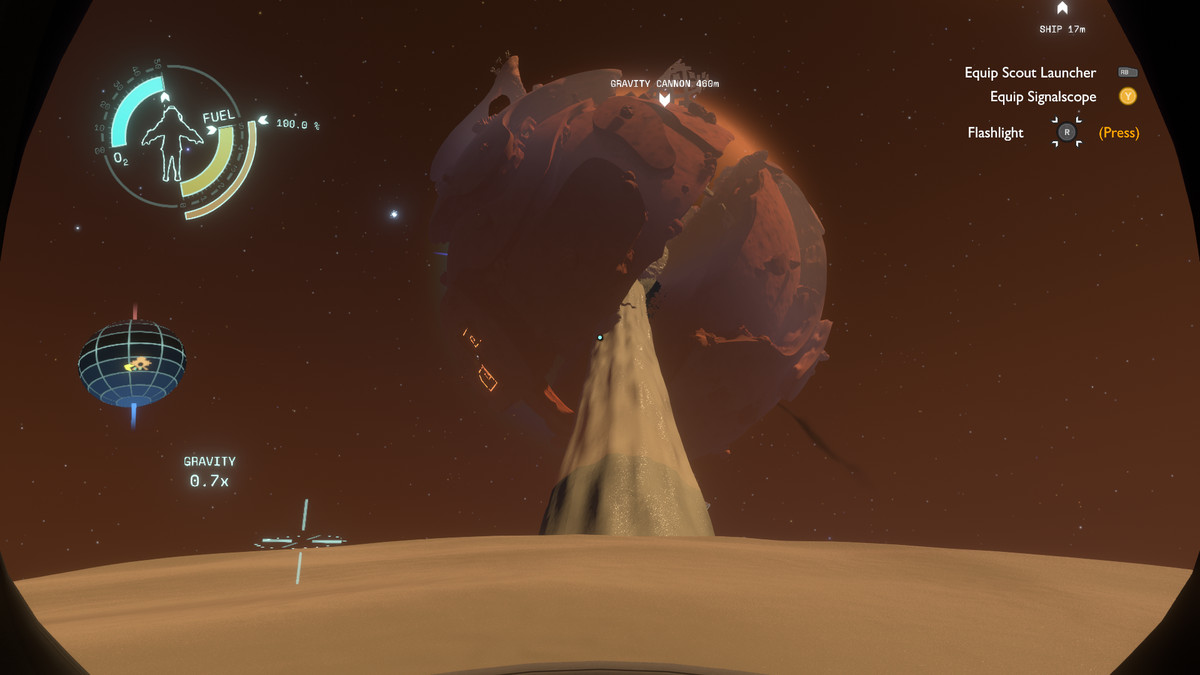 Getting to any of these planets requires me to fly my ship directly to them. Thankfully, my solar system is small enough that I can reach any of these planets within a few seconds. As I break into their atmosphere, I must gently land my ship on its surface. Once I exit my ship, I can freely explore what that planet has to offer. Each have differing levels of gravity, so in some cases I can use my jet packs to glide across the surface, while others require a lot of walking. Depending on where I go, I may be exploring something as simple as ancient, underground ruins or a massive plant that has grown so huge, it destroyed a planet from the inside out.

However, my favorite place is the Quantum Moon, a celestial body that is situated strangely in space and time. It constantly moves around my solar system and, if I happen to look away from it, it will disappear. Figuring out how to land on its surface requires some clever thinking, and figuring it out was one of my favorite puzzles in the entire game.

Besides the smaller mysteries tucked into each body that orbits the sun is the larger mystery that slowly comes into focus the more I play: Why did the Nomai come to my solar system and what were they trying to do here?

I haven’t solved the mystery yet, but what I’ve discovered so far has kept me literally dying to understand the entire story. If they were smart enough to make their way into another solar system, develop technology to travel around it seamlessly, and start new lives here, what caused them all to die? Are we headed for the same fate? 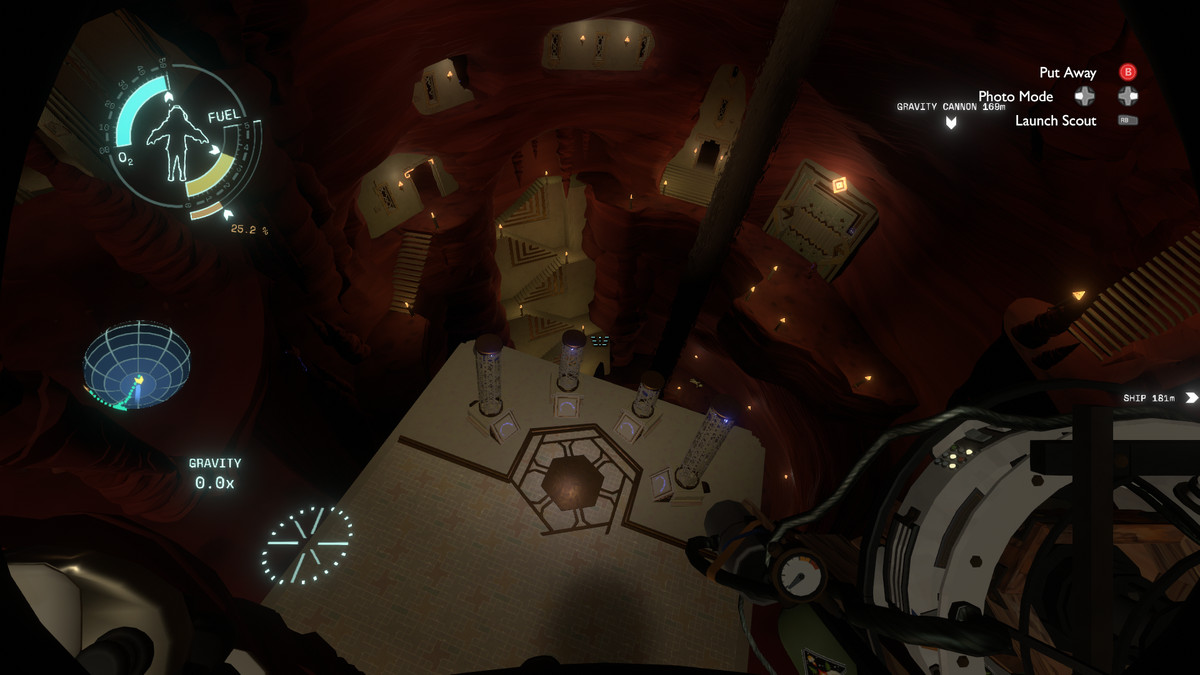 Thankfully, all my deaths in Outer Wilds bring me one step closer to the answer.

Each new life I restart adds new entries into my ship’s computer. As I open my eyes back at my campsite yet again, I rush back to my ship to read how my last life’s discoveries get translated into information I can use in my current run. After several hours, all the various mysteries and oddities I’ve come across begins to cohere. Everything is becoming both connected on my computer and in my understanding. Each new life lived allows me to connect another dot. It’s a satisfying process.

The picture I’m forming in my head is of a people whose own enthusiasm and intellectual hubris backfired, but I could always be wrong. While it’s taken me dozens of lives to learn this much, I still have several more to live before I finish the story. For my character, it’s a mystery of a lifetime, but at least they have all the lives they need to figure it out.