State of Decay 2 is in a strong place — what’s next for the survival game?

State of Decay 2 originally launched in May 2018, and there’s never been a relaunch or expansion as comprehensive as No Man Sky’s Next or Sea of Thieves’ Anniversary Update. Now, as part of Xbox Game Pass, State of Decay 2 has been steadily chugging along. The game is at its strongest point yet, and according to developer Undead Labs, currently has its highest player count ever. State of Decay 2 has become a success story, which is especially notable for a single-player game with very limited co-op. So, what’s the state of State of Decay 2, and where could the game go from here? There are a few viable options, and it all comes down to the game’s survivors.

The game has had a few large-scale updates that change the way players can play with the base cities. The Choose Your Own Apocalypse update added new randomized start options, and increased difficulty options. Heartland, an expansion announced at E3 2019, returned to the setting of the first game and contained a more focused narrative. State of Decay 2 and Heartland take two very different approaches to characters, and it’s fascinating to see the two visions shake out.

There’s a lot of lore to the State of Decay universe, but the real draw — and the thing that keeps me coming back — is the characters. In the base version of State of Decay 2, those characters are randomized. It’s much like XCOM or Animal Crossing in that I’m given a wide variety of characters with different personalities and wants. There’s just enough there that I’m able to project things onto them, or create stories on my own from what they want.

At one point, with my community completely overfull and my resources strained to the breaking point, I looked at my collection of survivors. Someone needed to go. Which one of these poor souls would I cast out to the wild? The doctor? The soldier? The guy who I saved from a barn, had a trait called “Pathetic”, and had just stress-eaten from our supplies?

“The challenge in a lot of these stories is not so much the zombies themselves, but how to make a group of damaged people come together to form a community that has what it takes to survive,” said Geoffrey Card, lead designer on State of Decay 2, in an interview conducted with Polygon. While an initial set of characters can carry their weight, anyone you meet in the wild is fair game to have unlikable or downright dangerous personality traits.

Some traits are purely based off gameplay utility.

“If we wanted characters to show up with the Utilities skill, for instance, we needed to come up with a certain number of traits that might reasonably provide that skill — usually diverse and interesting careers,” Card said. The team needed to spend time searching out various job descriptions to ensure their bases were covered. As for the more erratic and personal traits, Undead Labs pulled inspiration from friends, family, and random conversations around the office.

“We wanted people to feel like they could encounter [these survivors] in the real world,” said Wonder Russell, director of communications at Undead Labs. State of Decay 2’s characters, and the openness of that narrative, was a shift from the first game. “State of Decay had a little more of a story element. In 2, we focused on those sandbox elements.”

Creating the system that could randomize believable, likable, and interesting NPCs took a large investment, but once that was done, it was possible to rapidly create characters. And with those NPCs come new stories, new scenarios, and even a few soap operas. 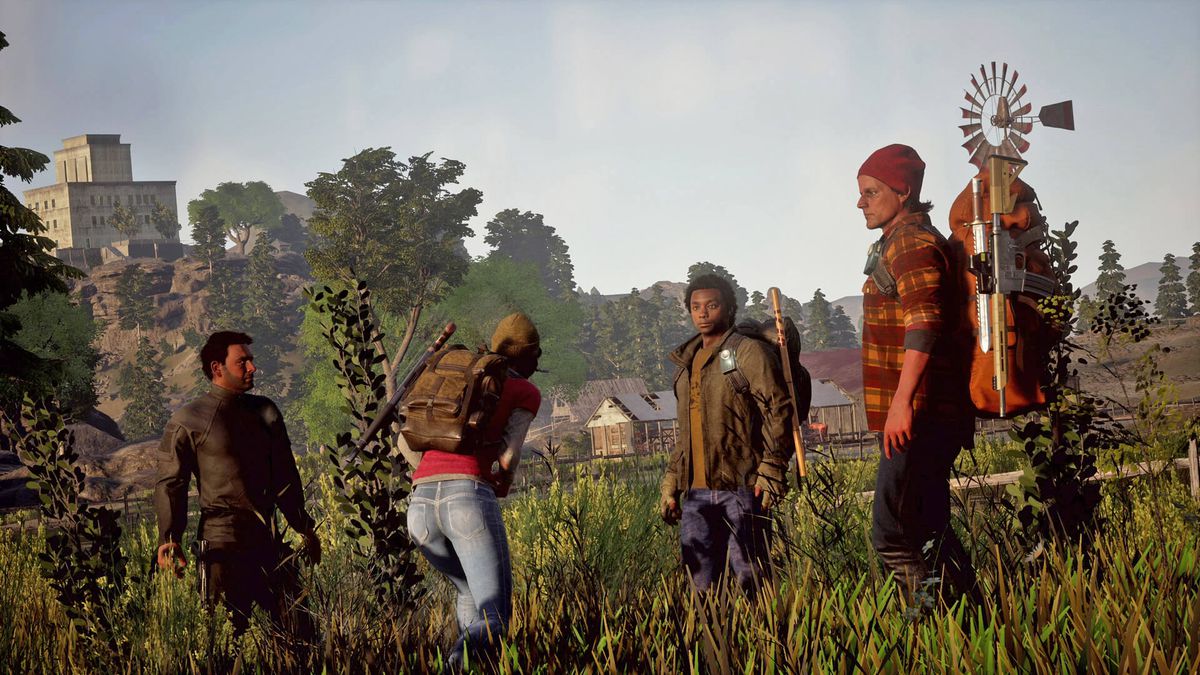 A group of State of Decay survivors plan their next move.
Undead Labs / Microsoft Studios

Much like the Blood Plague that haunts the survivors of State of Decay 2, these systems would eventually change and evolve based on player feedback.

“We balance towards accessibility with State of Decay 2,” said Quin Richards, senior designer, in a call with Polygon. “Ultimately, the challenge level ended up being on the mild side.” Hence, Dread Mode and Nightmare Mode, new challenges that ramp up more quickly.

There was another thing that fans wanted, and that request would be much harder to fulfill. Fans of the first State of Decay wanted the sequel to return to its roots. Enter Heartland, an expansion that takes place in State of Decay’s original setting, Trumbull Valley.

“A lot of people were asking for focused narrative, and that’s what Heartland was really hoping to achieve,” said Richards. Both systems have been well received by different parts of the player base, and they both have different strengths and weaknesses. The team had to build new infrastructure in order to support Heartland’s predetermined characters, and the randomization system was put back on the shelf in favor of establishing stories for named characters in the world.

“The data structure that we created to make sure everything stayed consistent meant that we couldn’t just slap a name onto a character,” said Card. “That name had to be tied into a cultural background, which tied into the character model, which tied into their outfit tag, etc. We had to create an elaborate set of data for each character to fill in all those blanks and make sure the right name ended up hovering over the right face.” 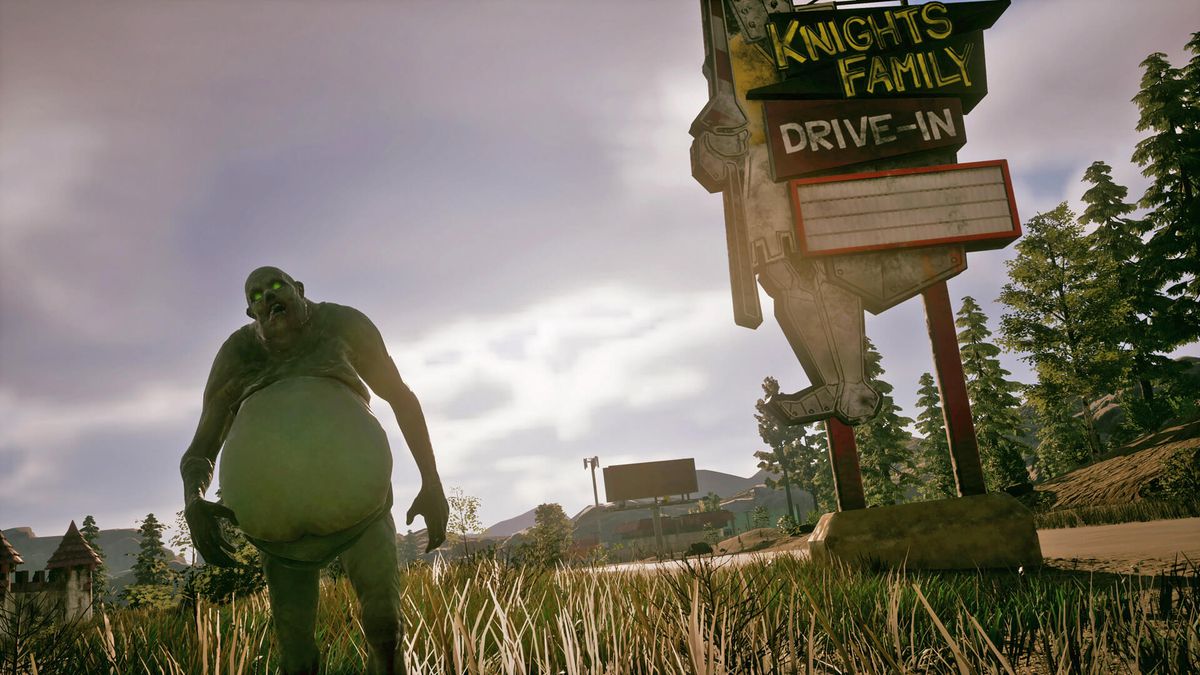 Zombies will remain a threat to survivors, random or not.
Undead Labs / Microsoft Studios

What’s next for State of Decay?

Heartland landed well with State of Decay’s fans — but it left behind one of the sequel’s strengths. Managing a community of survivors, seeing them interact and making choices about whom to prioritize and whom to use as a meat shield, was a fun take on the zombie apocalypse. The sandbox was less linear, and focused, but for many players, their imagination could fill in the gaps.

The sandbox also meant that Undead Labs could fire out smaller, iterative updates that improved the formula. Heartland was a larger chunk of content, and that meant the team had to focus resources on getting it ready for launch.

There are obvious pros and cons to each approach, and it’s impossible for Undead Labs to do everything and please everyone. However, the team has experimented enough to see what might work best for the future.

Richards “wouldn’t be surprised” if the update schedule pulled from both approaches in “a mix between Heartland and State of Decay 2, with procedural and strong narrative ties.”

And the team doesn’t plan to move on from State of Decay 2 yet; a sequel won’t come and establish a new baseline for players. “We’re in a really great position where we’ve gotten to keep adding players to the game,” Richards said. “We’re [at] 5 million players, and we’re looking to grow.”

One thing that isn’t expected to change is how State of Decay 2 is capable of surprising players by ramping up the difficulty, a design choice that’s likely to gut-punch players by killing their best survivors, or introducing a new set of conditions that pinches a previously well-run base.

“That’s what the game is about, in a lot of ways: investing in fragile people that you are fully responsible for, knowing that if you lose them, they’re gone, and you will never get the exact same character back,” said Card. “A lot of zombie stories rely on their audience valuing each individual human being for who they are, knowing that their death is the end of something irreplaceable. We want our game bring at least some of that feeling across, and that’s what a lot of players come to it for.”