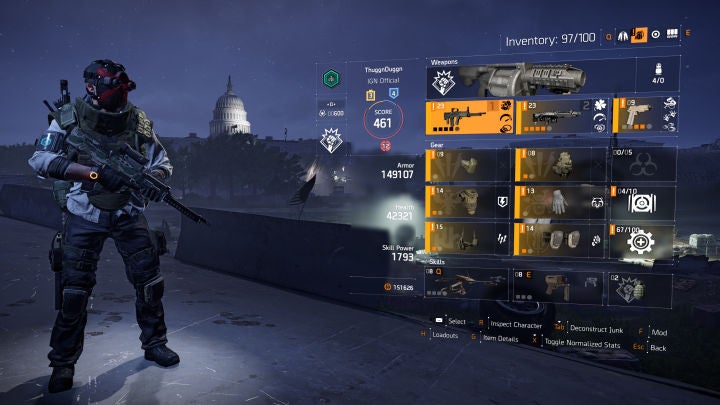 The good news here is that gear score isn’t nearly as important as itemization when it comes to effective power.

Playing at higher difficulty does grant more specialization points and experience, which gets you a proficiency cache sooner, but winning a brief Conflict PvP match awards up to three caches and seems to be much more efficient than any other method. Conflict itself is enjoyable enough, but the Division 2’s at-times clunky cover-based movement and sluggish ability usage have a hard time holding a candle to the fast, fluid pace of the other PvP shooters of 2019, and spawn camping is a real problem. The point here is that grinding organized PvP shouldn’t be one of the only routes to circumventing the gear score limit in a game as multifaceted as The Division 2, much less the hands-down best. I’d like more reasons to repeatedly engage with challenge-difficulty PvE content.

So with all that risk, you’d expect a big reward, right? Sorry, but no.

While the convoluted end game progression can be forgiven to some extent in the context of the alternatives it provides and what came before it, the Dark Zone is a different story. The Dark Zone, which I expected to be a dynamic, high-stakes PvPvE zone where you have to be crafty to escape with your excellent rewards turned out to be sterile, shallow, and pointless. NPCs drop the same 450 gear that you can get everywhere else, in addition to contaminated items. These can be stolen by hostile players and must be extracted via a conspicuous helicopter, which is risky and fun. So with all that risk, you’d expect a big reward, right? Sorry, but no. Contaminated items are just more 450 gear to gunk up your stash. I often found myself simply exiting the Dark Zone without extracting my items since it just meant more tedious inventory management later on, even if I was missing out on a .01% increase in damage by way of recalibration. 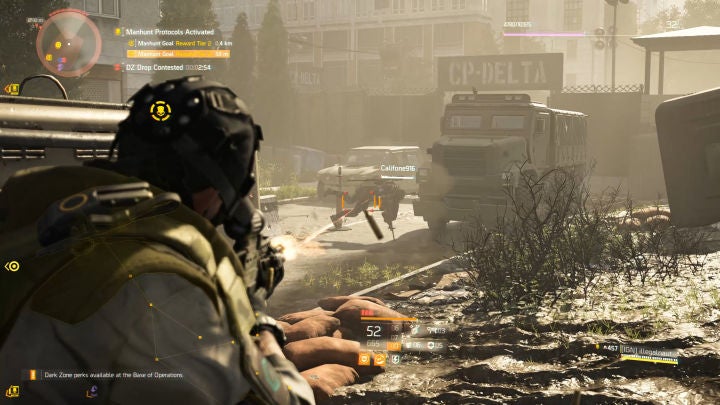 The Division 2 is more than just a strong foundation for future updates: it’s a refined and intuitive shared-world shooter with many dozens of hours of great content and progression you can enjoy today. Its wonderful recreation of Washington, D.C. is a pleasure to explore thanks to a generous amount of chests, collectibles, and dynamic open-world activities. Impactful gunplay makes it easy to care about the well-thought-out loot, and there are plenty of different builds to experiment with even if some are better than others. Given Ubisoft’s promised roadmap, it’s hard to foresee the disappointing endgame incentivization and Dark Zone issues being anything more than a temporary problem, but they certainly torpedo the prospect of sinking hundreds of hours in before the first update. Even so, for a shared-world shooter so early in its lifecycle those problems aren’t too discouraging, and in terms of content, The Division 2 is one of strongest launches the genre has seen yet.