Kind Words is not like any game I’ve ever played. And while Kind Words relies heavily on the input from other players, it’s definitely not like any other multiplayer titles I’ve come across.

The premise is simple. When you first load up the game, a deer that sounds like an Animal Crossing character asks you to write a short letter about something that’s worrying you. This letter will then get sent out to the community, who can respond to your requests. Everything is anonymous. If you like someone’s response, you can share a sticker with them. While you wait, a selection of lo-fi chill beats by composer Clark Aboud play in the background, giving everything a dreamlike feel. That’s it, that’s the whole game. Some, I’m sure, would question if it really does qualify as a game, but whatever you want to call it, it’s a one-of-a-kind experience.

Does this sound like a recipe for disaster? Anonymity plus the ability to write anything you want?

I went in with an open mind, which is to say, I was incredibly honest in my first letter about something that hurt me recently. The what doesn’t matter. What you need to know is that I was afraid to send it. It’s not something I’ve been able to say out loud, much less to anyone around me, so in that sense, the game provided a valuable outlet.

I was surprised to find that every single person that responded to me did so with the utmost kindness. Even those who didn’t understand my predicament were sympathetic, and while nobody could fix the issue, I had the distinct sense that we were in this together. In a world where we perpetually tell each other to not read the comments, or to turn off public chat in video games, Kind Word’s tenderness felt like a revelation.

Reading everyone else’s requests — seeing how honest, how raw, and how vulnerable people were being in an online video game — only deepened my sense that this was something special. Within the span of an hour, I read letters from people who wanted relationship help, players who were struggling with depression, and even folks who wanted music recommendations. Kind Words is simultaneously disarming yet intense experience. 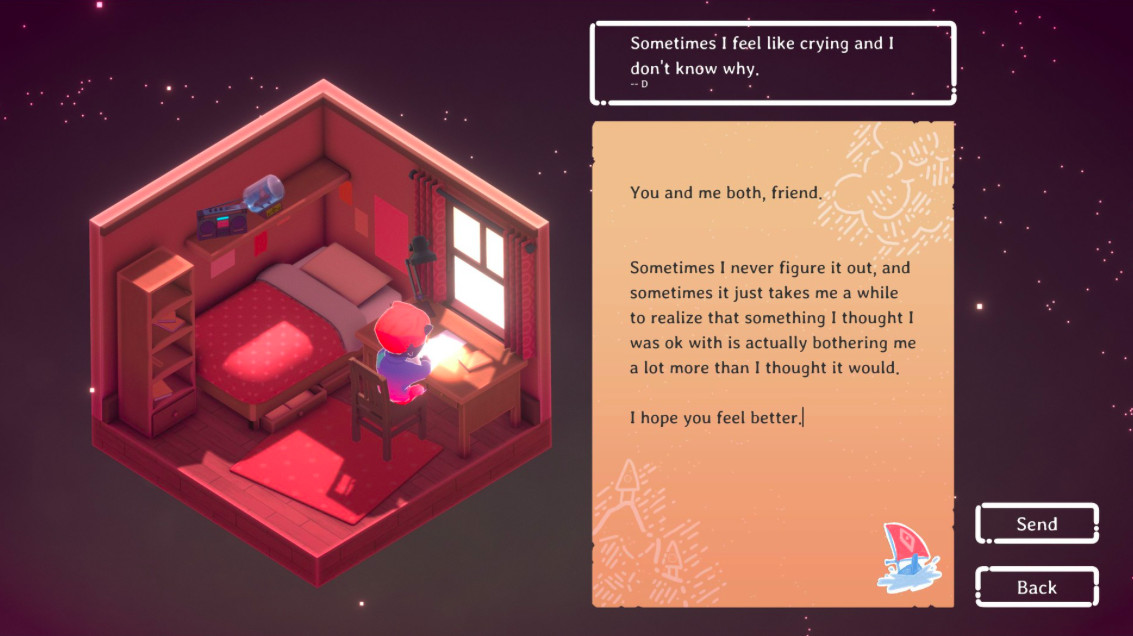 I got sucked into responding to as many people as I could — both because I loved the sense of connection, but also because Kind Words has a lovely “progression” system. When folks respond, they can attach stickers, which you can then redeem to decorate your cute little room. I started enjoying sitting in my space while listening to some great tunes, just wondering when I’d get my next letter. To play Kind Words is to pine for other people, and I’ve never felt that in a game before. Especially not in 2019.

“For Kind Words, we thought: how could we make every word someone writes have an appreciative audience?” Scott mused. “The answer was to scale down and make everything much more personal. Instead of broadcasting your words to the universe, you’re whispering them to a stranger who explicitly asked for them.”

“On a national stage, people are being wildly cruel,” Scott said. “America has a racist President and is putting children in concentration camps. We could make games directly on those topics, but they would likely only preach to the choir. So we are doing what we can to give people a positive place to receive comfort, exercise empathy, and to witness how much need there is for kindness. Kind Words is meant to feel good, but it’s not escapism. It’s about healing yourself and others.”

Scott says that some people initially didn’t realize they were writing to other human beings, which made it easy for them to be cruel. Sometimes, when people share sensitive stuff like talk of suicide, Scott has to step in and make sure abuse doesn’t happen. And other times, Scott makes sure to talk with players one on one.

“One of the weirdest features I added to Kind Words, at least from my perspective as a game creator, is the ability for my to send messages directly to players which appear to them in word balloons as spoken by our game’s guide, Ella the Female Mail Deer,” Scott said. “In the last few weeks I’ve sent over a hundred messages to players this way, thanking them for reports and warning them about being off topic. In extreme cases, I send players notes highlighting the mental health resources that are one click away at most points in the game.”

Right now, Kind Words is only available on the Humble Monthly Bundle, but it’s set to be released on Steam on September 2019. (Scott says that over 4,000 people were playing via Humble as of last month.) For Steam’s launch, Kind Words will largely be the same game, though Scott plans on expanding some portions. There will be more stickers and enhanced moderation tools. And, Scott also has an idea for a new feature that will involve paper airplanes.

“We didn’t expect how much people want to shout out positive and inspiring messages to all players simultaneously,” Scott said. “Players are constantly misusing the ‘request a letter’ feature to just say generally nice things. It’s an awkward thing for me to moderate. I’m supposed to yell at people to stop being nice? And delete all their messages of love?

“So we’re working on a way to channel that into a useful stream for people to both express and receive general affirmations. Nothing is set in stone, but I’m pretty sure it will involve paper airplanes.”