Gearbox hosted its Borderlands 3 gameplay reveal on Wednesday, showing off some of the game’s new features, including a giant spaceship that’ll take players to new worlds beyond Pandora. But a trip through the new ship revealed a few Easter eggs for fans of the series.

The spaceship is named Sanctuary 3. Sanctuary was the name of the big hub city in Borderlands 2. Names normally don’t jump straight from one to three, and players have no idea what (or where) Sanctuary 2 is.

NPCs from Borderlands history join the adventure aboard Sanctuary 3. The ship also has some catch-a-ride graffiti on its hull — in memory of Scooter.

On the tour of the new ship, Gearbox re-introduced players to Marcus, the series’ narrator and gun salesman. Just like in Borderlands 2, the Russian gunsmith will have a firing range behind his shop so players can test out new guns.

Next, the player stops by Mad Moxxi’s bar. Moxxi was first introduced in Borderlands’ second DLC pack: Mad Moxxi’s Underdome Riot. Since then, she’s helped out with the Secret Armory of General Knoxx DLC and took a bigger role as an non-playable character in Borderlands 2. She’s the mother of Scooter and Ellie, the vehicle vendors.

Moxxi’s bar in Sanctuary 3 comes with a familiar feature for Borderlands 2 fans. In the doorway, players can spend money on an in-game slot machine. Being Borderlands, the machine can spit out a great new gun or a grenade armed to explode (which happens in the tour). In Borderlands 3, it looks like there will be more than one kind of slot machine for players to test their luck on.

The next spot on the tour is to Dr. Patricia Tannis’ infirmary. Tannis is one of the NPCs from Borderlands, and aids the first Vault Hunters toward the end of the story. She got stranded on Pandora for years, and lost some of her brilliant mind in the process. When the player encounters her on the tour, she’s crawling out of a dead Skag, which she refers to as a “fleshy sleeping bag.” 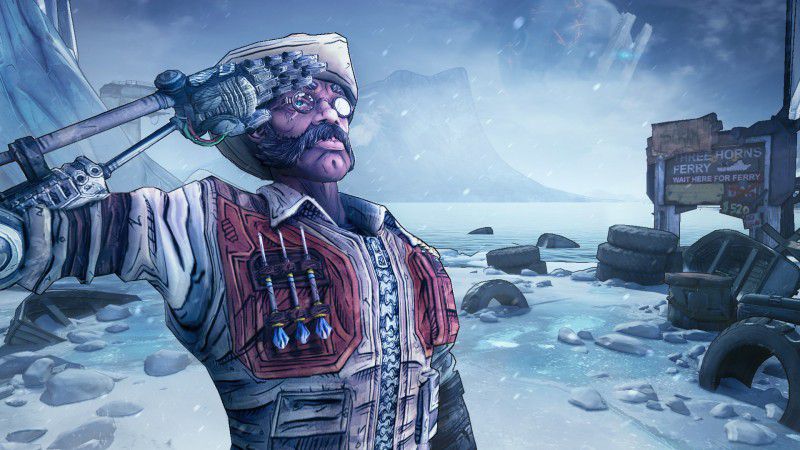 Next, the player stops by Sir Hammerlock’s quarters. Hammerlock is one of the first NPCs players come across in Borderlands 2. He’s interested in all kinds of alien creatures, and will keep track of the enemies players kill in Borderlands 3 by displaying their heads in his trophy room. Hammerlock’s adventures have left him with mostly robotic appendages.

Toward the end of the tour, the player stops by Ellie, Moxxi’s daughter. Ellie joined the Borderlands cast in the second game. She provides players with vehicles. According to the developers, Ellie is the ship mechanic for Sanctuary 3.

The player then stops by Crazy Earl’s door. Crazy Earl is a quest giver in Borderlands. In Borderlands 2, he became a vendor, and sold upgrades for the rare Eridium currency. In both games, he shouts at players from behind a closed door. It seems Crazy Earl hasn’t changed, as he has a custom, padlocked space door on Sanctuary 3. Based on the sign above his head, he remains a Eridium-exclusive vendor in Borderlands 3.

Finally, the player runs into the infamous Claptrap, who appears to be building himself a female Claptrap companion.

Aside from the fan service, there are all kinds of jokes hidden in plain sight on Sanctuary 3. Some of which even Gearbox CEO Randy Pitchford mustered a groan for during today’s livestream.

Players can explore Sanctuary 3 on their own and catch up with old friends when Gearbox releases Borderlands 3 on Sept. 13 for PlayStation 4, Windows PC, and Xbox One.