Sony Interactive Entertainment has released details about Death Stranding collector’s edition, and it includes a host of in-game items, a keychain, and your very own BB pod with a life-sized baby.

Hideo Kojima’s Death Stranding is an unusual game that is described as “a completely new type of action game, where the goal of the player is to reconnect isolated cities and a fragmented society.”

The true nature of the babies in pods is currently unknown, but players will take the role of Sam Porter Bridges, and we’ve seen that Sam is trucking that baby around as he builds ‘strands’ with other players around the globe in previous trailers. You can watch the latest trailer below:

We saw the BB pod at 2018’s E3, during a trailer that revealed new characters, the first glimpses of gameplay, and showed Norman Reedus traversing hostile environments as Sam Porter with his tech and portable baby-toting vat.

The bridge baby pod can be acquired only through the collector’s edition, which will sell for $200. 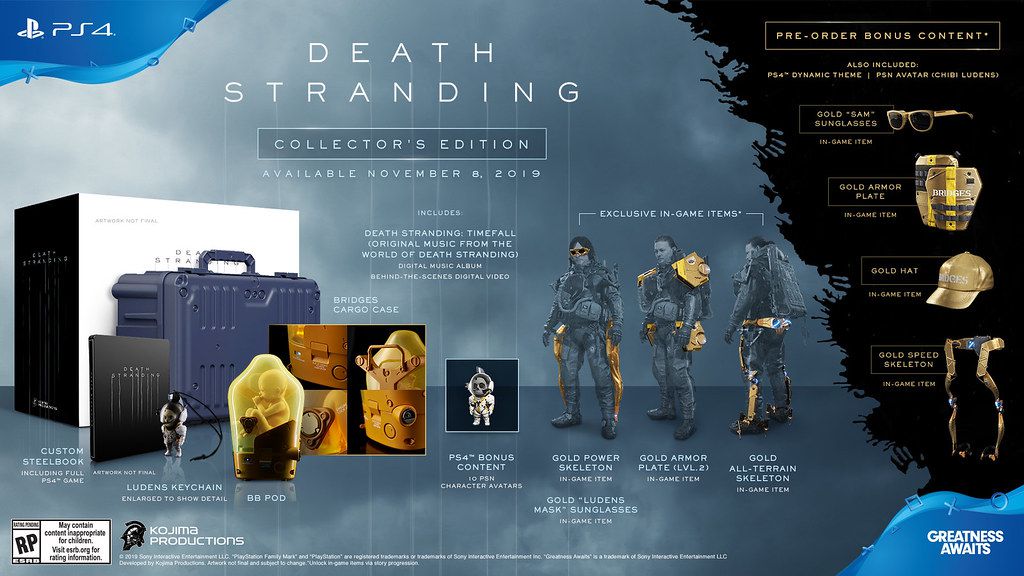 There’s a special edition and digital deluxe edition, which focus on offering the digital goodies, but do not provide your own life-sized rebirth baby that likely serves as some kind of crucial metaphor to the rebuilding of society. This is one of the most enigmatic collector’s bonuses we’ve seen yet, but it definitely fits with the overall mysterious themes and promotion of Death Stranding.

Death Stranding will release on Nov. 8 for the PlayStation 4, along with its collector’s edition.