The Outer Worlds is a vicious parody of capitalism, with a very accurate twist

As the internet lights itself on fire over the question of how best (or if) to provide health care to millions in the U.S., and as billionaires weigh in on the horror of possibly having slightly fewer billions, it’s fair to say that the field of economics is currently having A Moment.

More and more people seem to be awakening to the degree to which the big choices in their lives — what they do, who they love, where they live, if they live —are influenced (or dictated to them outright) by the impersonal forces of economics that Adam Smith dubbed the “invisible hand.”

It’s a conversation that video games have been gradually, almost abashedly, inching their way into for years now. At this point there’s no shortage of games that make rising wealth inequality a background detail or subplot. These include Watch Dogs 2, to the most recent Deus Ex games, and a few that even make it a core theme, such as Grand Theft Auto 5 (both in the game’s story and in its real-world success) or the recently-released Disco Elysium.

But as I write this in November 2019, as scientists declare a climate emergency and the world’s biggest philanthropist fretted that his money might be taxed away, the game that most holistically describes our current moment is Obsidian Entertainment’s The Outer Worlds.

When a few people have everything …

The Outer Worlds is an action role-playing game situated squarely in the Elder Scrolls/Fallout mode. You play a lost space colonist who’s found and unfrozen after seven decades of cryogenic hibernation, only to learn that society has descended into a Gilded Age corporate hell, stretching across many worlds.

Workers in the Halcyon colony toil away on 16-hour shifts doing hazardous jobs for paltry wages. They dwell in company towns designed to immediately recoup their earnings and keep them in perpetual debt slavery. The products they make are often useless, toxic, or both. Management is variously inept, venal, or self-serving, and managers are guarded by thuggish police who are there to quell dissent, not to uphold justice.

The game finds darkly comic, absurdist takes on some of this material; more than one quest brought to mind the bureaucratic madness of Terry Gilliam’s film Brazil, like an early subplot about townsfolk conspiring to conceal a worker’s suicide because the entire town could be fined for the deceased’s “destruction of company property.”

But while talking about exploited workers and abusive management might be a spicy taco on your dad’s Facebook wall, it’s a standard, 101-level critique of runaway capitalism and corporatism. It’s not untrue, but it’s not the whole story.

What surprised me, as a lifelong political hobbyist who did four years of economics in undergrad and had long since grown resigned to feeling like my field was doomed to be misunderstood in pop culture, is where and how The Outer Worlds went deeper.

… almost no one gets anything nice

That realization took a little bit to set in. The first dozen hours of the game are devoted, rightly, to world building and table-setting. My sense of where the game was going, and my respect for what it accomplishes, only crystallized in the final act.

Near the end of the game, you arrive in Byzantium; the richest settlement in the Halcyon system, the exclusive gated colony for the investor class and a few hand-picked managers. It’s the brass ring, the ritzy penthouse suite, the place that every other character you’ve met has fantasized about and maybe committed terrible deeds in hopes of reaching. 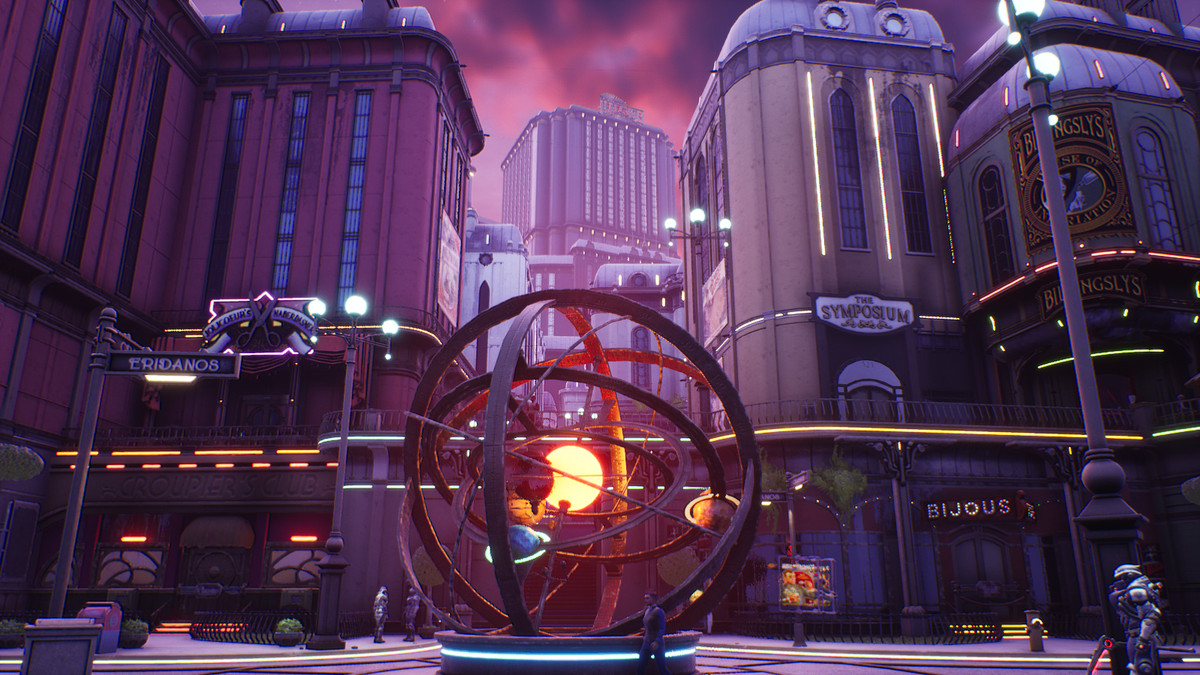 And Byzantium certainly seems fabulous and beautiful and astonishing. It’s nicer than the squalid frontier towns you’ve seen. But then you get a little closer and see how flimsy it all is. There are cracks in the foundations. The plaster is chipping away. The robots and vending machines are broken. People complain about how various services no longer work correctly, or at all. 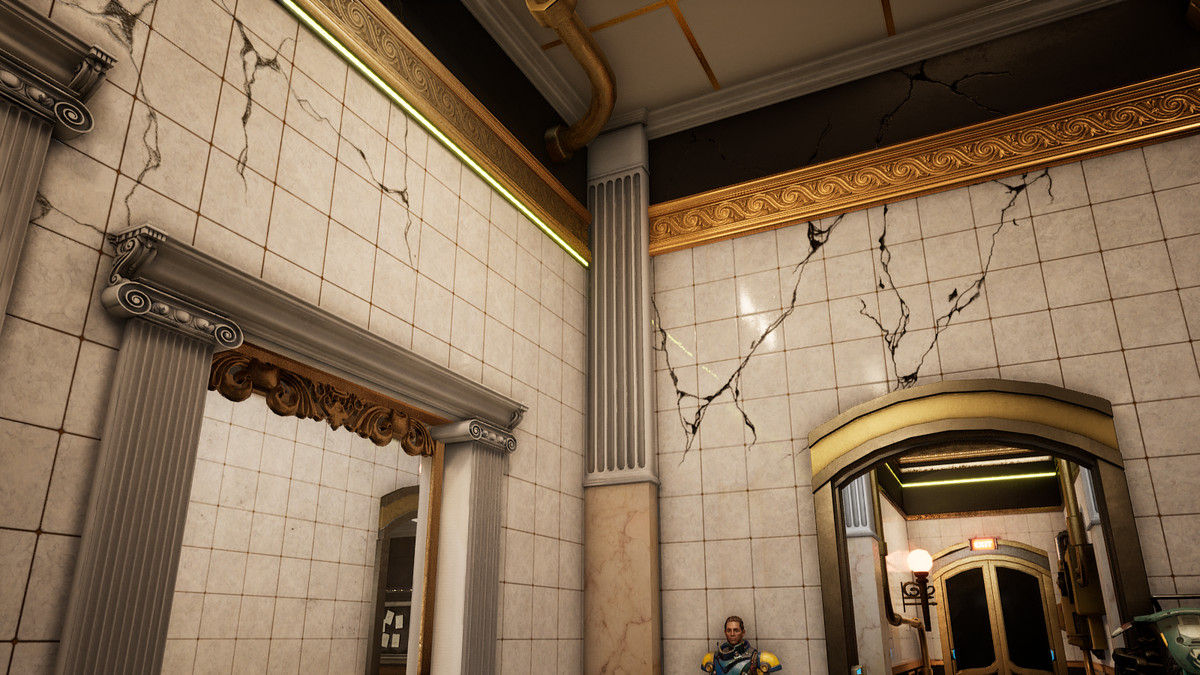 You don’t have to look hard to see the figurative, and literal, cracks in Byzantium’s foundation
Obsidian Entertainment/Private Division via Polygon

A lesser story wouldn’t have thought to make Byzantium so rundown and tawdry. They’d have make it sumptuous, a paradise. They would operate on the assumption that there’s all this good shit lying around and the villainous capitalists are simply hoarding it and you, the hero, just need to take it back.

The Outer Worlds denies us that simple consolation. It shows us how these problems are systemic, and it illustrates, through world building details, where and why the system is breaking down.

But appreciating that requires a bit of context on what “capitalism” actually is. So let’s see if I can give you the incredibly condensed version of some economic theory.

All economic systems are, fundamentally, about what to do with surplus — with what you have left over after your needs have been met.

If you’re a hunter/gatherer, your surplus goes to the members of your tribe who can’t hunt and gather for themselves; the old, the young, the skilled workers who make your clothes and arrows. If you’re a feudal peasant, your surplus might go to a hereditary warlord. If you’re a worker in a capitalist system, it goes to a stakeholder, a capitalist, who can reinvest it in a new venture, possibly creating new jobs (and new surplus).

Capitalism, as a system, relies on markets — on masses of people buying and selling to each other, each trying to get the best deal. Markets essentially constantly poll everyone in the available as to their desires and preferences, and the capitalist, the person investing your surplus in hopes of creating more surplus, uses that information to guide their choices. In certain contexts, the information generated by a market is both more accurate and more reliable, and arrives faster, than almost any other way we currently have to take the temperature of huge swathes of people.

The problem is that not every human need can be accurately gauged and responded to this way. Markets are fantastic at telling producers what people want and need in the short term. How many #10 screws to make, or how many frozen TV dinners. But they’re very bad at gauging needs that are collective, or long-term, like the need for clean drinking water, or breathable air, or robust infrastructure.

Other works are content to assert that the problem with capitalism is the gap in wealth it creates, or the violent oppression of the underclass that comes with protecting that wealth. But those ills aren’t unique to capitalism; our hypothetical medieval peasant had those problems as well.

What is unique about capitalism is how the misalignment of markets leads to the creation of vast amounts of waste at the same time as massive problems go unaddressed, and that’s the issue that the game zeroes in on during its final hours. 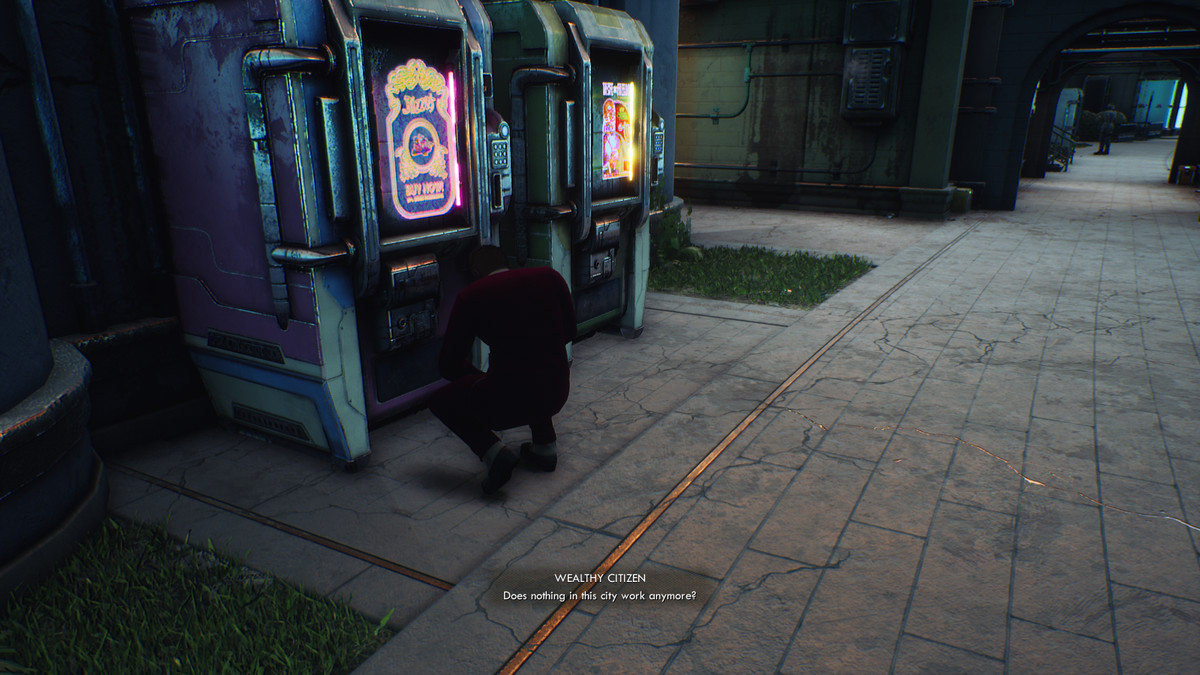 Nothing works, even in capitalist heaven
Obsidian Entertainment/Private Division via Polygon

It’s clear from the very beginning of The Outer Worlds that the Halcyon system is absolutely drowning in consumer products. You can’t turn a corner without tripping over a vending machine full of junk food and ammunition. In gameplay terms, this is actually a bit of an annoyance! You’ll spend a lot of time dealing with vendor trash. But it’s there to make a point.

The entire economy of this star system has so heavily prioritized short-term consumer abundance that they’ve forgotten about infrastructure. Imagine if you were playing StarCraft and only built SCVs, and only ordered them to mine minerals. Imagine stripmining the map yet never being able to progress up the tech tree, because you wasted everything you made.

That’s what’s happened in Halcyon. And, spoiler warning, it’s beginning to kill them all. Because it turns out that colonizing an alien planet needs a lot of infrastructure!

The Outer Worlds understands that past a certain point, the good shit can’t actually exist in a world whose priorities are so fundamentally out of whack. The capitalists of Byzantium have it objectively better than their wage slaves, yes, but their homes are rotting too. Their food is poison too. The system is still coming down around their ears.

It’s not hard to see this principle in action in our own world, as exclusive resorts are menaced by hurricanes and golf courses are crisped by drought.

Astronomical and science-fictional as they are, the problems of the Halcyon colonies may feel less daunting than our own (and are more amenable to being solved by someone with a high Stealth score, a drinking problem, and 500 cans of tuna), but the game does us a favor— and respects our intelligence — by showing us what a systemic failure looks like, so that we can begin the job of addressing it.

Jacob G. Corbin completed a BA in economics at the University of Missouri-Kansas City. He lives in the Kansas City area with two cats and a yard.