Bungie’s 30th Anniversary event kicked off in Destiny 2 this week, featuring a wide range of weapons, cosmetics, and activities that celebrate both Destiny’s history and Bungie back catalog of games, including Halo, Marathon, Myth, and Oni. Among the festivities is a new six-player activity called Dares of Eternity – a competition framed as a game show starring a celestial being called the Starhorse. Dares of Eternity is, without a doubt, the most absurd thing to ever happen in Destiny. It’s bizarre, campy, filled with references and inside jokes, and indescribably joyful. Though it’s played as a joke, tonally, it feels like a great fit for Destiny 2, which has been teetering on the edge of absurdity since the introduction of The Drifter in the western-inspired Forsaken expansion – if not before. I wouldn’t want Destiny to be this wacky all the time, but for a special event like the 30th anniversary, it's perfect.

The hosts of Dares of Eternity are the Xur and a new figure in Destiny lore known as Starhorse, aka The Hyper Quantum horse, aka The Impossible Horse, aka The Hose From Beyond The Cosmos. According to Xur, we were selected by the horse to compete in the Mojoverse-inspired game show to reward us with prizes pulled from throughout the Paraverse. If you’re not a Destiny 2 player, you’re probably looking at me the same way Walt looks at Jesse when he tries to explain that Pepe the Frog is ‘based’. To be honest, I don't know what the hell I’m talking about either. Destiny lore is dense and complex with tons of history, but this is a game show about a magic horse. Just go with it.

Related: I Can't Believe I Waited So Long To Get An Emulator

Xur is certainly embracing the absurdity here. Normally the Agent of the Nine is a stoic and mysterious figure that speaks in riddles and vague references to higher planes of consciousness. In the Dares of Eternity, Xur is basically a meme lord. After introducing himself and Starhorse as the hosts, he goes on to commentate as if it were an episode of The Price Is Right. Xur mentions “amazing prizes” like a 55” machine gun and an all-expenses-paid trip to Europa. At the end of the show he even reminds viewers to get their ghost’s spayed and neutered. As you transition between arenas he’ll loudly proclaim the horse’s desire to see further combat or warn you to prepare for the ‘totally demented obstacle course’. It’s out of character in the sense that you wouldn’t expect Xur to be this meta, but it’s not out of character for Destiny 2. 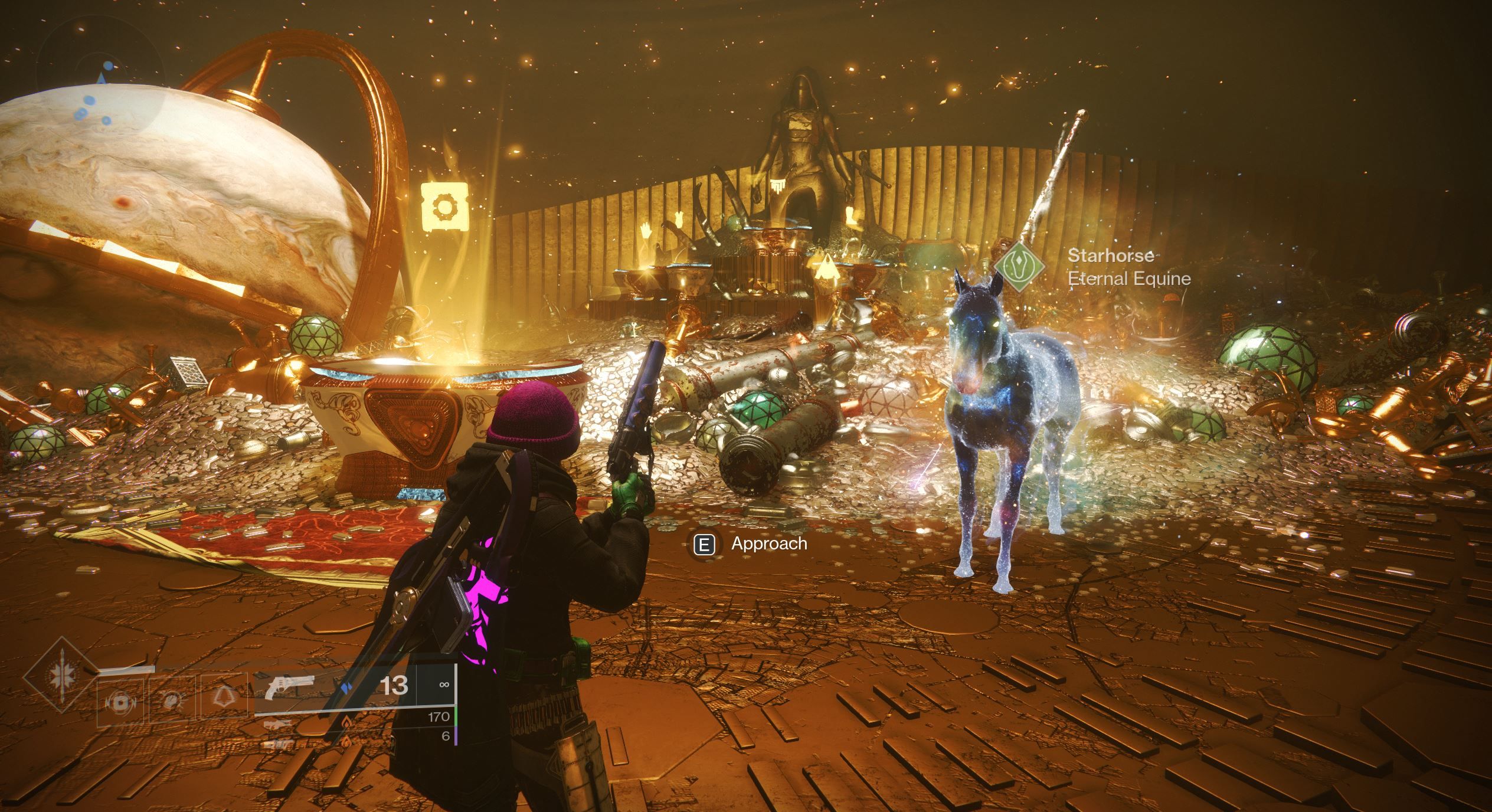 Bungie has always played it straight with Destiny, but it’s still a game about space magic, god worms, and wizards from the moon. It’s an epic sci-fi melodrama, but we can’t forget that levity and humor are an important part of the series too. Whether it’s Cayde-6’s beloved pet chicken Colonel or Failsafe, the malfunctioning AI that flips back and forth between sickly sweet and sarcastically bitter personalities, Destiny has always been a silly game. Dares of Eternity is definitely the furthest that the playful tone has ever been pushed, but it still fits.

More importantly, it makes Dares of Eternity more fun. Grinding the same activity for keys and Strange Favor for weeks and months always ends up eventually becoming a drag every season, but I keep jumping back into Dares of Eternity just to hear what Xur is going to say next.

I know I haven’t heard everything yet – and his script will probably change up week-to-week – but here’s my favorite line so far: If you spin the Wheel of Adversity and land on the Taken, Xur introduces them by saying “Assembled unwillingly from our studio audience, please welcome the Taken!” It’s a joke made exclusively for Destiny nerds, but it kills me every time.