A Simple Breakdown Of The Complex Elder Scrolls Universe 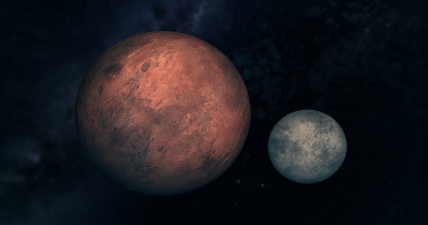 There are about a million different aspects of The Elder Scrolls that could be written about. However, if you happened to drop into the fandom by starting with Skyrim (or honestly, even if you did start the games at the very beginning), the layout of The Elder Scrolls universe can be extremely difficult to keep track of.

Due to the many planes of existence within the universe, this breakdown will focus specifically on Mundus, otherwise known as the realm that encompasses the mortal plane. Without going into much of the lore in this article—as that is an entirely separate project—here is a breakdown of how The Elder Scrolls universe is constructed. 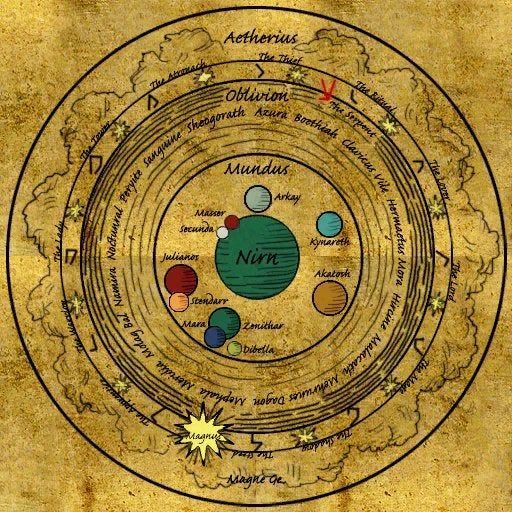 The name given to the totality of the universe is Aurbis, which encompasses all the different planes of existence.

The many mysterious planes inhabited by Daedra are referred to as Oblivion.

Considered to be the “magical planes,” Aetherius is thought to be the origin of magic and the arcane arts.

This is a place of utter nothingness. It is said that the void is from where the Daedra of the realms of Oblivion spawn.

The realm of existence that encompasses the mortal plane is known as Mundus. Within Mundus, we have Nirn, the mortal plane, Secunda and Masser as Nirn’s moons, and attendant Aedric planets.

The name that mortals use to describe the entire mortal plane within The Elder Scrolls universe is Nirn. Nirn was created by the deity, Lohkran, and the Divines. Nirn includes five main continents and a couple of other mainlands. 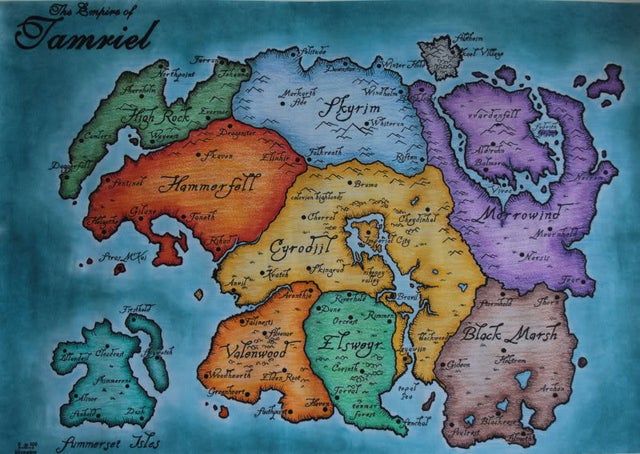 The continent of Tamriel is the largest continent on Nirn, and it is where all The Elder Scrolls games take place. It is a geographically diverse place, including mountains, tundras, deserts, swamps, and more. Tamriel is made up of nine main provinces.

At the southeastern tip of Tamriel, the Black Marsh/Argonia is mostly uncharted and made up of dense wetlands.

The setting for The Elder Scrolls IV: Oblivion is Cyrodiil. This province is in the dead center of Tamriel, and it is the home of the Imperials. It is mostly made up of forests and mountains.

The province of Elsweyr is divided into badlands in the north and a humid, tropical area in the south. It is the home to the Khajiit.

The setting for The Elder Scrolls II: Daggerfall is Hammerfell. It is on the west side of Tamriel and is mostly made up of deserts. The Redguard human race calls Hammerfell home.

The southern part of High Rock also makes an appearance in The Elder Scrolls II: Daggerfall. High Rock is divided into multiple city-states and is home to the Bretons. It is a coastal region in the northwest of Tamriel.

The province Morrowind is the setting for The Elder Scrolls III: Morrowind. It is in the northeast of Tamriel, and it is home to the Dunmer, or dark elves.

Located to the north, Skyrim is the location for The Elder Scrolls V: Skyrim. It contains five major cities and some of the tallest mountains.

The Summerset Isles are a set of islands in Tamriel that are the home of the Altmer, or high elves after they left Aldmeris.

The province Valenwood is mostly made up of forest wilderness. It is in the southwest of Tamriel, and is home to the Bosmer, or wood elves. 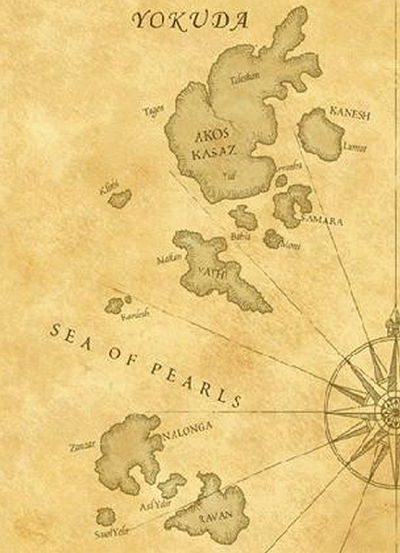 Unlike the continent of Tamriel, not much is known about Yokuda since it was nearly destroyed in a cataclysmic event. It is considered a “lost continent.” We do know that it has a rocky, desert landscape and was also the original home of the Redguards, until they decided it was uninhabitable. It contains four known islands.

The island of Akos Kasaz is one of the regions of Yokuda, and it was said to have been populated by Yokudan herding clans. It is considered to be the main island of Yokuda.

The island of Samara is located between the Azurian Sea and the Sea of Pearls.

The island of Kanesh is the closest island to Tamriel within Yokuda.

The island of Yath was located south of the main island. It was jagged and arid, and it happens open views that could go for miles. However, it was destroyed in the cataclysmic event. 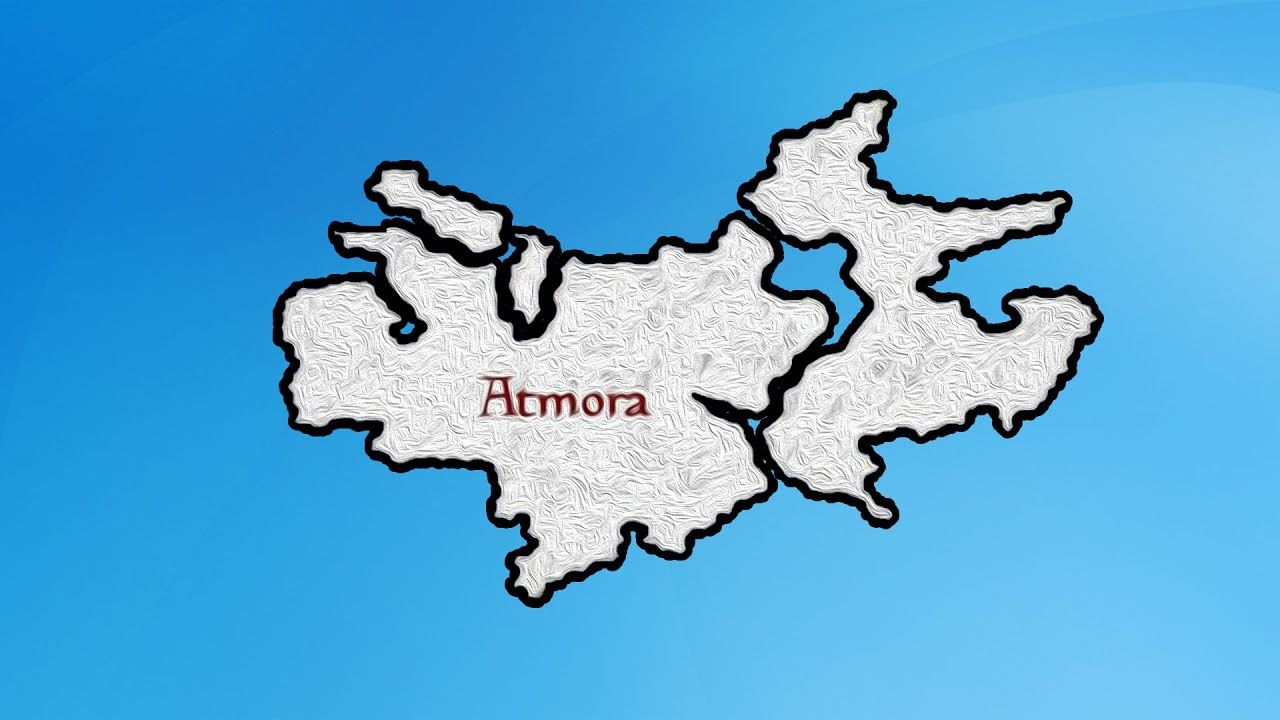 The name given to the frozen wasteland within Nirn is Atmora. It is separated from Tamriel by the Sea of Ghosts, and it was the original home for the Nords of Skyrim. 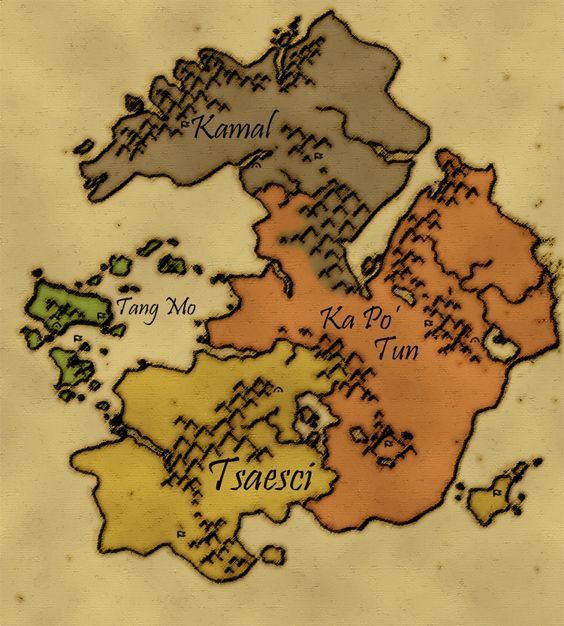 Almost nothing is known about Akavir, except that it is broken down into four main kingdoms who are at war with each other over race. It is thought that this continent was once one of the original homes for dragons. This is also where the Blades were originally from.

The kingdom of Tang Mo is home to an oppressed race of monkey-folk, and they are constantly being invaded by the other three races on Akavir.

Primal demons occupy Kamal, and they attack Tang Mo once every year.

The kingdom of Ka Po’ Tun is the home to the tiger people.

The largest and most powerful of the four kingdoms is named Tsaesci. This was the first region of Akavir to attempt an invasion of Tamriel. Supposedly, this is home to immortal vampiric serpent-men. 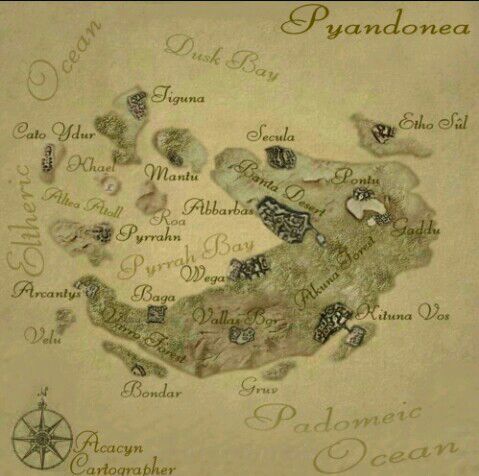 The island continent named Pyandonea is located to the far west of Tamriel, and it is the home of the Maormer, or tropical elves. The islands are made up mostly of dense rainforests. 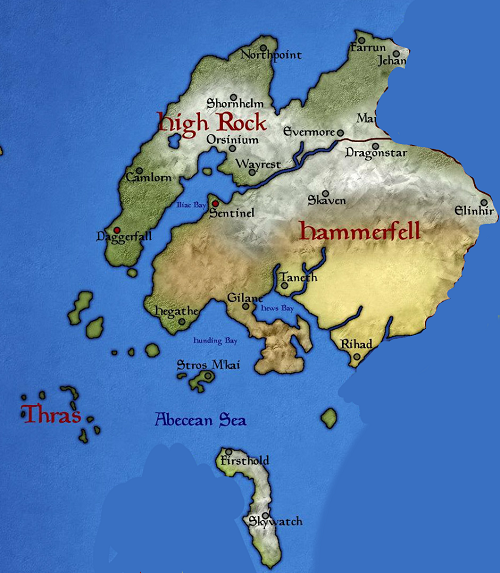 Also known as the Coral Kingdom, Thras is made up of islands that have always been a powerful, opposing force against the Summerset Isles.

The largest known island within Thras is known as Agonio. 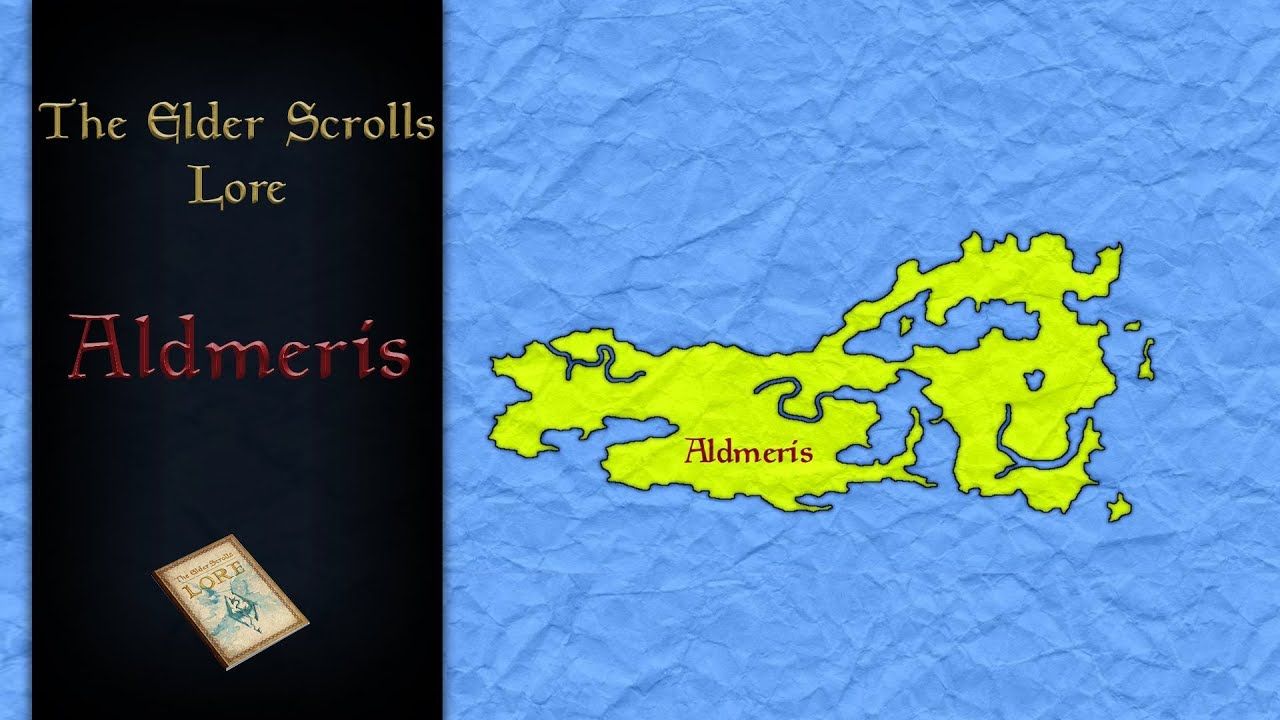 Almost nothing is known about Aldmeris, including whether it still exists. It is speculated that this was the birthplace for both elves and mankind. 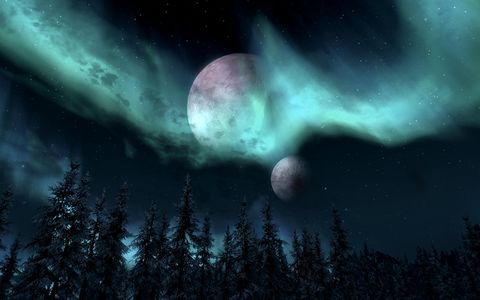 The smaller of the two moons that orbit Nirn is named Secunda. Secunda becomes the Blood Moon in The Elder Scrolls III: Bloodmoon, which is an expansion of the Morrowind game. This moon also goes by the names Jone and Shandar’s Sorrow.

The larger of the two moons that orbit Nirn is named Masser. It is red in color and goes by the names Jode and Mara’s Tear. 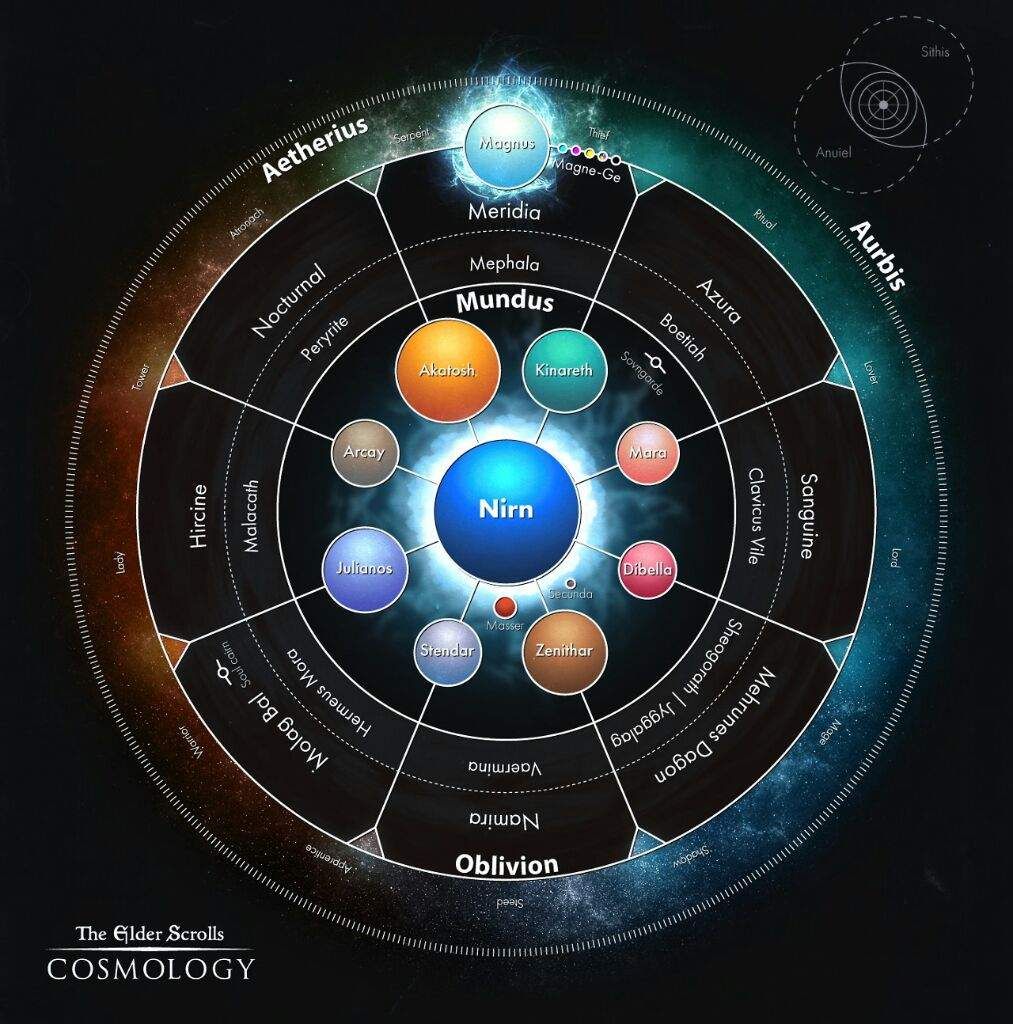 The Aedra, also known as “ancestors,” are one of the groups of immortals who helped to create Mundus. Thus, they are seen by most mortals as gods. The attendant Aedric planets, also known as the Divines, are thought by many to be one and the same as the Aedra.