If there’s one thing we need right now, it’s more ways to relax, and Calico is here to help. The adorable life sim developed by Peachy Keen Games sees you taking control of a magical girl tasked with rebuilding the town’s cat café.

You’ll make cakes, decorate the café, and befriend the locals as you venture around the magical town. Find and befriend animals, complete tasks for your neighbors, and even uncover a mystery in the area. Calico is a cute and colorful community sim with a very definite target market… and a lot of cats.

As the game begins, you’ll find yourself in a fairly bare café with a choice of three different themes. Whichever you pick, you’ll receive some items of furniture in that style to get you started. Then, you’ll need to earn enough money to purchase upgrades and extras. Money is earned by selling items in the café and by completing tasks set by your neighbors. As well as furniture, you can also purchase new clothing and recipes. 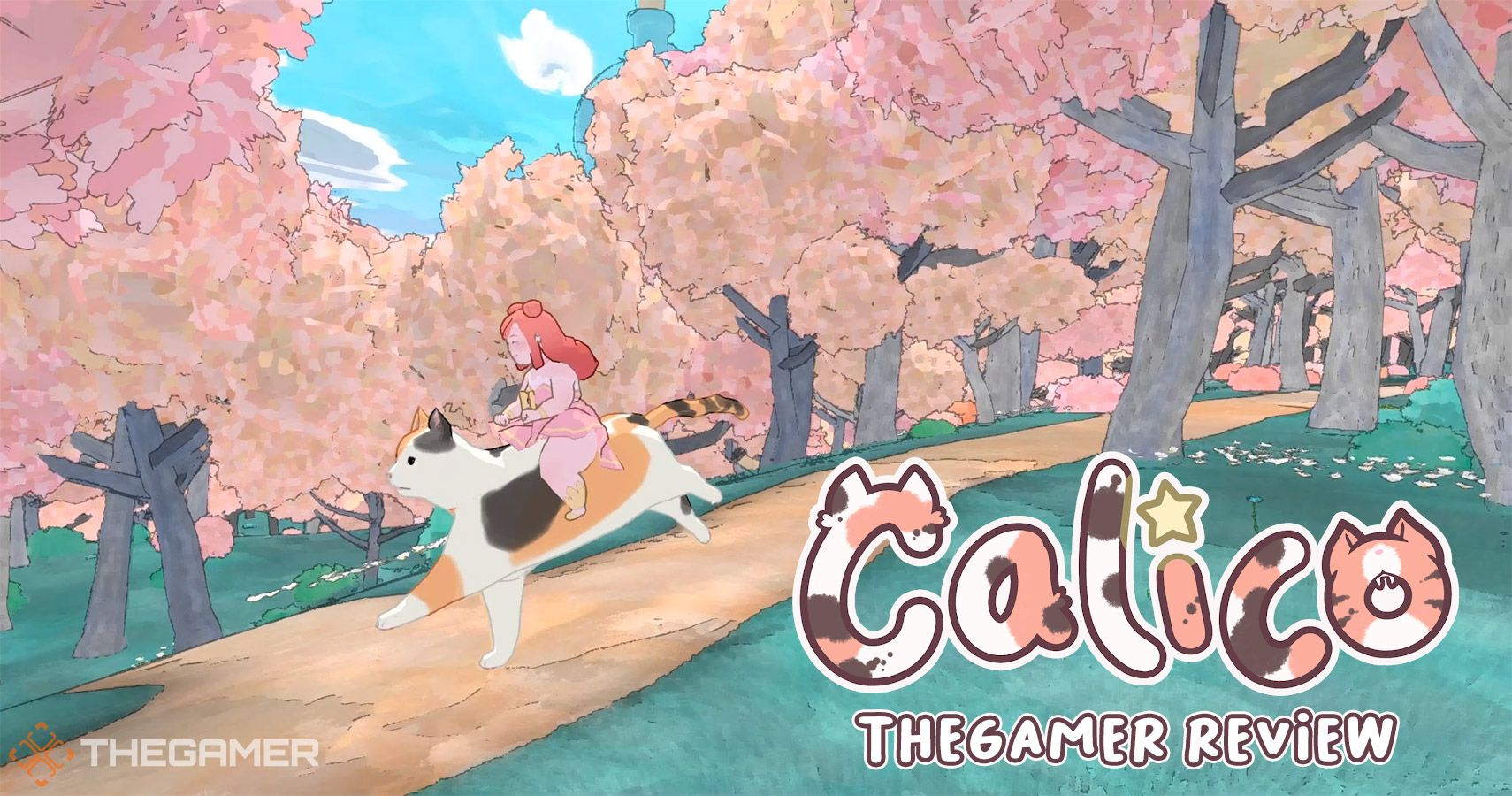 The café itself has some grounds surrounding it and a cute exterior that opens into the interior you can see above. Through the doorway at the back is your kitchen, where you prepare food to sell by playing a minigame. Finally, your bedroom is upstairs and this is where you can sleep each night to save your progress and skip to the next day.

Every day, your main objective will be to check the café is still stocked before you go and speak to your neighbors. They’ll give you different tasks to do involving making deliveries, finding lost animals, and sourcing specific types of furniture for the cat café. There’s also the main storyline to follow that involves magical girls, potions, and the mysterious-sounding owl club. 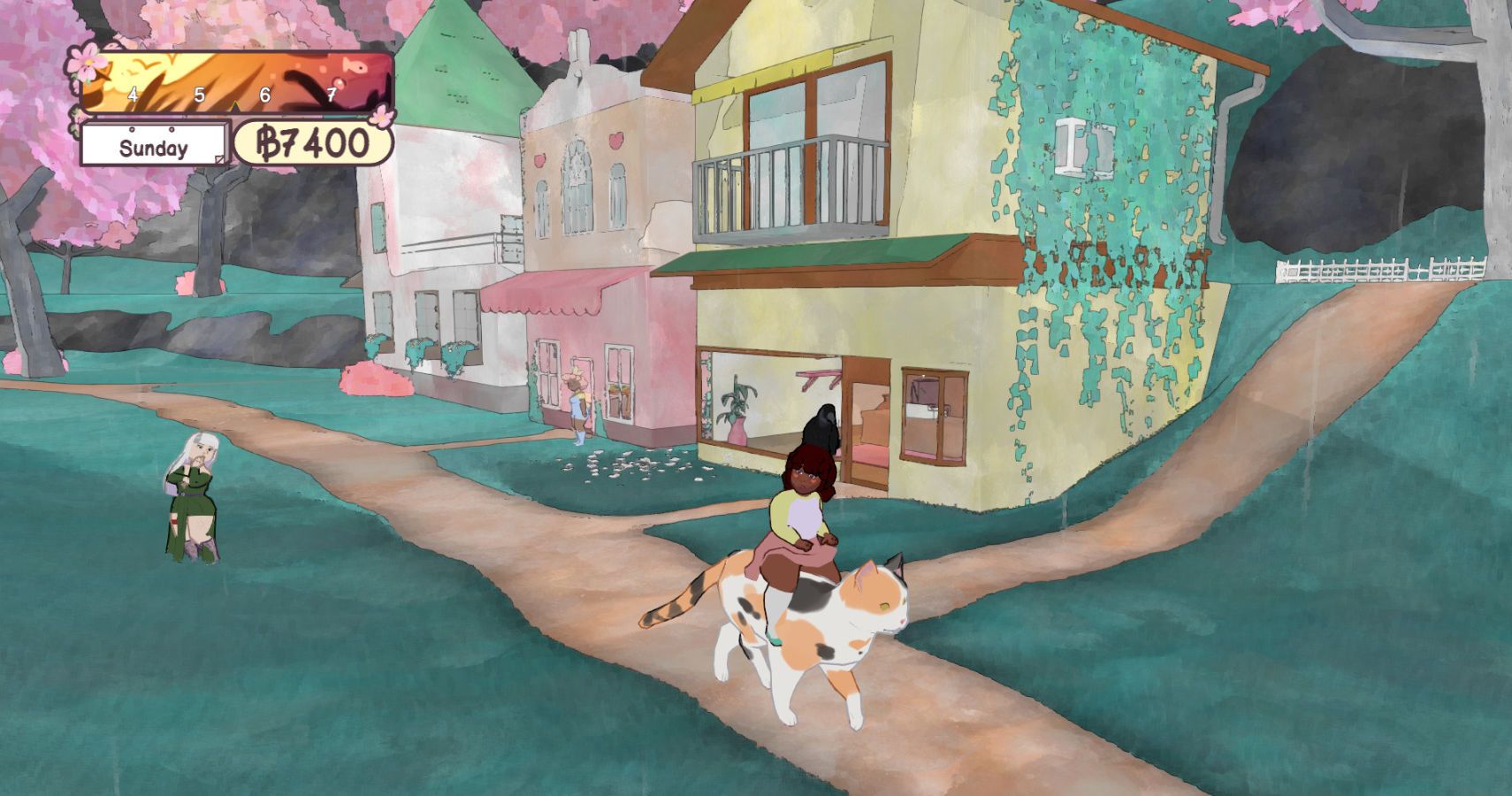 While your new establishment is considered a cat café, you can actually have all kinds of different animals inside it. You can also have some of them follow you, or grow to a size where you can ride them to get around quicker.

Animals are found all over the town and include cats, dogs, birds, foxes, rabbits, and more. There are even polar bears in the mountains! As you come across each one, you can pet them, play with them, pick them up, and command them. There are three commands: follow, go to the café, and be free. You can have up to five animals following you and ten in the café. Any animal in the café will wander around inside or outside the building within the lot boundaries. Following animals will literally walk along behind you, and animals you set free will be logged in your animal list, but will continue to freely roam the local area.

All the animals are named by default, but any that don’t belong to someone else can be freely adopted for your party or café and can be renamed. 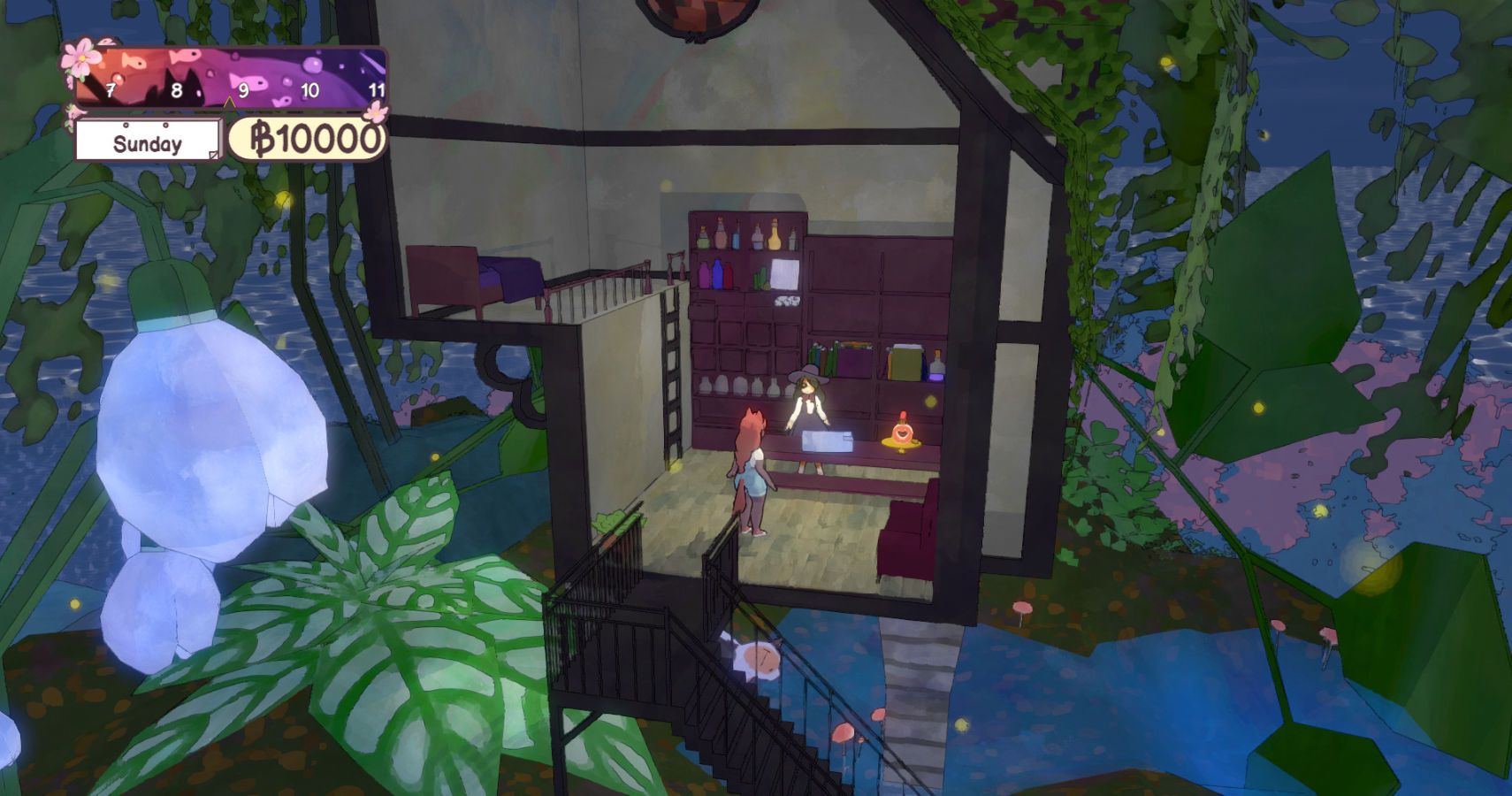 The first thing you’ll notice is that the controls are slightly odd. Not everything is intuitive and I found myself needing to refer to the onscreen prompts quite a lot in order to find my way back out of menus, especially the clothing menu which you randomly exit by pressing the + button, usually several times.

I played the Switch version and the main controls for moving and jumping are fine, but the others have some definite quirks. For example, X will make you mount a large animal so you can ride it. However, this is fiddly and you need to stand in a very specific place to make it work. I also cannot take screenshots, since the feature is “unsupported,” so all my images have had to come from the selection on Steam.

Calico is also still quite glitchy with a lot of clipping through buildings and people as you navigate the area. However, the developers are a two-person small team and are actively working to fix some of these issues, so much of this will hopefully vanish over time. 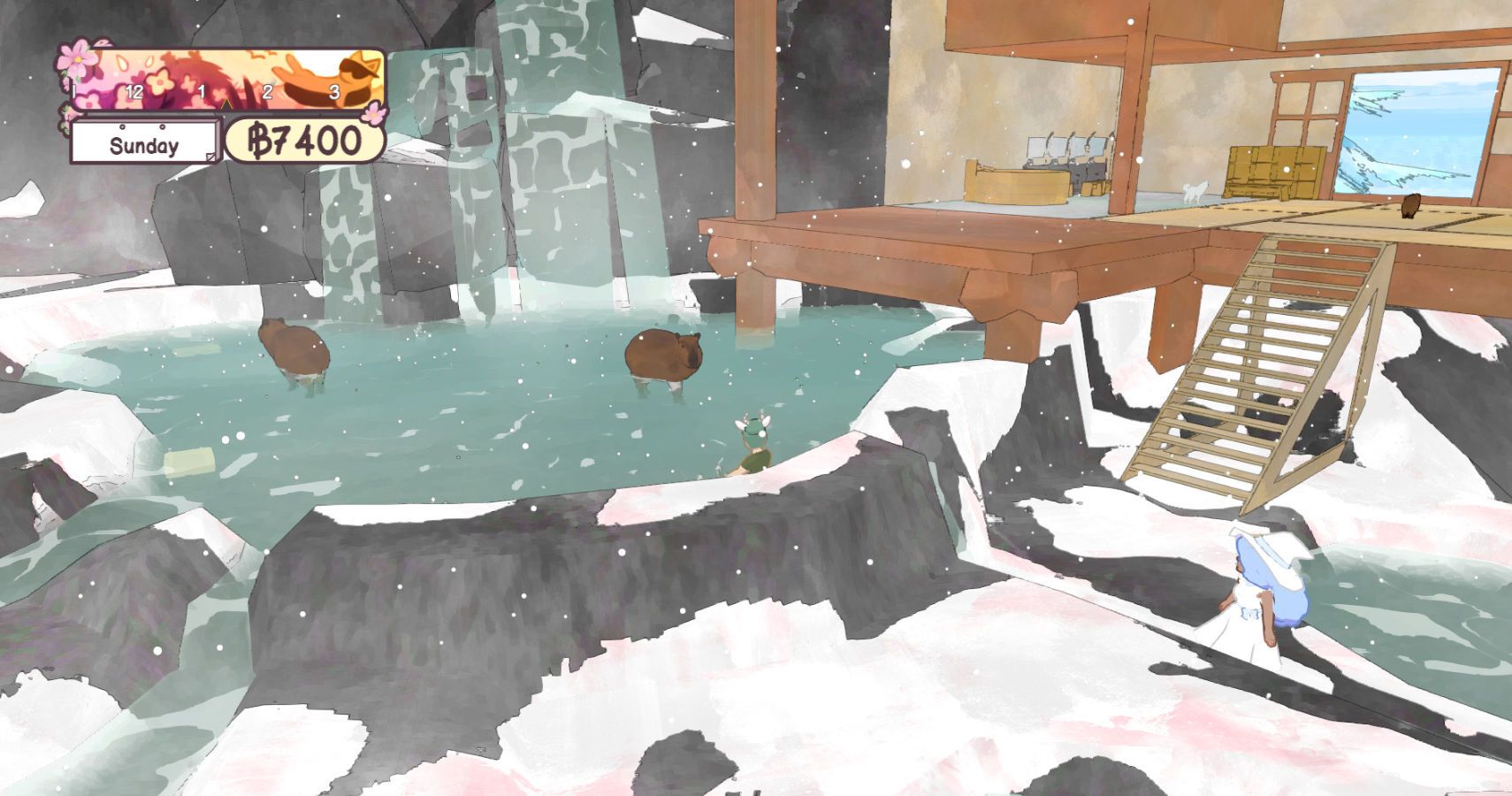 Despite the glitches, the game is playable, but there were a couple of things I found odd. The first is the cooking minigame which involves you becoming tiny and throwing things into a bowl where they magically become a product you then throw onto a tray. This process will need to be repeated for every item you need to restock, and I just found it got dull quite quickly. Items also often seem to go in random directions and at different distances.

The second thing that’s weird is that I’ve yet to see a person in my café. I’ve had quests saying that characters will be coming over for a meal or a date in the morning, but when I wake up that morning, I just get a notification that the event is over and I need to ask how it went. Despite both myself and my daughter playing for hours, neither of us have seen anyone inside the café, although we have got some patrons outside.

The food vanishes, but it seems like they’ll only come in while I’m off running errands. As such, I’m not entirely sure who actually runs the place. Maybe it’s the dog that sits with its backside in the café and its head in the kitchen? 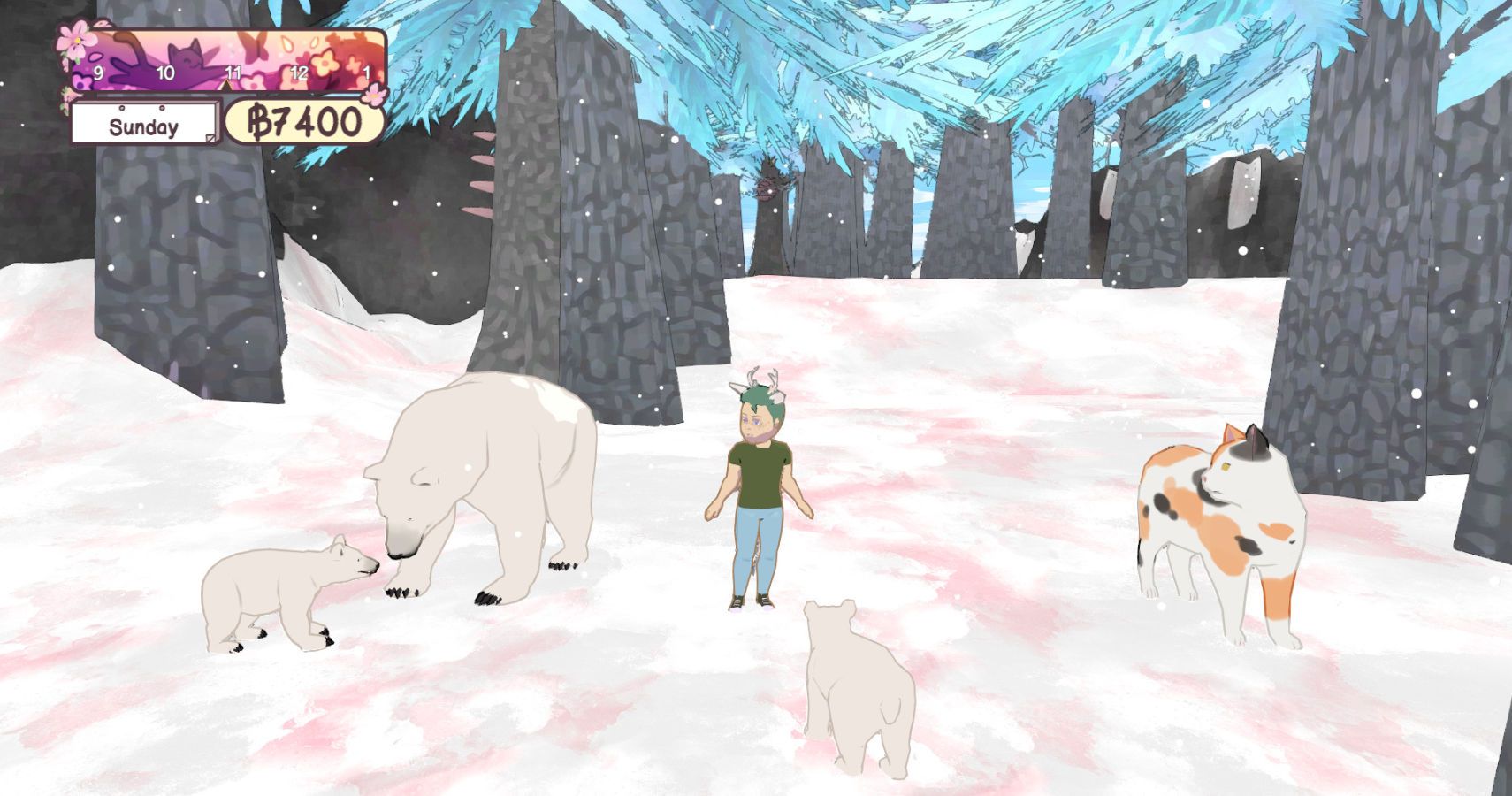 Despite its issues, the game was still a huge hit with the person in my household that likely perfectly fits the target demographic: my thirteen-year-old daughter who loves magical girl anime, animals, and anything crazy.

After she took the controls, she immediately discovered that “store animal” means you can put it on your head, and set about seeing how many cats she could carry at once. Her record is four. She had one on her head, one in her hand, was riding one, and had stored a fourth on that large cat’s head. This is now known as multi-catting and is how she travels around town.

She loves the potions, the animals, the cute furniture, the magical girls, the cat people, and even the glitches and bugs. When her fish started floating above the pond she was in hysterics and has decided that these things just add to the fun. 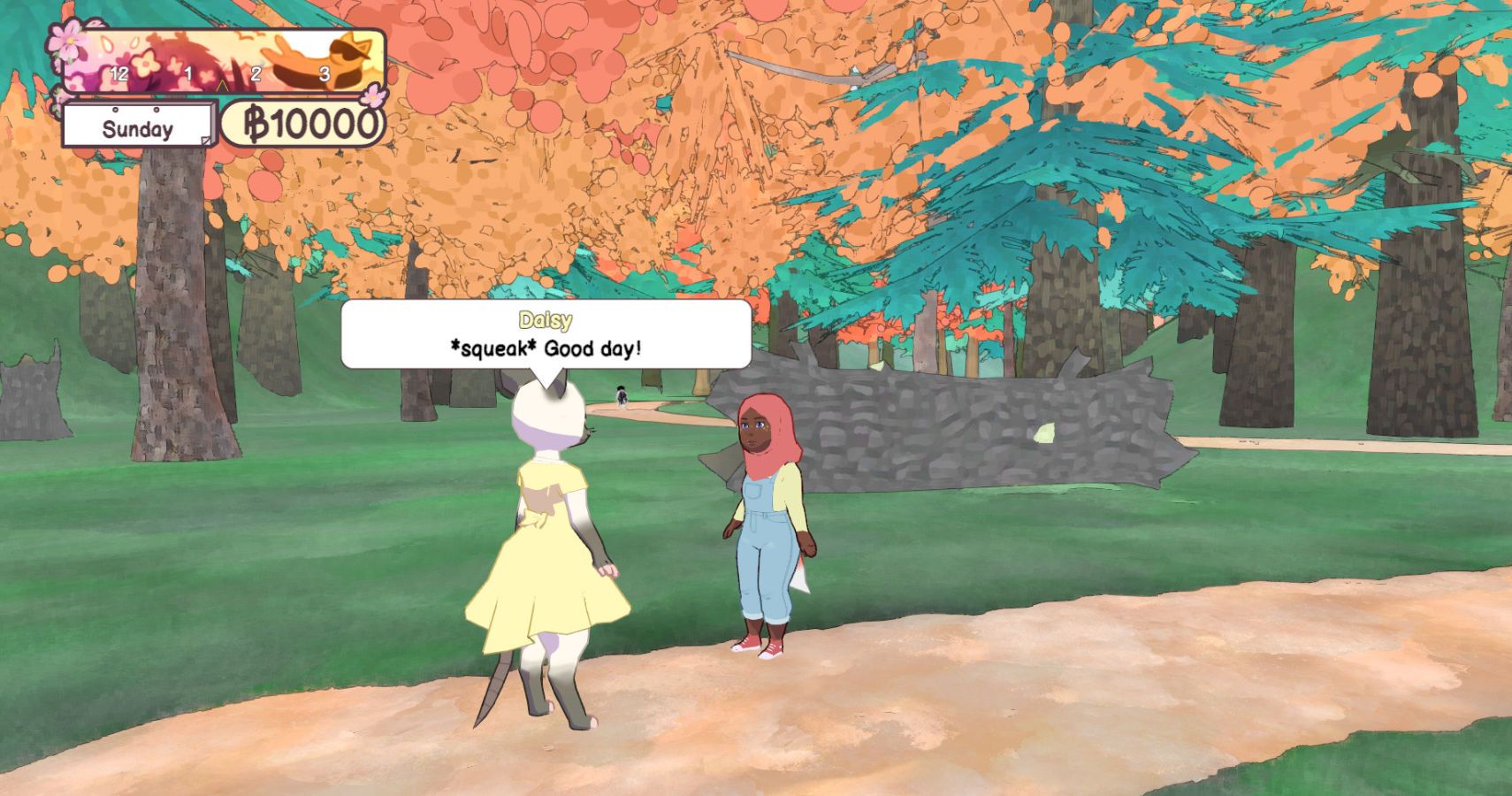 It’s difficult to deliver a verdict on Calico, as my experience and that of my teenager’s was different. While for me, it’s an average game – enjoyable, but with enough odd quirks and issues that I’d probably rate it around a three – my teen would give it a five, hands down.

Overall, the game does deliver what it promises: magic girls, animals, cute furniture, a relaxed pace, and the chance to bend the rules with magic and ride a giant cat. However, it also has some glitches, a few quirks in its gameplay, and some slightly iffy controls. How much you get out of Calico will truly depend on how much you love its themes as well as your tolerance for glitches. It will also matter if you were looking for a game that lets you actually run a café, since this aspect of gameplay is surprisingly passive.

While I’m unlikely to play frequently, the same can’t be said for my teen, who has already swiped my Switch Lite again. Therefore we’re going with a score we can agree on between us and I’m trusting that the development team, who have been incredibly open and responsive to feedback, will continue to work on the issues. As there’s always a patch about to drop, this is something that looks promising – just like Calico.

A Switch copy of Calico was provided to TheGamer for this review. Calico is available now for Nintendo Switch and PC.

Next: Immortals Fenyx Rising Review – Gods, A Monster (And A Great One At That)