In 1994, Doom was king. id Software's influential shooter, which was two games deep by this point, was carving up sales records like a blood-splattered chainsaw slicing through a cyberdemon. It's no surprise, then, that other developers wanted their own piece of the action. One of the many reasons people loved Doom was how moddable it was, and some of the most popular player-made levels and total conversions released on the early internet were Star Wars themed. Catching wind of this, LucasArts decided to make its own officially licensed Doom-style FPS set in a galaxy far, far away, and Dark Forces was born.

If you've seen Rogue One, you'll know that reluctant Rebel Alliance hero Jyn Erso infiltrates a heavily guarded Imperial base on the planet Scarif and steals the Death Star's secret plans, ultimately leading to its destruction in A New Hope. But this wasn't the first piece of Star Wars media to tell this story. In Dark Forces you play as mercenary Kyle Katarn, who steals the plans from an Imperial base on Danuta, a remote mining planet. Alas, since Disney's $4 billion acquisition of Star Wars, Katarn's heroic deeds in Dark Forces have now been declared non-canon. That's the price you pay for being part of the Star Wars Expanded Universe.

Okay, so Erso's story is more exciting. Watching her dodging AT-ATs and TIE Fighters on a lush tropical world is a lot more thrilling than Katarn running down a few corridors and shooting some stormtroopers. But give Dark Forces a break: it's an early 3D shooter from 1995, not a 2016 movie with a $265 million budget. However, while Erso securing the plans in Rogue One is the end of her story, it's just the beginning of Katarn's. A year later he finds himself investigating a new type of stormtrooper being secretly created by the Empire: the dreaded Dark Trooper, which would go on to appear in several other Legends stories. 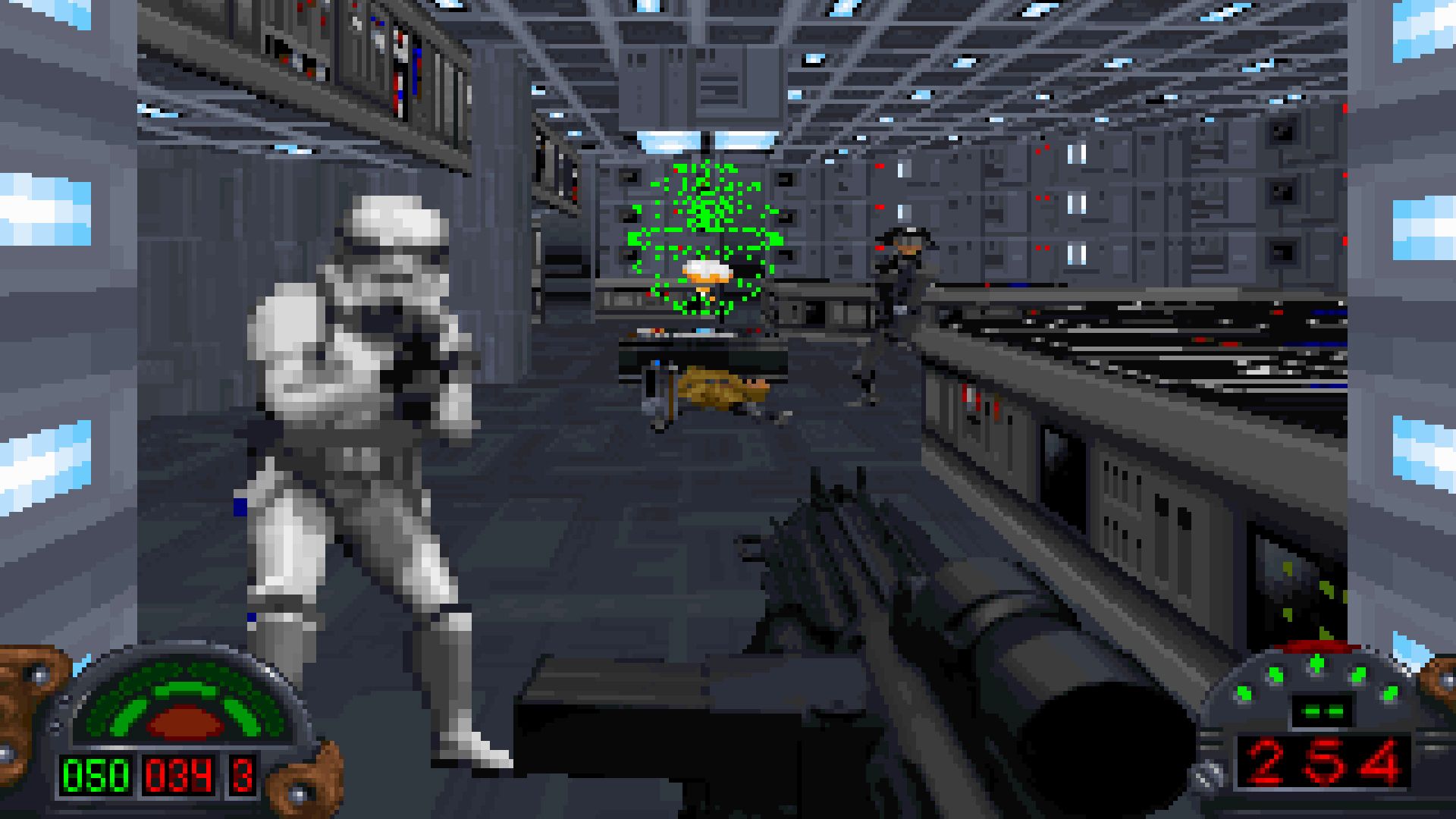 This is the first major thing that sets Dark Forces apart from Doom. While the narrative in id's game is economical by design, LucasArts injected its Star Wars shooter with a proper, fleshed-out storyline. Dark Forces features detailed mission briefings, cinematic cutscenes, voice acting, and a main character who's more than just a faceless killing machine. Early in its development, Luke Skywalker was supposed to be the hero—but was eventually swapped out and replaced by Katarn to avoid conflicts with other Expanded Universe media. It's a quality Star Wars story in its own right, and made Kyle Katarn a fan favourite.

LucasArts could have just made Doom with stormtroopers, but it went to great lengths to make Dark Forces stand out. It shares some similarities, with similar-feeling combat, labyrinthine levels, and coloured keycards. But it does some things Doom could only dream of at the time, including levels with multiple floors, animated textures, 3D objects, and atmospheric haze effects. The game's bespoke Jedi Engine was written from scratch by programmer Ray Gresko, and LucasArts was able to pull off some impressive in-level stuff with it, like seeing Katarn's brilliantly named ship, the Moldy Crow, taking off and flying away.

That may sound unimpressive by modern standards, but in the mid-'90s it was mind-blowing to see things like this in real-time outside of a cutscene. Also, unlike Doom, Dark Forces let you look up and down too. This was still a rarity in first-person shooters of the era, and further evidence that it was more than just a Doom clone—which were so common at the time, it was basically a genre. Dark Forces also featured some rudimentary 3D world navigation, including leaping between platforms and shimmying along narrow edges. It was pretty pioneering stuff, at least until Quake launched a year later and near-instantly made it look primitive. 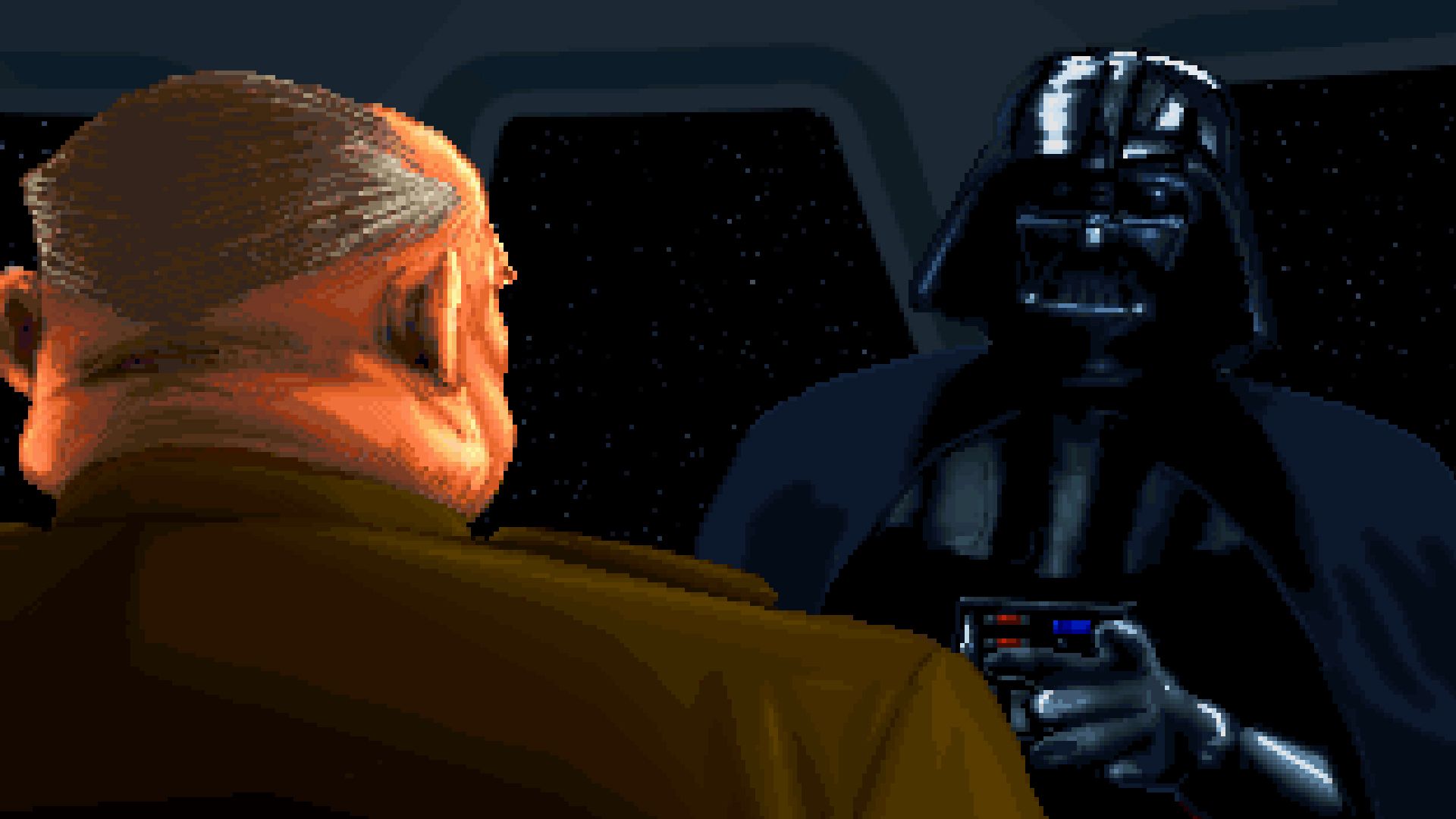 Kyle's mission takes him to locations including the planet Coruscant, a ship owned by Jabba the Hutt, and the Executor, Darth Vader's personal Super Star Destroyer. Vader himself even makes an appearance, played by a very good soundalike. The environments all look pretty flat and boxy, because 3D technology was still emerging at the time, but despite the technical limitations, the feeling of being in Star Wars is palpable. Firing a blaster rifle at a stormtrooper, hearing the proper sound, and watching them theatrically tumble backwards like in the movies still feels great. The game holds up surprisingly well 26 years later.

Dark Forces was a hit. Not on the level of Doom, of course, but enough to spawn an even better sequel, in which Katarn becomes a Jedi. That game, Jedi Knight: Dark Forces II, is more fondly remembered than the original—thanks in large part to its tense multiplayer lightsaber battles. But the original FPS is still worth revisiting today. When other developers were churning out low-effort Doom copies to make a quick buck, LucasArts not only used its FPS to tell a great Star Wars story, but attempted to make some advances in the genre too. Its efforts were overshadowed by Quake in 1996, but so was pretty much every game that year.