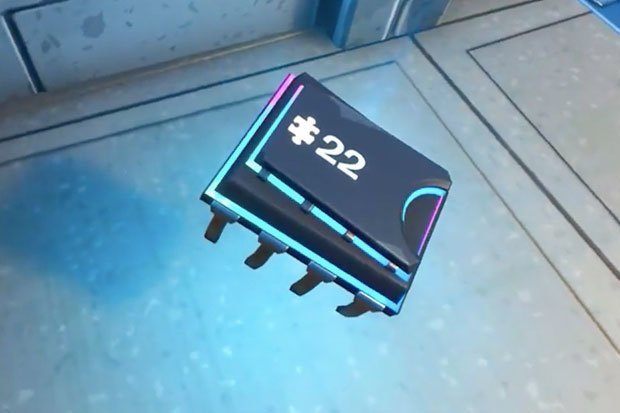 Another new Fortnite Fortbyte puzzle piece is now live as of Sunday 19th May because clearly Epic Games didn’t think you had enough to be getting on with, in Fortnite Season 9.

Today’s brand new puzzle piece is Fortbyte 22 with a clue that reads ‘Accessible by using Rox Spray in an Underpass location’.

So gather round Fortnite players. Put aside your platform differences. Whether you’re playing Fortnite on PS4, Xbox One, Switch, PC or Mobile, you’ll want to read this to understand how to find and collect this later Fortbyte.

Once again, we’re diving straight in. No more explaining the who, whys and wheres of Fortbytes. You’ve had a week to read up. That said, if you’re still lagging behind, click this link to learn more > What are Fortbytes? Where to find Fortbytes? And what the Fortbyte Rewards are?

It’s unlikely that today’s Fortbyte 22 puzzle piece will reveal the big secret, but we anticipate it will have something to do with Fortnite Season 10 in the long run.

For now though, read on, we’ve got another Fortbyte guide for you to digest to help find Fortbyte 22.

Looking for more Fornite Season 9 help? We don’t blame you, Epic Games crammed an awful lot into the Season 9 Battle Pass. Even if you’re a pro, it’s not always easy when you can’t remember where to go when you have to visit an oversized phone, big piano and giant Dancing Fish Trophy locations or Fortnite Sky Platforms. And if it’s not Week 2 challenges that’s got you busy, it’s finding those new Fortnite Fortbyte locations. It’s not all bad though, sometimes you can relax and simply enjoy the madness of a Fortnite John Wick event.

Fortbyte 22 Accessible by using Rox Spray in an Underpass location

Unlike Saturday’s incredibly short Fortbyte 8 Location puzzle, today’s Fortbyte guide requires a wee bit more explanation. Lucky for you then I’m one hour early to meet my pals before Leyton Orient at Wembley, so I’ve all the time in the world to explain what you need to do.

First of all, you need to make sure you have the Rox Spray equipped on your emote wheel before the game starts.

You should have received this with your Battle Pass at the start of the season. And since you need the Battle Pass to even start collecting Fortbyte’s in the first place, we shouldn’t have any problems, should we?

Equip the spray and start the match, divebombing straight for Neo Tilted (Formally Tilted Towers) on the map. As one of the busier locations in the game, watch your 6 the moment you hit the ground.

You need to head towards the underpass next to the Nugget Hut store. Head into the underpass and you’ll need to spray on the floor in the corner, a few yards from the front of the truck.

As soon as you do, the Fortbyte will appear, in all it’s glory. Ready for you to collect and move on. No spray? No Fortbyte.

If you want some extra help, we strongly suggest giving the above YouTube video from Gattu a watch.

With the Fortbyte found, make sure you finish the match. And that’s it. Good luck!