When you’re constantly tuned into video game culture, it’s tough to make time for anything but the current big releases. That’s especially true when E3 looms over us like a dark cloud made up of countless digital showcases. But when Guardian of Lore came my way, I knew I had to fit it in my schedule. Not only was it a nostalgic platformer with interesting narrative ideas, but I also connected to it on a personal level. The end result is a challenging (sometimes frustratingly so) dive into a culture that doesn’t see much screen time in video games.

Guardian of Lore sends you on an adventure through real Latin American folklore, something that I wanted to know more about given that it’s my heritage. I didn’t realize there was a legend behind the Yerba Mate beverage, and I didn’t know what an Aya Huma was. Guardian of Lore teaches these stories by having main character Sayri literally delve into them. As the guardian of a magical library, Sayri is tasked with stopping evil creatures from devouring books that contain the last stories of native cultures. The evil creatures are dressed like Conquistadors, giving the narrative a theme of fighting colonization. 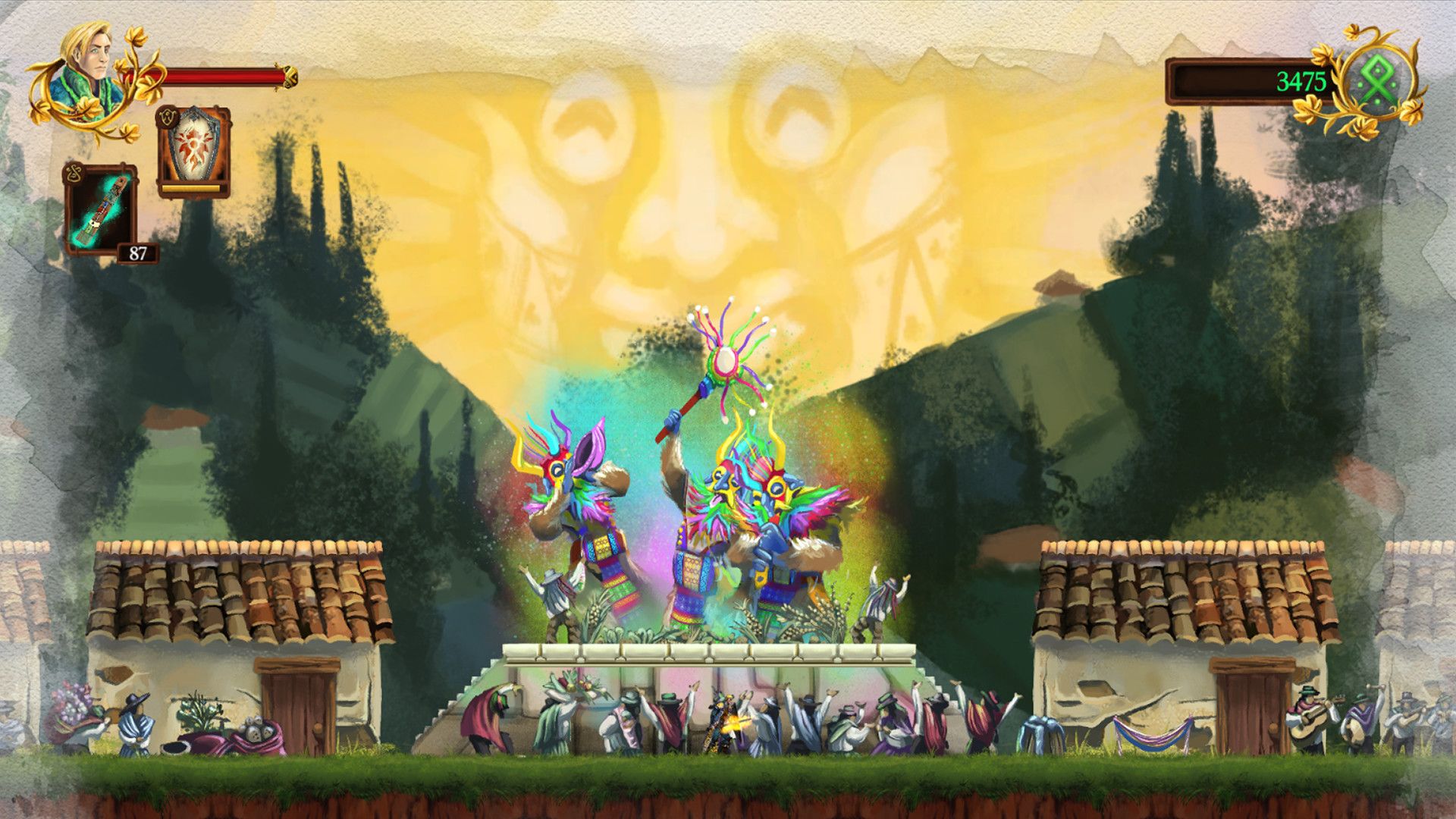 I appreciate this theme, and I appreciate how it is delivered. Like many 2D platformers of old, the story is given through a short cutscene in the beginning. You’re then plopped into Prince Sayri’s fancy boots as he discovers his destiny of guarding the library. One could skip it if they just want to play a game about hopping through stories and fighting monsters. But if the themes are important to you, you’ll appreciate both the thematic and literal effort to preserve Native American culture.

One thing I did question was the decision to make Sayri blonde-haired, blue-eyed, and pale. He’s supposed to be a descendant of the conquering kingdom, so I read it as him being European. There’s even something cool there about a descendant fighting to protect a culture his ancestors destroyed. And his name, Sayri, is Quechua for “prince.” So he could be a mix of Spanish and Native American, and many Latin Americans are. It’s a neat detail after some research, but my initial impression was that it was weird to be saving the culture as (what looked to be) some white dude. 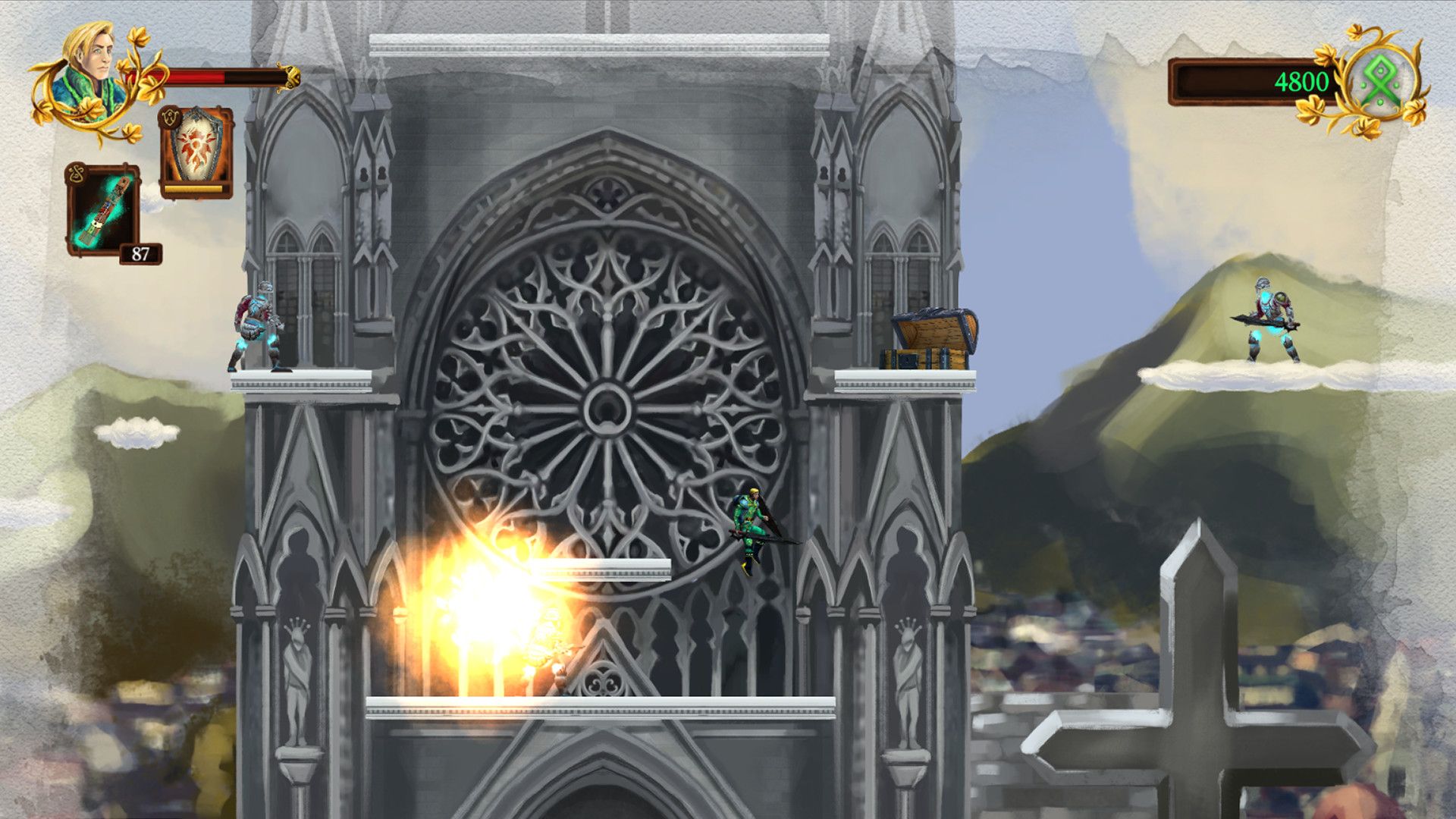 On the gameplay front, Guardian of Lore goes hard on the classic style of platforming. I learned this personally on the first level, where a section has you making precise platform jumps over a body of water. Waves frequently crash, threatening to knock you off of a platform or smack you down mid-jump. Enemies also wait on several platforms to foil you even if you make your jumps. Falling into the water is an automatic death, which takes away knowledge, the very currency needed to cast spells and buy/fix weapons. My issue is that the waves came too frequently and that the controls didn’t feel tight enough to ask for such precision. Getting through felt less like a victory and more like a “never again” moment. It’s not unfair or glitchy, it just seems designed to require the timing that comes with practice.

Combat is much the same, with bosses being able to take out a third or half of your health in one blow. You have a healing spell and food for recovery, but boss fights are still an exercise of avoiding every attack while inflicting small amounts of damage on a huge health bar. I realize that sounds like every boss fight ever, but the difference here is that it falls a little too much into the “learn the boss or do it all over again” pattern. Like the waves, I left the first boss feeling that I was glad it was over. But guess what? A key part of Guardian of Lore is replaying levels.

Because you’re protecting stories from the inside, your goal is to see them play out the right way. That might mean finding and rescuing a key character or avoiding a certain location. Many times you simply don’t have what you need to get it right the first time, so you have to replay the stories multiple times. It’s a fun idea narratively, as I’m a sucker for “What if?” situations. But it also means going up against the same bosses or draining platforming sections repeatedly.

I love that Guardian of Lore exists, and I hope many others discover the stories it has to tell. Unfortunately, I don’t think I’ll stick with it as my E3 appointments are closing in fast and I don’t feel particularly motivated to revisit the sections I found frustrating. For those who love the unforgiving nature of retro platformers, though, I highly recommend it. You don’t see tales like these told often in gaming.