Heroland Review: Must Be This Bored To Enjoy The Ride

If you’ve ever dreamed what it might look like if someone capitalized on the excitement and glory found in all your favorite RPG’s and created a theme park simulating the experience of becoming a hero… then you’ll have to hold on to that dream a little longer because no one’s been bold enough to create that! However, what the video game publishers and developers behind XSEED Games and Marvelous USA, Inc. have done is create a video game based on that exact premise. Welcome to Heroland, a game where anyone can be a hero. Well, everyone except for you, that is.

I was initially drawn to the game because of its My Hero Academia-like premise, the charming pixelated art style, and the Disneyland-esque setting. One of the strongest overall assets of Heroland is its cheeky self-awareness when it comes to critiquing standard tropes in the RPG genre, but that heightened awareness also serves as the game’s biggest downfall. Heroland begins as a charming and cheeky satire with a lot of promise. Unfortunately, the shtick grows old very quickly. 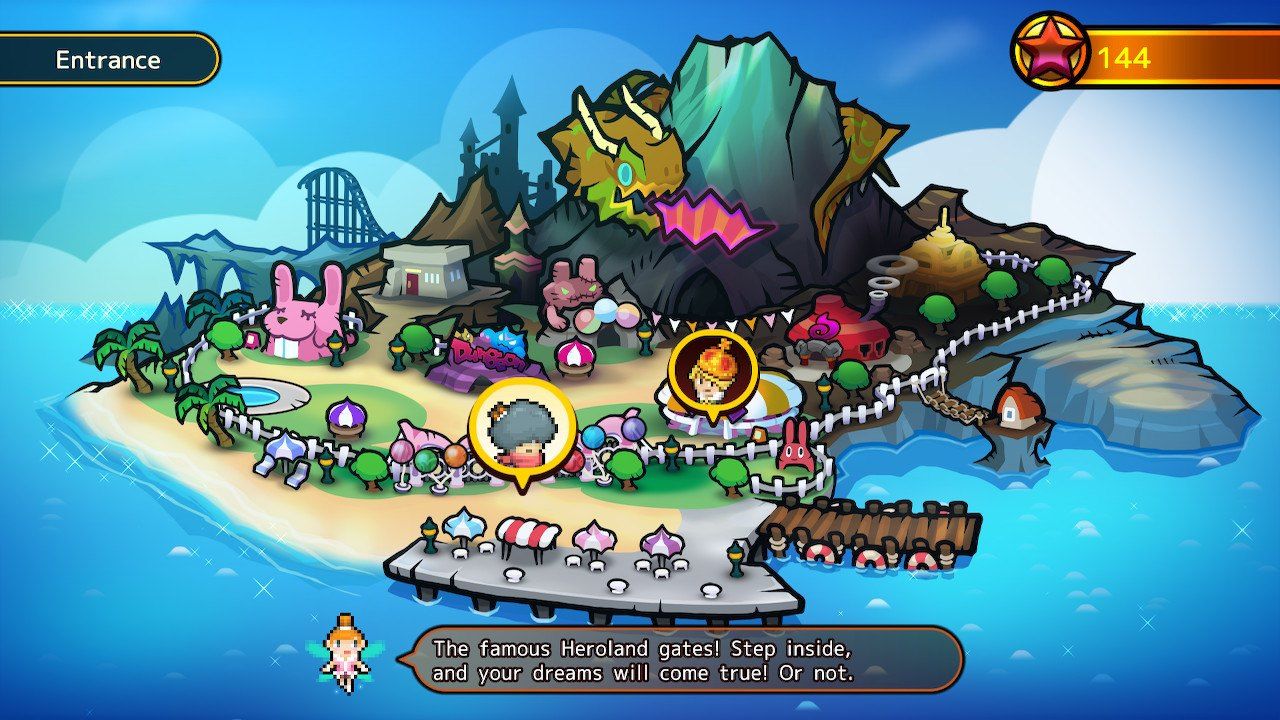 Players take on the role of a young boy named “Lucky” (not his real name, but that’s what everyone calls him) who gets hired as a part-time tour guide at the eponymous park. As a tour guide, Lucky must guide guests through various dungeons in the park, where costumed cast members pop out and simulate the experience of fighting off real monsters in an RPG. His first guest is Prince Elric of the Knowble Kingdom, an unlucky lad who’s fallen to 18th in line to inherit his throne thanks to some wacky and ridiculous surprise circumstances. The young (and gullible) prince hopes to reclaim his place as first in line by defeating the Dark Lord, the rumored boss of Heroland.

The first thing I noticed while playing is the adorable art style each of the characters is rendered in. Each character is designed as a 2D pixelated figure existing in a 3D world. I wasn’t expecting much in terms of animations, but the game surprised me in a charming way. Not only do characters hop around the screen to move around, but they react to other characters despite their two-dimensional limitations. They’ll shake around when they’re excited or grow larger than life when angry. Despite the dimensional limitations, the game’s visual appearance is delightful and dynamic to watch.

The writers of Heroland have also done a pretty solid job with the story’s dialogue. Creating an RPG surrounding a theme park that’s based on RPG games already serves as an incredibly self-aware backdrop, and the writers have not only leaned into that, but have wholly embraced it. Characters constantly break the fourth wall by commenting on tropes and mechanics in the story itself, resulting in hilarious exchanges throughout the game. 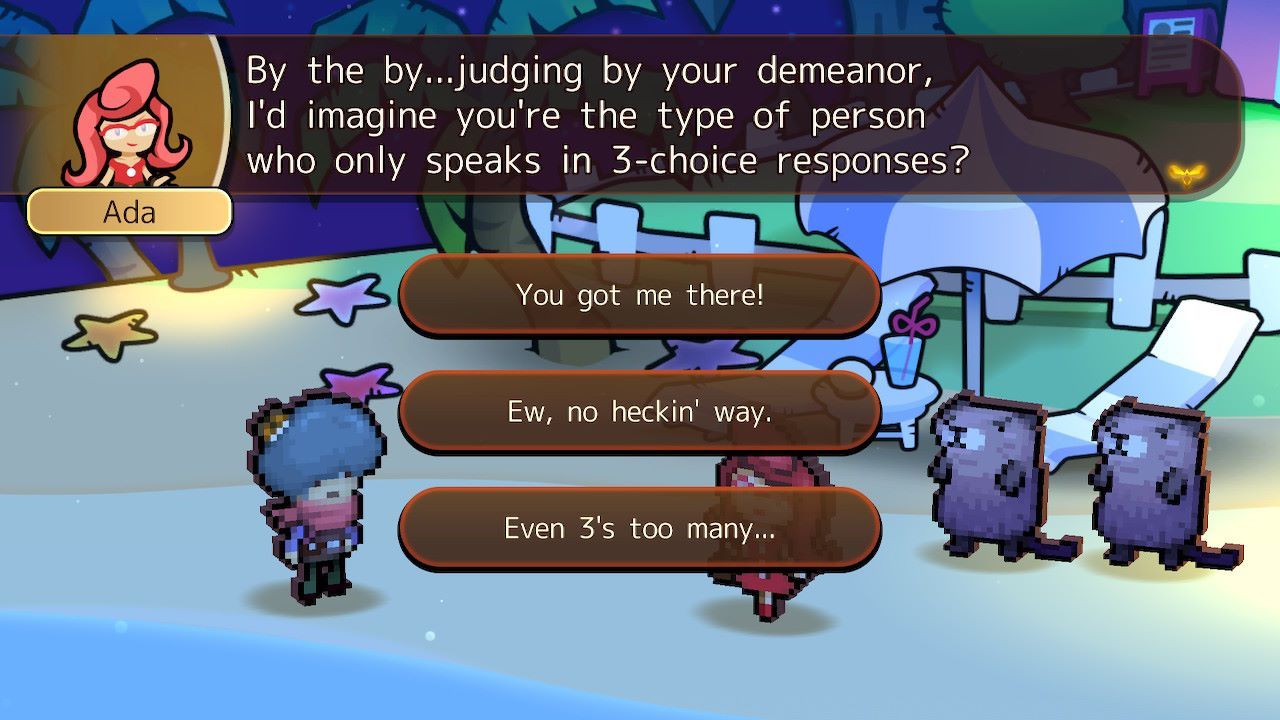 Finally, the park itself is great. Heroland has everything a theme park should have. Gift shops, overpriced stuffed toys, an expansive map, delightful theme park music, melodramatic cast members, and capitalist-hungry people at the top. It almost makes you wish that this park was real.

All Fluff, No Substance

Unfortunately, while the art style, writing, and setting are all cute and dandy, the game’s story and fighting mechanics are overall pretty underwhelming. The main plotline of Lucky accompanying Prince Elric on his quest gets old and repetitive pretty quickly. Not only that, but the presentation of the story feels like a haphazard mess, with the character’s changing motivations and desires constantly. One minute Elric has called off his entire quest, and the next he’s back and ready to fight. Additionally, the game’s cast of characters is vast, but because the plot mainly focuses on a few main characters, it’s difficult to keep up with so many new names and faces.

Regarding the game’s mechanics, I’m a big fan of turn-based combat fighting and was initially intrigued by Heroland‘s unique take on this concept. Rather than participating in battles, Lucky stands in the back, offering “assistance” to his party by coming up with battle strategies or offering helpful items. When Lucky isn’t intervening, his party will act on their own. It’s certainly a different take, one that goes along with Heroland‘s entire premise. 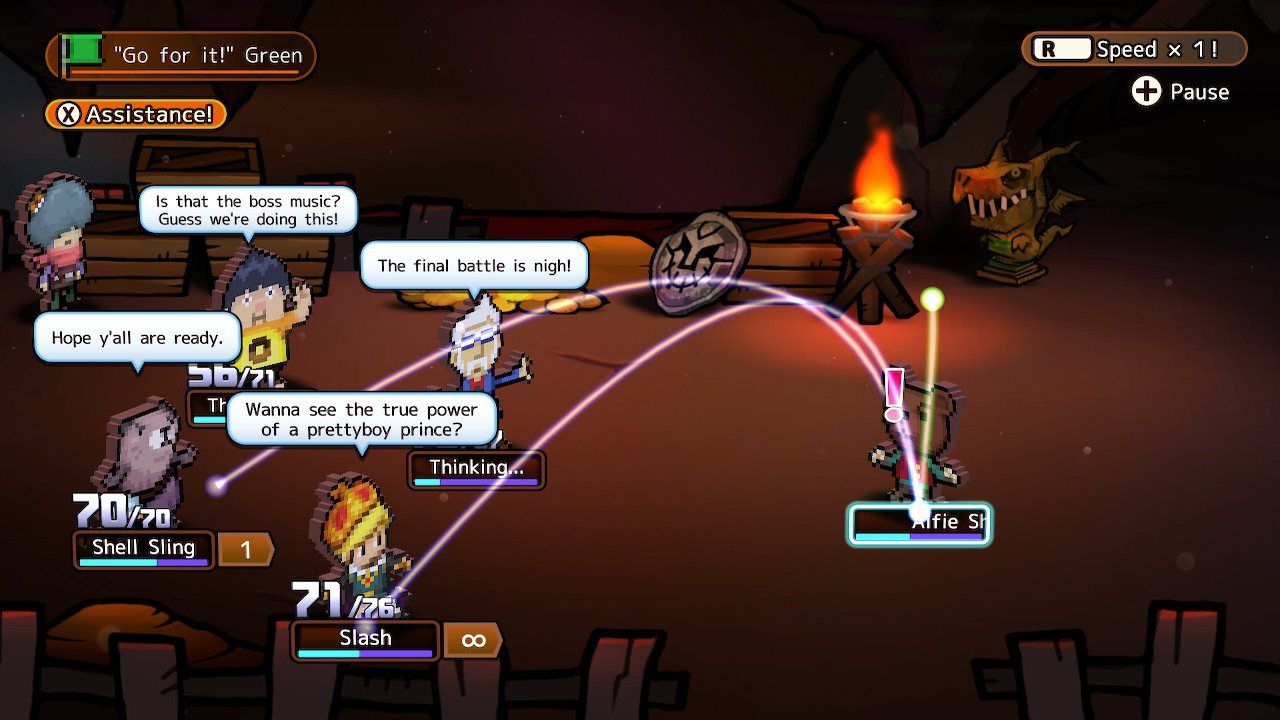 Unfortunately, Lucky can only assist his party after a certain amount of time, so players will find themselves simply watching their screen for long periods of time until they can intervene. Not only that, but early fights are so easy that often there’s no need to assist, resulting in a lot of passive watching with no real impact on the battle.

Despite the fact that players can’t do much when fighting, there’s a good chance they’ll ironically find themselves constantly going on side quests and additional battles to level grind. I found that every time I received a new main story mission, my party’s levels were way lower than the recommended level of the mission. Therefore, I constantly found myself taking on boring and generic side missions where there’s no level of engagement and enemies seemed suspiciously easy, just to return to the main plot. 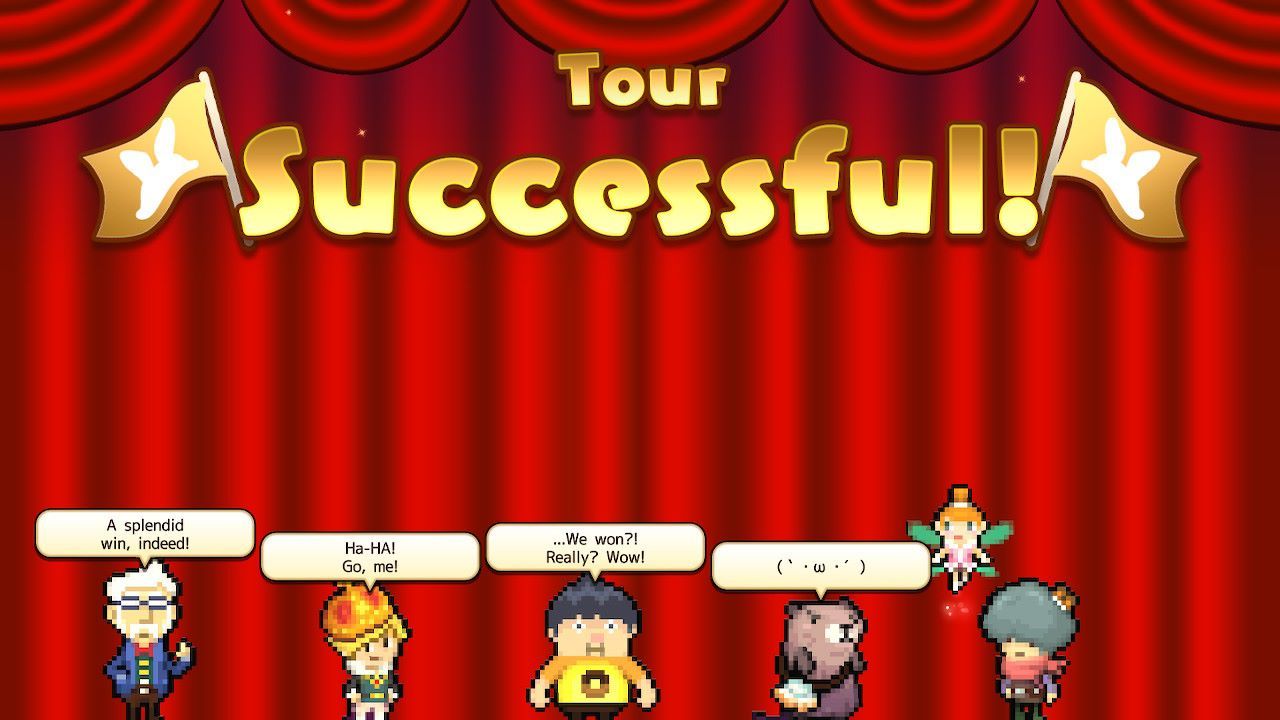 Heroland excels in the visuals department, but unfortunately falls flat in its story delivery and gameplay engagement. It’s the video game equivalent of visiting a theme park just to get cute Instagram pictures, but deciding not to go on any of the boring rides. Which, in today’s day and age, might be someone’s cup of tea. Unfortunately, it’s not mine.