Is The HeroQuest Re-Release A Disaster In The Making?

HeroQuest is coming back! Cue the trumpets! Except there’s something malevolent in the magic being used to revive this tabletop classic…

For those unfamiliar with HeroQuest, it’s a board game that was popular through the late ’80s and early ’90s. Released originally in the UK under a partnership between Milton Bradley and Games Workshop, it introduced a secret world of fantasy roleplay and wargaming to kids the world over. This was not a niche product in the way old-school D&D was, it was a mainstream product appearing in toy shops and on TV. HeroQuest was more than just a game, it was one of the first gateway games into a much wider hobby. This is just one of the reasons people still love the game to this day. So how could its triumphant return go wrong?

Product Rights, My Only Weakness!

Games Workshop and Hasbro Gaming, the successor company to the merged Milton Bradley and Parker Brothers, both lost the rights to the HeroQuest name when they let the trademark expire. What?!? I hear you cry, who would be dumb enough to do that? You have to remember that this was a different time and, by this point, the interest in roleplaying games and wargaming was at its lowest point. In their eyes, there was no value left. The name was picked up by an unrelated company and used for one of its fantasy gaming lines, meaning that it would be a struggle to re-release the game in its original form. 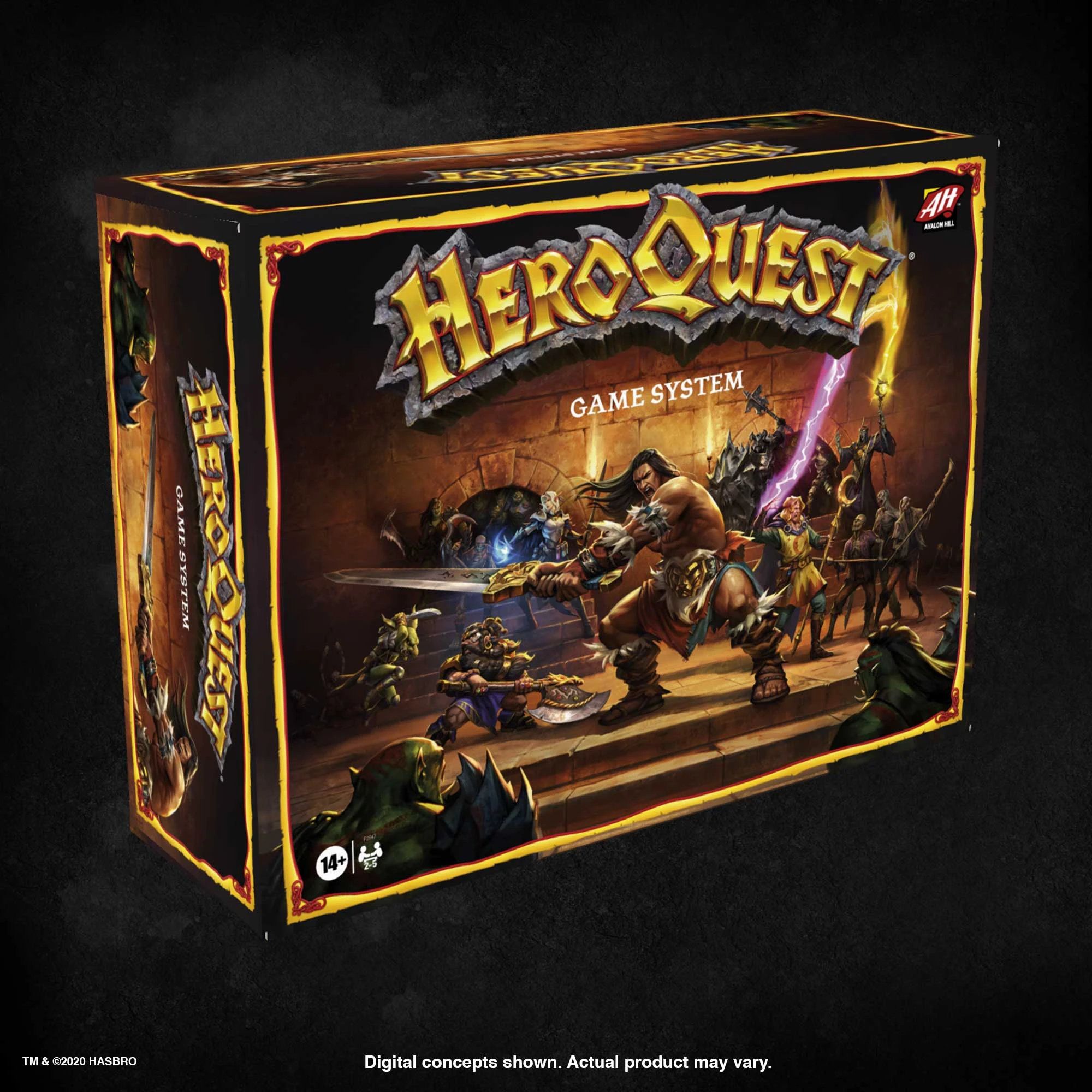 Obviously, all the legal complications have been overcome and the re-release has been announced, but there is no sign of a physical product. Yes, we’ve seen updated artwork and updated digital sculpts. But more importantly, Avalon Hill has used Hasbro Pulse to crowdfund the title. Yes, crowdfund! This has raised a few eyebrows for sure! Avalon Hill is owned by Hasbro, the same company that owns Wizards of the Coast. Some fans out there are questioning why a big company has the need to crowdfund anything. After all, the spirit of crowdfunding is to allow smaller creators a chance to bring niche products to life.

The reality is that Hasbro, like many corporations, prefers to sit on big mounds of cash. It does wonders for stock prices and keeps stakeholders happy. If it can make a product without spending money, it will. And this is what has happened. By using crowdfunding, it’s letting nostalgic fans foot the bill. Let’s be clear – this isn’t just a preorder. This will be for the bulk cost of everything: the tooling, the digital sculpts, designs, and layouts. There is minimal risk to Hasbro. All it has to do is show willingness and some exciting mockups!

Let me take my tinfoil hat off now. I’m not one of these conspiracy theorists – not on this at any rate. Whatever the reasoning behind this, it has had an unwanted side effect. Hasbro Pulse products can only be backed if you have a US or Canadian address, and those with the latter have to pay out as much for shipping as they do for the product. With no confirmation that new HeroQuest receive a retail release, it essentially makes it region locked – a US exclusive! This is a BIG deal. For starters, the originating market has been left in the lurch! That’s the aforementioned UK, the home of Games Workshop. Factor in the EU and Australia as well and you are looking at a large selection of the gaming community that grew up on HeroQuest and would not have found this exciting and diverse hobby without it. Oh, and did I mention that of all the countries that had HeroQuest, the US saw the lowest market penetration? 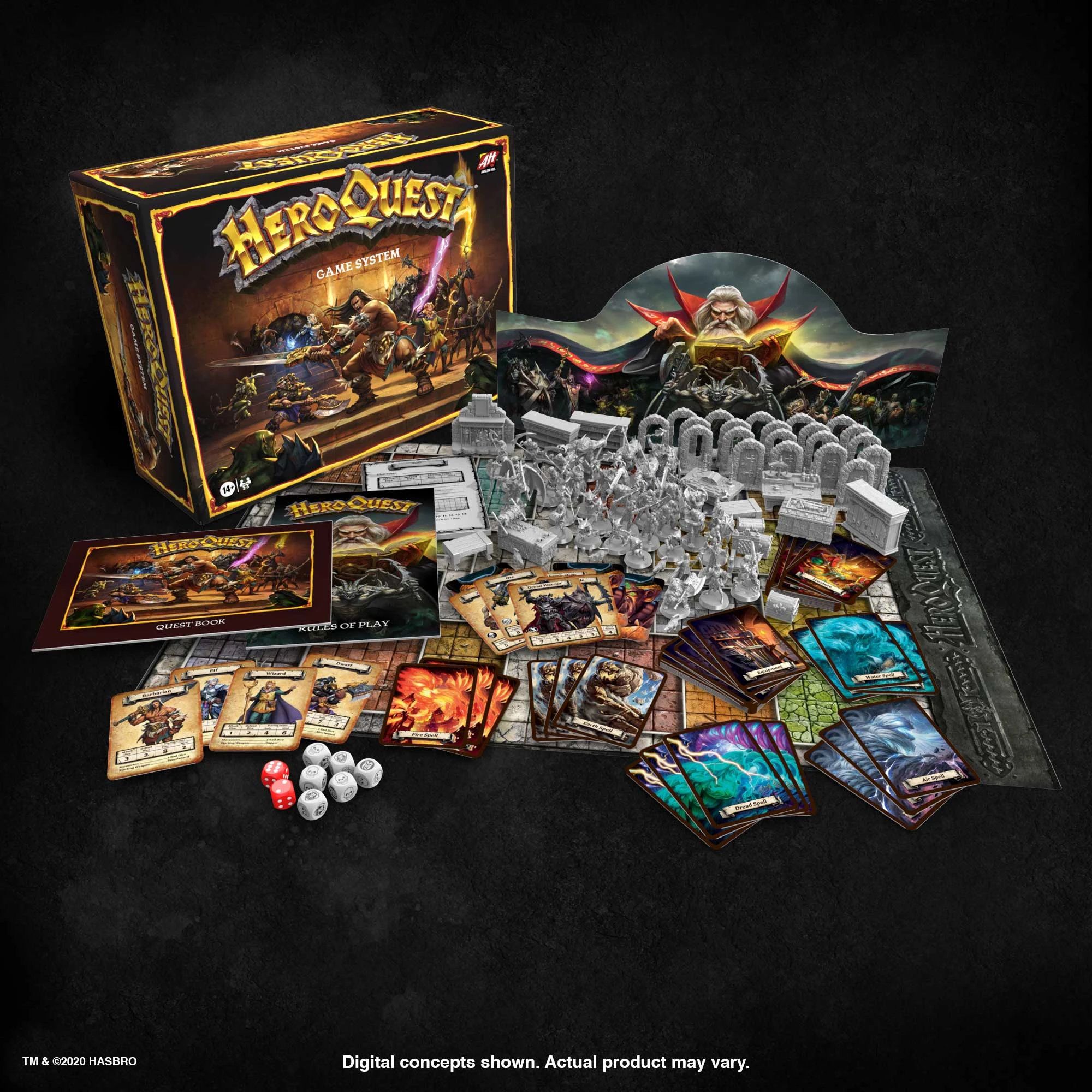 The second oopsie is very much a matter of opinion. The new release of HeroQuest is a re-release. Nothing more. Other than bringing the artwork and sculpts up to date, and a refining/clarification of rules, the box-set is the same as that which released over 25 years ago. There are two levels you can back at, with the lower tier giving you the core game only and the upper tier giving you two additional expansion packs. Like other crowdfunding platforms and campaigns, there is a list of stretch goals but there is virtually no ‘new’ content. As I hinted, the rules are remaining the same, which some folks feel are dated and too simple. This has left many wondering if they should even back this effort in the first place, and even more deciding not to and hating on social media. Personally, HeroQuest is HeroQuest and it makes perfect sense that the re-release would be a carbon copy of the original. I do think new content is needed, but this should be delivered as new expansions. But without any hints of more post-release content, it’s easy to see why so many people are upset.

The HeroQuest crowdfunding campaign still has plenty of time to go and has so far raised over $1.5 million. However, the decision to limit the campaign to effectively the US and a lack of new content has much of the tabletop community in an uproar. My guess is that, had they made better decisions with both aspects, people would be extolling the benefits and showing their excitement rather than complaining. The $1 million target would also have been beaten in hours, if not minutes, and the currently raised funds would be far in excess of what they are now. The biggest stain on this beloved re-release, however, is region-locking it to the US. To think, if they had just funded it internally and delivered to stores with a good ad campaign, all this could have been avoided. Shame on you, Avalon Hill and Hasbro, shame on you!