MechWarrior 5: Mercenaries is a broken game saved by a single button

The arcade-style simulation game is about flinging yourself into battle inside a building-sized walking tank. You and up to three allies — which comprise a “lance” in the series’ vernacular — are bristling with exotic weapons, and only by working together can you take down the dozens of enemies aligned against you in each mission. The game can be played in third-person mode to get a better sense of your surroundings, but you can also get right inside the cockpit by playing in the first-person view.

There’s a lot to keep track of inside your ’Mech, and a lot of buttons that control the various systems. There are buttons for lasers, buttons for missiles, buttons to issue orders to your lance, and buttons to move your ’Mech. There’s even a button to make sure that your legs are lined up with your torso, which forces you to look in the same direction in which you’re moving. This makes it easier to avoid accidentally falling off a cliff, or into a lava flow in the heat of battle.

But my favorite button in the game is a very taboo button indeed. It’s the restart button.

A roguelike at a different scale

Thematically, MechWarrior 5 is structured as a roguelike. While it’s not quite as twitchy as Spelunky or capricious as FTL: Faster Than Light, you’re meant to make a run at the whole story, carrying over both losses and wins from each battle. Having to rebuild your lance after a mission goes bad is part of the drama, and having your entire career ended by bankruptcy if you don’t manage your resources well across multiple missions is a feature of the game. Failure isn’t the end; it’s just another wrinkle in your campaign.

It’s not a design that should lend itself to a “restart” button. In fact, that button kind of flies in the face of what games of this nature do well, which is build stakes. Why worry about a battle if you can start from the beginning of that skirmish at any time?

But MechWarrior 5 would be unplayable without the restart button. That’s because MechWarrior 5 is a little broken. Or maybe a lot broken, depending on who you ask in the community. And that’s fine, or at least not an instant deal-breaker, because I can always restart a mission if it all goes to hell.

And it almost always goes to hell, because all the other computer-controlled pilots on the battlefield are idiots.

I’ve watched the AI drive a Commando with abandon, loping across a battlefield only to stomp directly through the warehouse full of women and children they were sent there to protect. I’ve seen Cicadas that rattle around inside their fortifications, tearing their own bases to shreds trying to get out and into the fray. Some of these ’Mechs have jump jets, of course, but not one of them has thought to actually use them. These 30-ton war machines can literally fly, but not a single one of them has ever lifted off on my watch. It’s remarkable.

My allies aren’t much better at this, unfortunately. I can give them simple commands — move, stay, hold your fire — but they don’t always listen. I sometimes tell them to climb to the top of the nearest hill, to fire their long-range weaponry while I get in close to handle my business with the enemy units. They invariably stray from that position, often bumping into me as I line up a shot.

During a game last week, my long-range missile boat beat me to the target in a footrace, then stepped right in front of me as I pulled the trigger on my Gauss rifle. They died instantly.

So I hit the restart button.

Why keep trying at all, when so much goes wrong, so often? Why hit the restart button instead of uninstalling the game? Because MechWarrior 5 does one thing well, in general, but it’s a very important thing: It’s a game that understands how MechWarrior as a property is fueled by personality, and it brings these monstrous machines to life remarkably well. 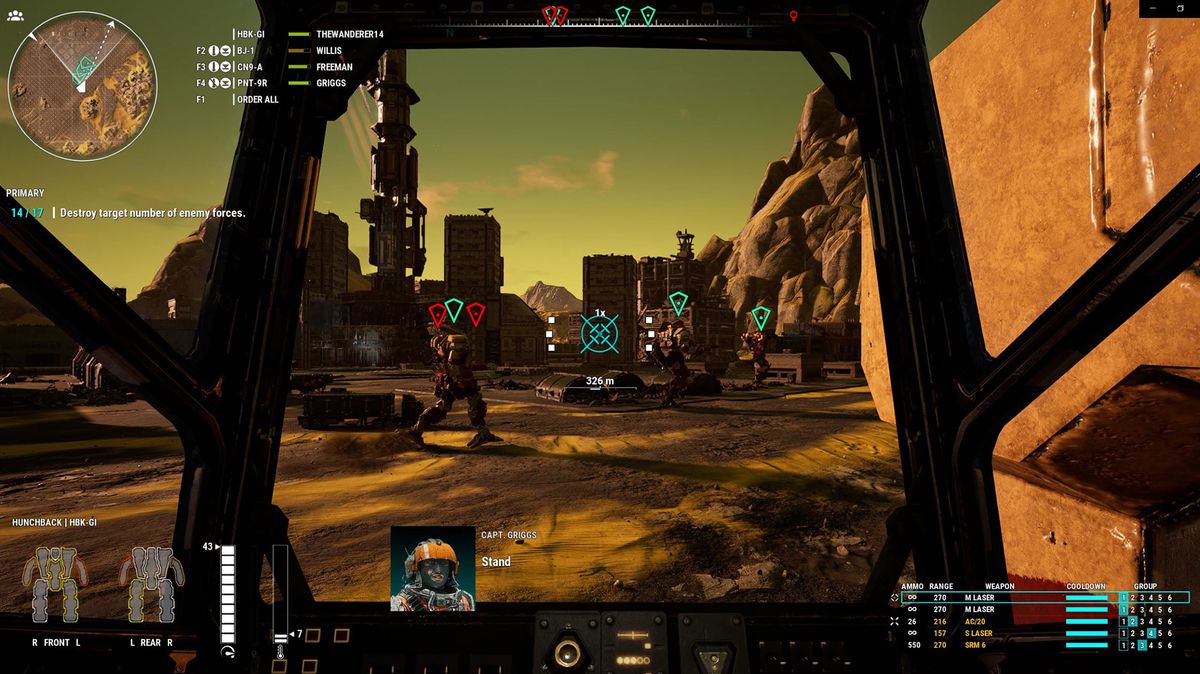 Why can’t I see the enemies on my minimap? And why are all of my lancemates walking in front of me before I fire? Who knows?
Image: Piranha Games via Polygon

The MechWarrior universe, and the BattleTech universe that came before it, is about the bond between man and machine.

“I wanted to treat the machines in the way a World War II tank or aircraft was treated,” BattleTech co-creator Jordan Weisman told me in 2017. “That we talk to them and that we name them because our lives depend on them. We are the ones who are imbuing that personality into them, though, because it makes us feel better.”

The team at Piranha Games absolutely nailed that aspect of the game, from the way the units move to the impact of the weapons that they carry. When I fire ballistic shells, my massive machine jerks to one side. I cause a shower of sparks, and chunks of the enemy ’Mech — sometimes entire limbs — fall off when a shot lands where right I aimed it. ’Mechs will stagger and limp, cowering before my blows. It’s the kind of visual and animated feedback that’s usually only found in the best melee brawlers or competitive fighting games.

The birth of BattleTech

’Mechs in MechWarrior 5 have an awful lot of personality, and I have bonded with the models that I’ve collected in my hangar. The experience is made all the more intimate by my decision to play the game exclusively with a flight stick, throttle, and rudder pedals. Having to physically move more of my body to get things done helps me feel attached to my ’Mech, both figuratively and literally. It’s the most exercise I’ve gotten during the workday since last year’s E3.

The ’Mechs themselves are arguably just as attractive, and just as evocative, as anything that rolled off the assembly lines of the Allied or Axis powers in the 1930s and ’40s. There’s something unmistakable in their profiles and their silhouettes: how the thin, spindly arms of a Panther-class fire support ’Mech cradle its oversized particle projection canon, capable of punching a hole through the thickest of armors; how the beaklike canopy of a Wasp or a Locust speaks to its remarkable speed.

That same attention to detail is plastered all over the insides of the cockpits as well. Sure, they’re not quite as detailed as I’d like them to be — none of the gauges move, and there’s nothing interactive at all about them. But each cockpit is unique. As I cruise toward the next waypoint on the map, I can look all around at the interior of the space, scarred and dented by centuries of use. They’ve got character, and that’s what I’m looking for in a MechWarrior game.

So when the allied AI misbehaves or when the enemy AI sort of stops working at all, I hit the restart button and begin a mission once again. The experience is so uneven, and so often broken, that the reset button is the only way forward. It’s the one feature that makes the rest of the glitches and inconsistencies tolerable. 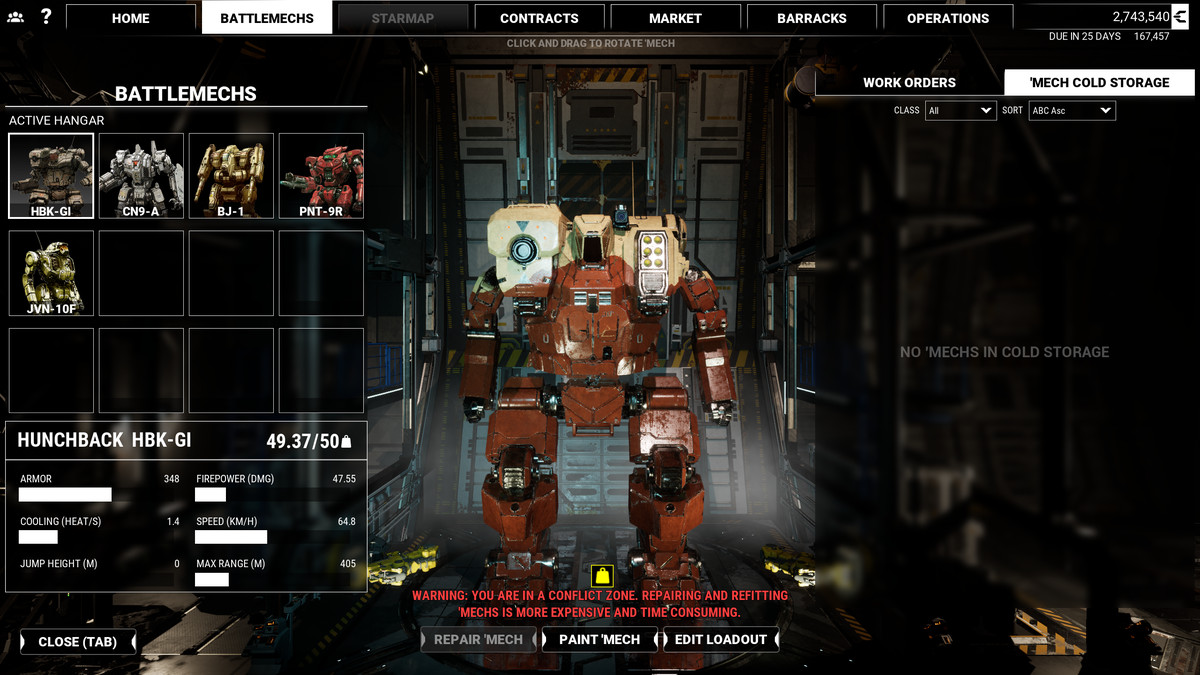 This is my hero Hunchback, Wally. I carefully paint his camouflage before every mission to match the landscape. If he loses his Gauss rifle — the only one I’ve been able to find so far — I will absolutely restart that mission. The randomness of MechWarrior 5’s loot system means that I might not find one in my sector of space for some time.
Image: Piranha Games via Polygon

The trouble is my in-game progression: All these restarts have slowed my progress in the narrative campaign. More than 30 hours in, I still don’t have any assault-class ’Mechs at all. I should be closing in on MechWarrior 5’s conclusion by now, but I’m barely into the midgame. I keep playing the same segments over and over and over and over, hoping that this time the game will work long enough for me to move ahead, without the AI sabotaging my efforts.

MechWarrior 5 has turned into a kind of ride for me, rather than a coherent video game. And the ride itself is still an awful lot of fun.

I feel an immense amount of pleasure in launching a tungsten slug at hypersonic speeds a full kilometer across the battlefield, punching a hole in the enemy ’Mech’s cockpit, and watching it tumble forward in a smoking heap. There’s something to be said for shooting other big stompy robots right in the face; seeing the sides of a building slough off like molting skin; watching the trees ignite in towering flames from the impact of my lasers; and all the other joys that come from a well-conceived take on this world.

But those moments are also competing with an equal number of times something in the game breaks, or when an AI failure forces me to restart yet again. The highs are pretty high, but the lows are just as low. It’s a good thing the core experience is so enjoyable, because actual campaign progress often feels nearly impossible.

MechWarrior 5 is impressive when it’s able to work long enough to live up to its own potential. Until it’s patched enough for that to happen consistently, however, I’ll remain grateful for that forbidden restart button, and I refuse to feel bad for hitting it, no matter how many times it takes.

I look forward to the time when I’m able to leave it behind.

MechWarrior 5: Mercenaries is now available for Windows PC. The game was reviewed using a download code provided by Piranha Games. You can find additional information about Polygon’s ethics policy here.

With all its games looking the same, Ubisoft shakes up its editorial team

Everspace 2 Continues To Shape Up, Showing Promise At PAX South