One nagging question invades my mind as I play Nioh 2, the third-person, brutally difficult action role-playing game from Team Ninja: Why do I do this to myself?

I hold the R1 button down, tap the triangle button on my PlayStation 4 controller, and my Nioh 2 weapon transforms from a blade on a pole into a sickle so large and ornate that the Grim Reaper would blush. This is the Seething Dragon switchglaive in its most powerful (and slowest) form. I’ve gone full scythe because I’m getting desperate.

I may be a half-human, half-yokai demon ninja, a force for good cleansing Sengoku-era Japan from a supernatural outbreak of evil creatures, but I feel like I need all of the power I can muster if I’m ever going to defeat the specific monstrosity that’s currently standing in my way.

But the sickle isn’t enough. I’m too excited, too aggressive, too myopic in my approach, obsessed with ruthless aggression. And while I’m watching my twirling blade, hoping for a killing blow, I’m forgetting to watch the monster. I don’t hear its howl, and I miss the red-and-black-and-gray smoke that envelops its twirling body, the telltale signs of its deadliest attack.

My distraction and confidence prove to be my weakness, which is how I find myself wrapped like a meal for a boa constrictor by this 20-foot-long abomination. It’s choking the breath out of me while also draining my life, one peck and squeeze at a time. It spears me, and flings me across the arena like I’m the gross one here.

I die, and my first reaction is to call horseshit. But that’s pure emotion, entitlement born of unadulterated frustration. It’s the classic reaction of a fool, which means I’m handling this whole situation wrong.

I’m frustrated, and I’m pissed off at myself. I’ve been stuck in this dance, with this particularly deadly eyesore, since yesterday. And I’m still walking into its trap, still failing to kill the damn thing.

So, again, why the hell do I do this to myself? That question is my last thought as I respawn and try again. This is when it hits me: I’m playing a puzzle game. 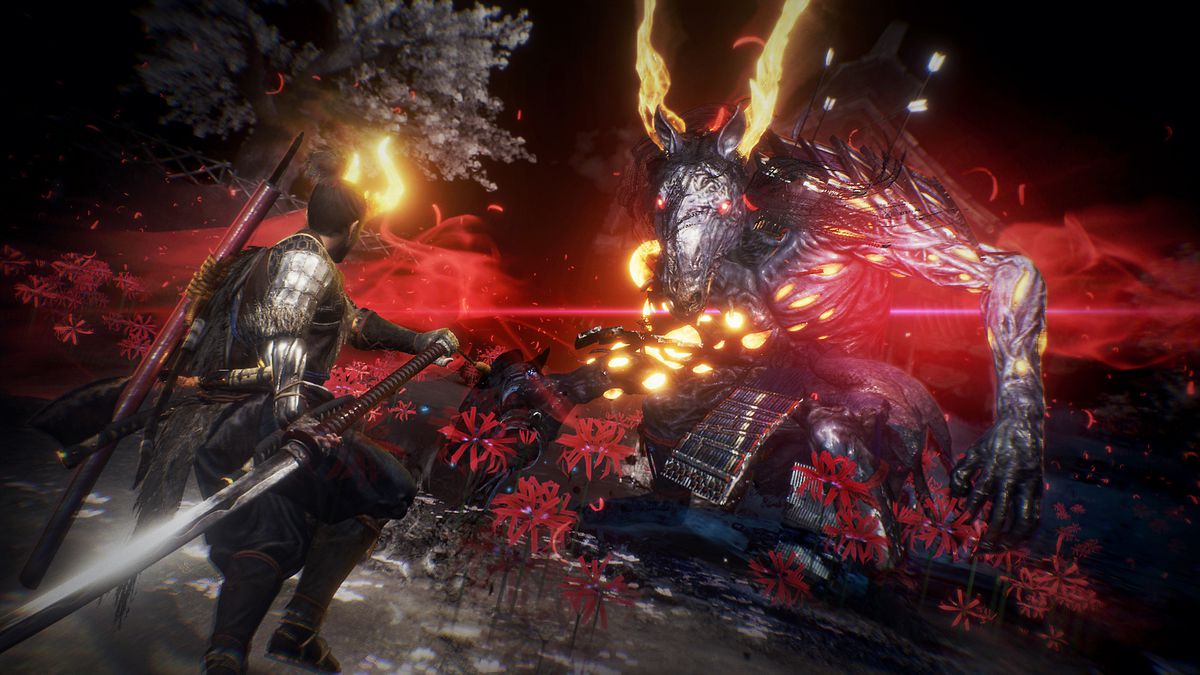 Team Ninja has been handing me my ass for the better part of two decades, a relationship that began when I discovered the beautiful and maddening Ninja Gaiden in 2004. The studio’s best work lives at this intersection of frustration and pleasure. Nioh 2 delivers the tight controls and relentless action of the first Nioh, and previous games in the Ninja Gaiden series (the strange impulses that lead to, say, Dead or Alive Xtreme Beach Volleyball, excepted).

But I’m not here just for the difficulty, and honestly I’m not the biggest fan of games that seem to be hard for the sake of being difficult. There has to be a point to the struggle, which is what Nioh 2 excels at. I play games like Nioh 2 and Sekiro: Shadows Die Twice as if they were puzzle games, not action titles. Each boss encounter just requires that I figure out how my own strengths work against whatever weaknesses I can find in the enemy. After that? It’s just a matter of execution.

Nioh 2 is Ninja Gaiden mixed with Dark Souls and Sekiro and drowned in an ocean of complexity. Every enemy is a threat, if I’m anything less than deliberate. I don’t feel skilled when I succeed. I feel smart. And I guess I like feeling smart. That’s the feeling I’m chasing every time I take another whack at a challenging enemy. I don’t care about getting good. I much prefer to feel as though I’m getting wise.

As long as I’m thinking clearly, I know that death isn’t a failure — it’s a way to gain more information about what I should be doing. And the knowledge that the inevitable death of each encounter respawns me back at a shrine means I feel safe trying, and experimenting with new things. I attack, I get defeated, I learn, I repeat. I find something comforting about the idea that progress is tied to being present with the game, learning from each failed repetition, but doing a little better each time. There’s a lesson there, of course, but that’s a side effect of the game’s design. What I’m really chasing is the rush of finally staying focused enough to move ahead and see something new. And I get there inch by inch.

If you’ll allow me another metaphor, it feels like a recipe I’m creating as I go. Each battle becomes a series of simple, logical, and repeatable steps — once I work out what I need to do. And then conquering Nioh 2 becomes a matter of execution. Can I do what I need to do perfectly, without missing a beat? If incremental improvement makes me feel good, mastery is almost a high. And Nioh 2 demands mastery. 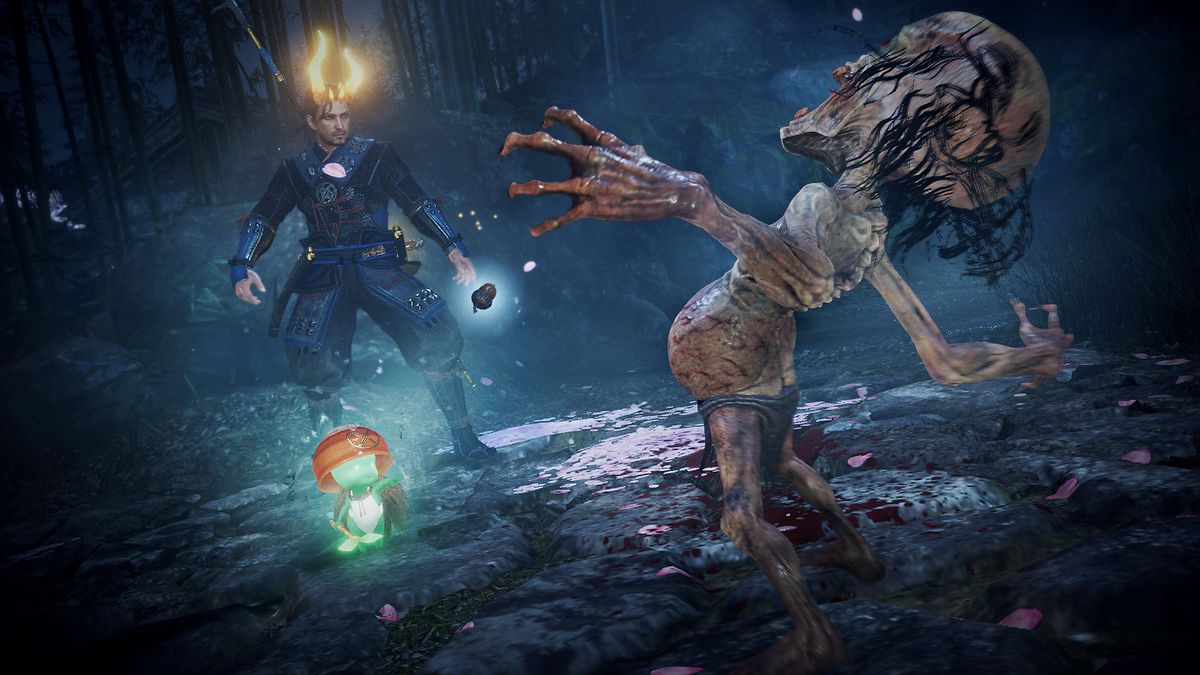 What doesn’t feel great is the immense amount of complexity in Nioh 2.

I spend my first 10 hours barely surviving and mostly focusing on what’s obvious to me — swinging my weapon at the enemies. But the more I play, the more options I have available in combat. There is magic, there are accessories like shuriken, there are an absurd number of weapon and armor drops that arc out from everything I kill. It’s not a series of systems that lock together. It’s a pile of ideas I have to sort through, and constantly think about, in a way that feels deceptively like distraction rather than an addition.

Complaining about potentially helpful drops and upgrades feels weird, but the pacing of these systems is overwhelming. Every moment is already a struggle for survival, and trying to remember everything that’s available to use in combat or what arcane finger contortions I’ll need to work on to bring it all together sometimes seems impossible. And that’s the rub: The things I’m not thinking about might be the things that could save my life. Nioh 2’s various item and upgrade systems are just too overwhelming to keep everything in my head at once, a problem I don’t often have with other games in this genre.

It’s as if Team Ninja never said no to an idea they liked. They just added ALL OF THE IDEAS to the game.

It takes time. A lot of time. After 40 hours, systems that once felt alien shift from unintelligible to instinctual, even if they never quite feel natural. It’s a subtle distinction, but an important one. I want to fight monsters, but even after all this time I too often feel like I’m fighting the game itself.

I’m having more fun now that it’s all clicking, but that initial commitment is staggering. Fighting is less deliberate and more instinctual — but only after a few dozen hours. I once had to think, “Oh! Red attack! Hold down R2! Hover over Circle! Wait! Wait! Now!” to beat a particular enemy, but now it’s just a thing I do.

Once I reach that point, in fact, my brain is free to pepper in all the things I was missing before, all the options I couldn’t remember in the thick of battle, and that changes things. I should have been using magic much earlier, and learning how to do it well makes me feel unstoppable … for about five minutes, until I realize there’s something else I should have remembered, and a small enemy rips me apart. Nioh 2 shifts from difficult to punishing, mostly because of the sheer amount of things it asks you to mentally keep straight as you play.

I don’t think a game has ever asked as much from me as Nioh 2. Yet still I return, because if a game is going to be this demanding, it had better be fair, and Nioh 2 is always fair, even if it often feels like just a little too much. It’s a puzzle game. It’s baking bread. It’s everything that yields rewards only after you learn to think differently, and learn consistency and focus. And I’m getting better at it. I’m getting wise.

Nioh 2 will be released on PlayStation 4 on March 13. The game was reviewed using a download code provided by Sony Interactive Entertainment. You can find additional information about Polygon’s ethics policy here.