“Super Mario Bros., but make it a battle royale.”

Look, I’ll level with you – this sounds like a Hard Drive headline. Nintendo’s elevator pitch for their latest FTP experiment comes across as an atypically cynical move from the publisher, but it’s an undeniably curious one. How does that work? Do 99 Marios drop into an island, then stalk and murder each other with a diverse menagerie of killing implements? I’d be here for that, honestly.

Alas, that’s not the case. Instead, Super Mario 35 (out now) takes a page from last year’s brilliant Tetris 99. Players are thrown onto into a lobby of 35 other players at the outset of each match, then prompted to play through 1985’s Super Mario Bros. like normal. But when every player starts tromping through 1-1, you’ll discover that more than a few things are askew.

As you play, every choice you make has consequences. Killing a enemy? That’s a few extra seconds on your timer – and a new ghost your opponents have to contend with. Picking up extra items? That’s fifteen seconds on your timer. Collect 20 coins? You’ve got shiny, new mystery box to open, which offer a variety of items and helpful buffs like Fire Flowers and POW! blocks. Every small action you take for granted in this well-worn game suddenly has a new weight to it, and can spell the difference between life and death. 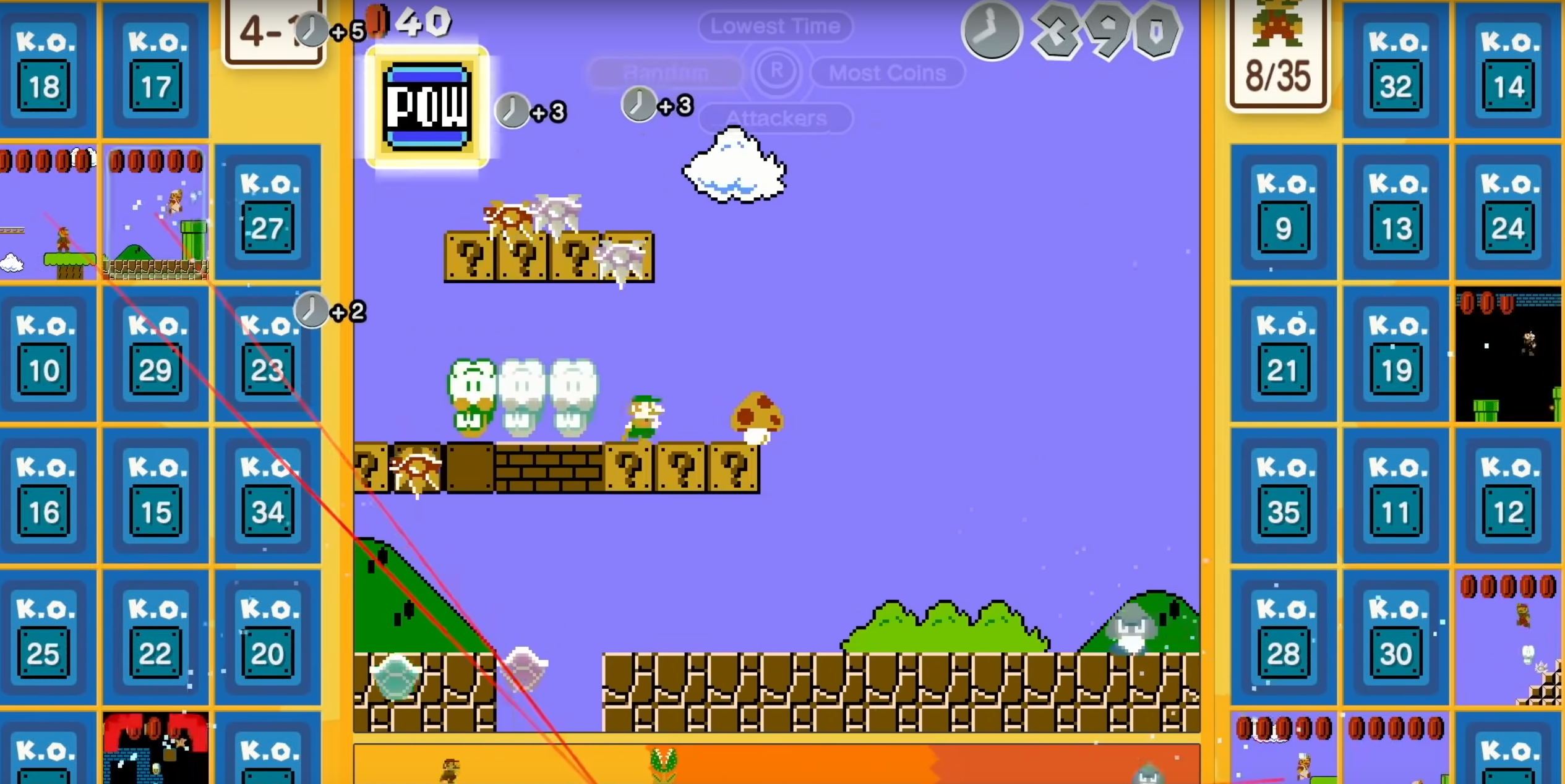 Much like Tetris 99, every player has their own separate board to work with. Attacking another player means making their game more irritating by flooding it with enemies – enemies that can truly screw somebody over with the right timing. For example, if you have a few seconds, you can corral enemies between two blocks and target a player about to take a leap. You can then kill all the enemies en masse, ensuring that your victim won’t finish that leap, and will instead fall into the unforgiving abyss below.

That dynamic naturally results in some hilarious scenarios. Dozens of Goombas flooding your screen. A Paratroopa swerving at you while you’re fighting Bowser. Bowser himself appearing in the first level. It’s a total nightmare, but in a good way. For people like me, who’ve played this game into the ground for their whole lives, it’s a fresh way to experience a bonafied classic.

So, in my book, this whole enterprise is a cool idea – competitive Mario where your success means others’ failure. It’s an interesting way to recontexualize a game that once represented whimsical freedom and exploration to a whole generation of players. While I have issues with the slow, ambiguous progression of unlocking levels, the fact remains that the core gameplay loop was enough to keep me coming back for more during my extended play session last night.

I’ll definitely keep coming back to this before March, when Nintendo plans to yank the game from their service for some byzantine and frankly nonsense reason.