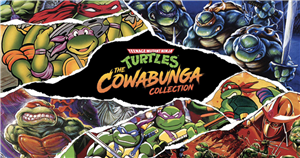 The collection of classic Ninja Turtles games contains 13 titles for your £40.

That’s a lot of gaming for the money, albeit retro hits you may well have played before.

The menu system is simple and allows to you sift through the games on offer to quickly delve into late 80s, early 90s classics all featuring those famous heroes in a half-shell.

So what’s in the package?

Well there’s two coin-operated arcade originals when the Turtles were at the height of their popularity in the 90s.

The latter are faithfully recreated in black and white with a square Game Boy sized screen on your Nintendo Switch.

Barring two Tournament Fighters titles, most other games are side scrolling Streets of Rage style brawlers.

So while it’s great to see how the franchise develops over the console generations, the style of gameplay is limited.

I absolutely loved the arcade games back in the 90s and they didn’t let me down here.

Leonardo, Donatello, Raphael, and Michelangelo looked colourful and brought back all those retro memories as I plunged into the action on the Nintendo handheld.

Death is quicker and attacks seem more brutal from the enemy generally.

So don’t step in to The Cowabunga Collection expecting an easy ride, there are tough video games in this collection that’ll test even the most hardened players.

But at least the developers have adding in a few quality-of-life features including save anytime and rewind, button mapping, and added online play for certain games with local couch play for all titles where originally intended.

There’s also never-before-seen development art, sketches and game design compiled in a ‘museum’ allowing you to delve deeper into the turtle heroes’ back story.

Konami has done a good job putting together a lot of nostalgia for the price.

This is a must-buy for any Ninja Turtles fans looking for a retro gaming kick to add to their collection.

Those less interested in a 90s cartoon classic may find the collection a little too samey.