I’m a weirdo in that I love Paizo’s Pathfinder and Starfinder tabletop RPGs, but have never actually gotten to play a campaign in either. My group is all about D&D, and convincing people to learn different rules systems can be a tough sell. But still, I consume Paizo’s releases, both for their stylish art direction and fun mechanics. The latest book, Starfinder Galaxy Exploration Manual, is another example of how Paizo keeps its content friendly to all TTRPG players.

Starfinder Galaxy Exploration Manual might sound boring in name, but it offers an exciting amount of new options for players and GMs alike. I can’t speak to the player options since I’m not a player, but it looks like all of the Starfinder classes see some love here. That’s especially impressive to me as a D&D player, as most 5E books tend to focus in on two or three classes for new gameplay features. So it’s nice to see every Starfinder class get a boost to their exploration and roleplay capabilities. Players also get extra feats based on the environment they hail from.

The part of the book that resonates with me most is the Infinite Worlds chapter. It’s there where Game Masters are given tips on building their own planet for their Starfinder party to explore. Guides are given for establishing the biome and culture of a planet, as well as how these things specifically affect the players’ ability to travel, fight, or attempt diplomacy. Reading it as a D&D Dungeon Master, it gets my wheels turning for my fantasy campaign. 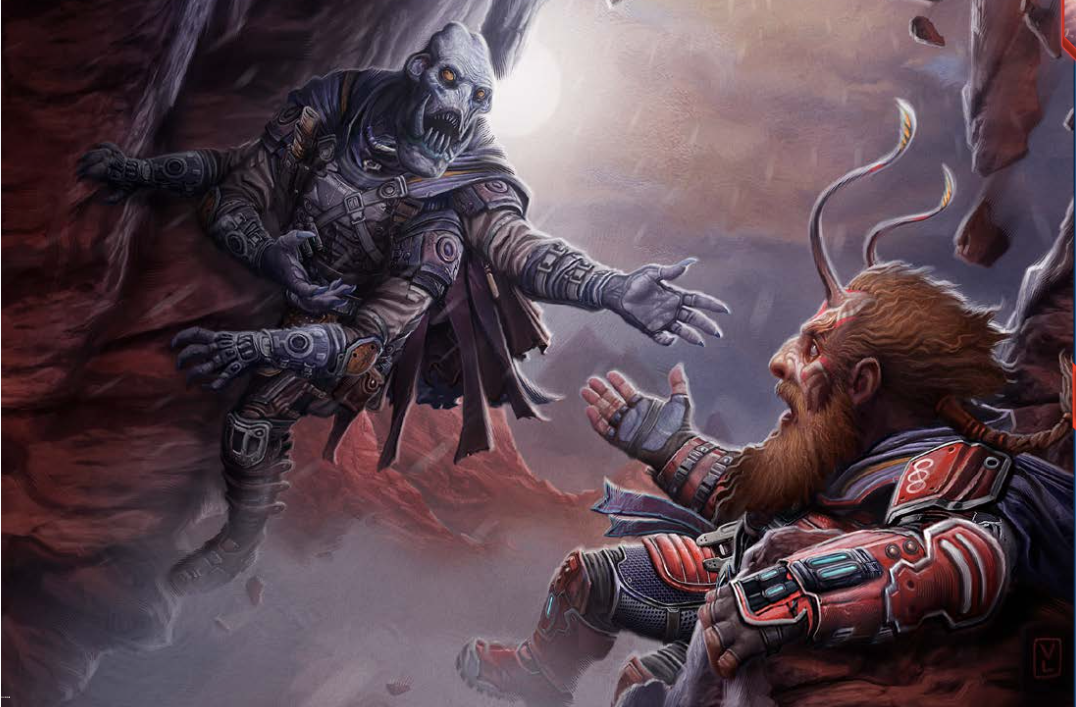 It doesn’t take too much tweaking to take the ideas presented in the Starfinder Galaxy Exploration Manual and make them work in any RPG. For instance, the book lists mountain as a possible biome. The descriptions refer to mining operations and ghost towns, as well as the kinds of creatures that are suited to the terrain. That’s easy to transfer over to a fantasy setting, and already gives me ideas for adventures involving a haunted mine.

The best part is the selection of rollable tables, something I always love to see in a GM book. Again, I get ideas I can use for my D&D campaign. Take this prompt from the mountain biome:

“A haunting call from a dangerous mountain peak has led travelers to their death since the end of the Gap, inspiring local folklore. The same mountain also harbors a rare herb that is key to cutting-edge bioweapon research.”

Take out “The Gap” and bioweapon, and you have the beginnings of an adventure that can work in any genre. Perhaps the herb is needed for a life-saving potion, or instead, it’s ore for the party’s new magic weapon. That haunting call could be ghosts from that haunted mine, or something more monstrous.

Overall I’m getting more out of the Starfinder Galaxy Exploration Manual than I thought I would. I imagine it will be an even better value once I actually get to play the game.