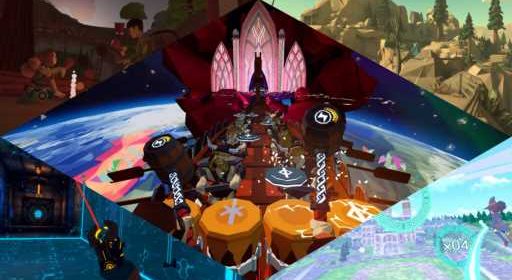 Welcome to VRFocus’ regular Friday roundup of the virtual reality (VR) videogames set to launch over the next week. Here are five new titles for those who love puzzle games, sports games, open-world adventures and more. If you’re after some freebies then definitely check out the VRFocus free VR game selection.

Gravitational is a physics-based puzzle videogame set in a future where gravity can be manipulated. You play Sebastian, a scientist at GraviCorp, one of many companies developing gravitational travel and control systems. After an incident, you have to solve the various puzzles on route with all your locomotion being entirely wheelchair-based. The digital launch is on the 13th whilst the physical retail version will arrive on 16th July.

Originally an Oculus Quest title, Walkabout Mini Golf is now heading to PC VR headsets. There are seven 18-hole courses to try and master, from snowy, rocky peaks to beautiful, cherry blossom-filled valley’s, with an unlockable Night Mode to ramp up the difficulty. It supports both solo and online PvP multiplayer with cross-platform gameplay.

Making its way from PC onto Oculus Quest (no cross-platform support), A Township Tale is an expansive co-op adventure designed for up to eight friends to team up on one virtual server and go on quests. Everyone has to choose a profession (blacksmith, woodcutter, miner, archer or warrior) to aid the group and make use of the crafting materials found exploring the dangerous landscape to build new equipment and improve their gear.

Love rhythm action videogames but wish more had a rock/metal vibe to them? Enter Ragnarock, a PC VR title that launched late in 2020 and is set to leave Early Access next week. Providing both solo and PvP multiplayer modes where the former allows you to race against your ghost, the soundtrack features the likes of Alestorm, Gloryhammer or Wind Rose.