Like most Dungeon Masters, I began running Dungeons & Dragons games with nothing more than a notebook full of ideas, a vague understanding of the rules, and a dry erase mat. That mat was gridded, of course, and with enough imagination it became the stage upon which my party’s adventures played out. One day it was a forest clearing with a scribbled river running through. Two weeks later it was a bandit keep with little squares marking the outhouses the players blew up (don’t ask). Unfortunately, the mat and my crude drawings only did so much. It wasn’t long before my players just saw the grid as a grid.

While D&D is a game of imagination, playing it repeatedly can wear one’s suspension of disbelief down. Character sheets become less of a story and more a set of numbers. Combat becomes a thing to end efficiently rather than a nail-biting narrative climax. Eventually, no matter how lovely a picture the DM draws on a dry erase grid, the players automatically go into tactical mode and focus on the squares. WizKids’ new WarLock tiles attempt to bring a sense of immersion back to dungeon delving with high-quality set pieces. The presentation delivers on that front, just don’t expect to build the labyrinth to end all labyrinths.

Straight from the WarLock product page, here’s what you get when you purchase the Dungeon Tiles 1 pack: 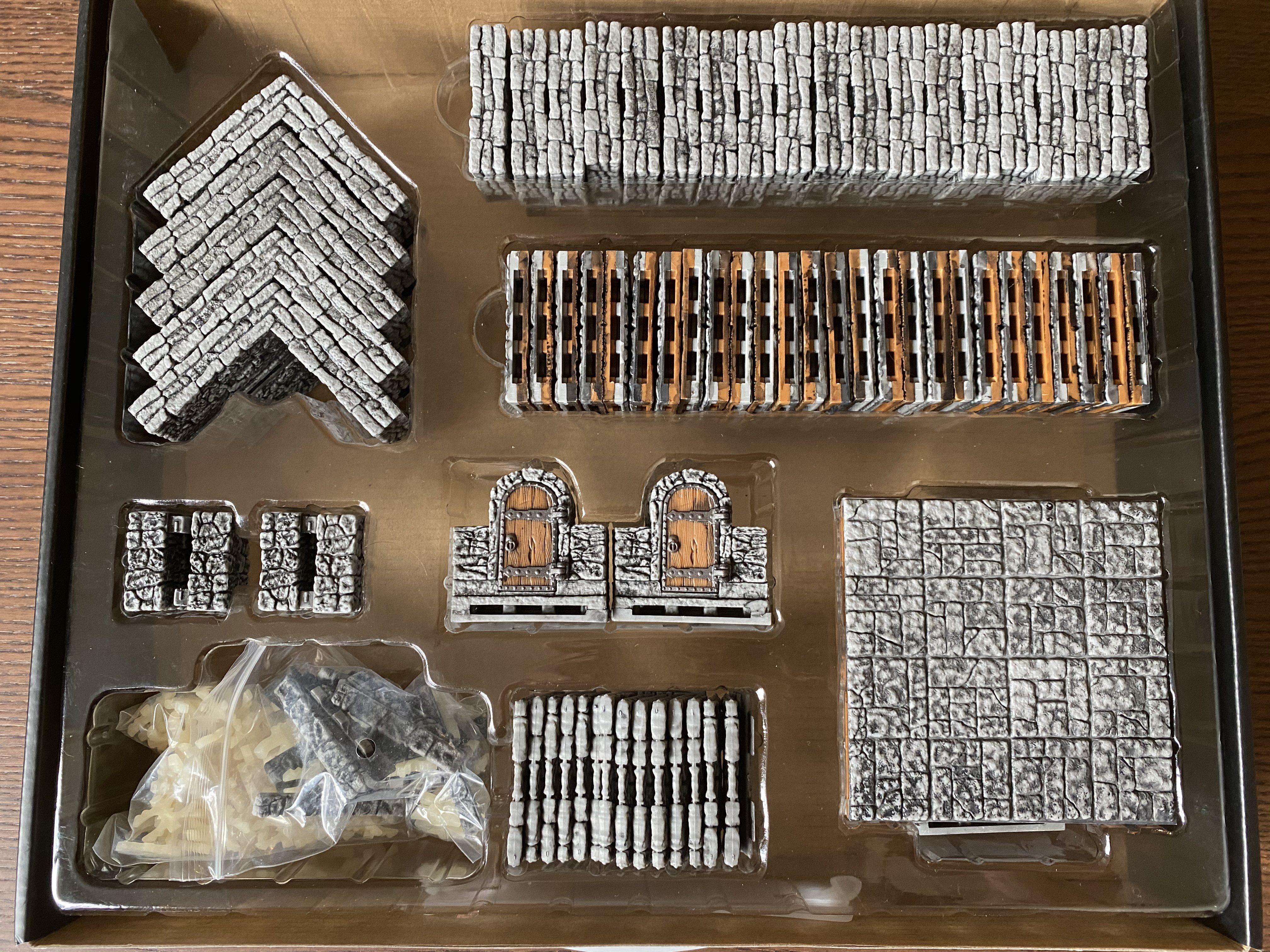 As you can see, the core goal is to provide a straightforward floor-and-door structure. You also have the option to line what you create with one-inch walls – WizKids claims this height makes it easier to reach into a structure and move figures around during gameplay. Also included are several doors that actually open, and some thin walls that can be slipped in between tiles. These are used to create smaller rooms within your final structure. The last pieces of note are the clips which hold it all together. I’ll do a little sidebar on those later, as there’s a slight technical hiccup there.

It’s hard to firmly rate a product like this as it’s mostly up to the user’s imagination. The first creation many buyers will probably think of is a castle or fortress of some kind. For my initial build, I tried such a simple square building. Then I added some minis from the recent Icewind Dale set to make a scenario. The party of adventurers just hunted down a rogue warlock who stole a precious magical crystal. But when the villain is cornered, he commands his monsters to attack our heroes. 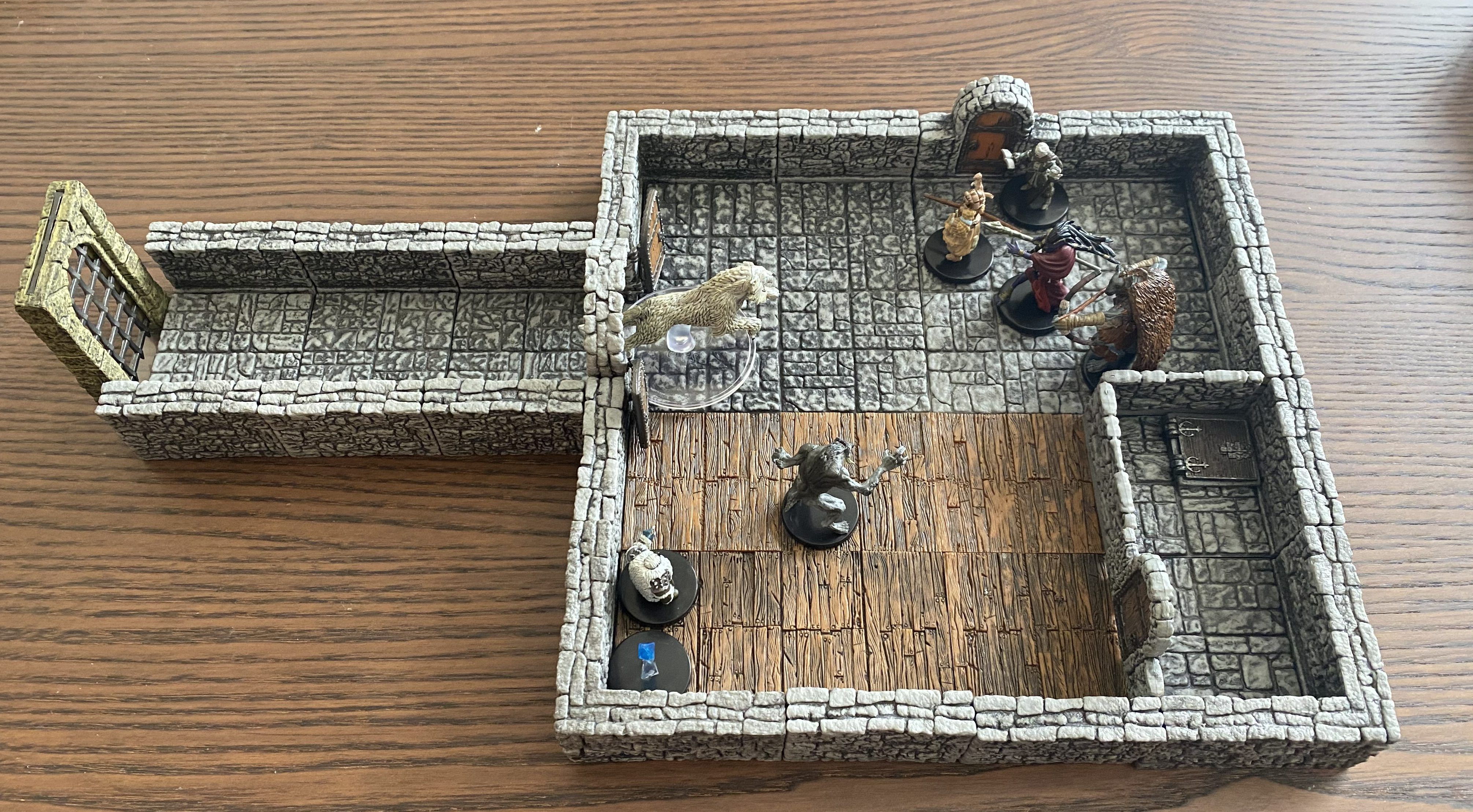 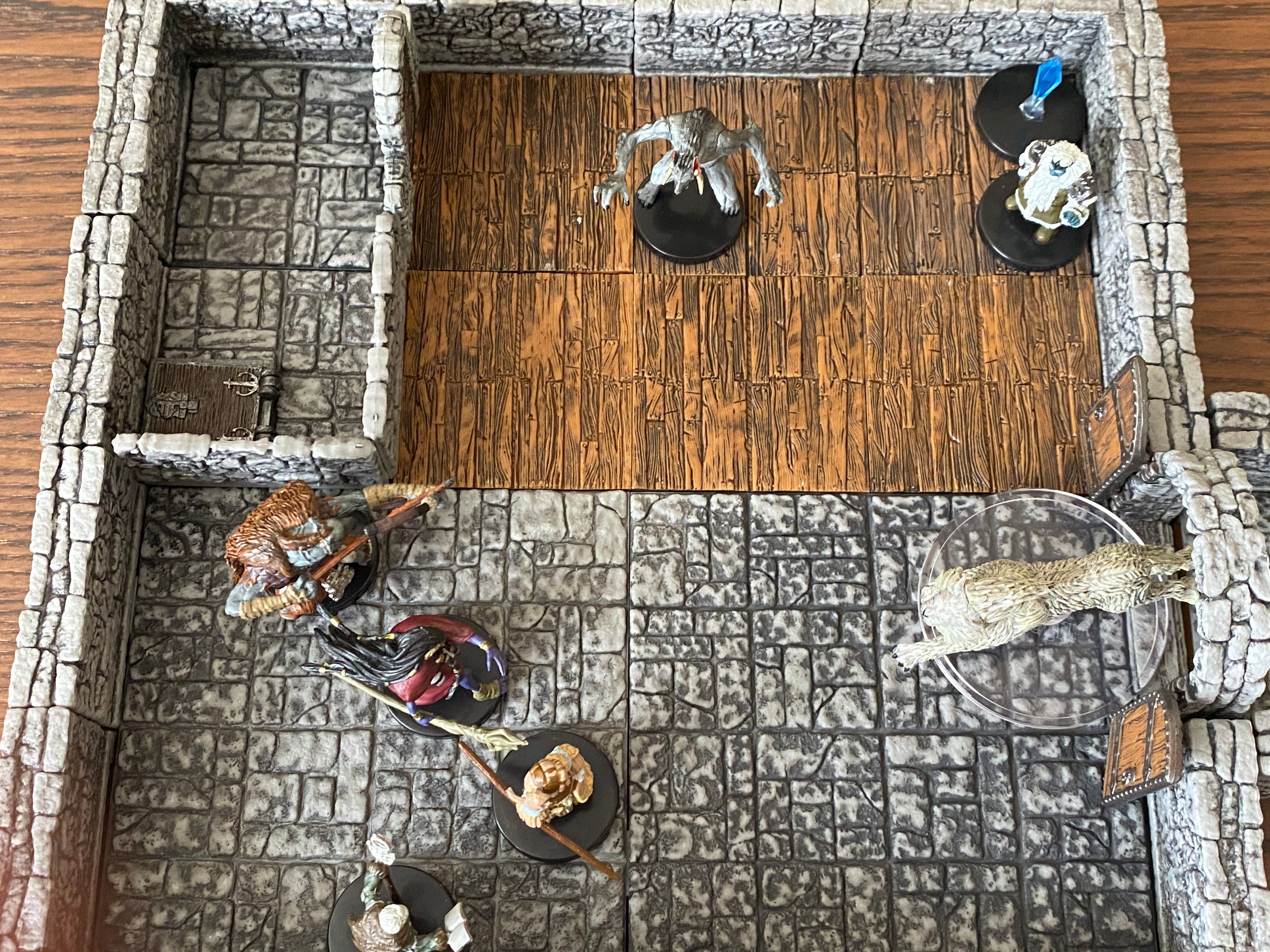 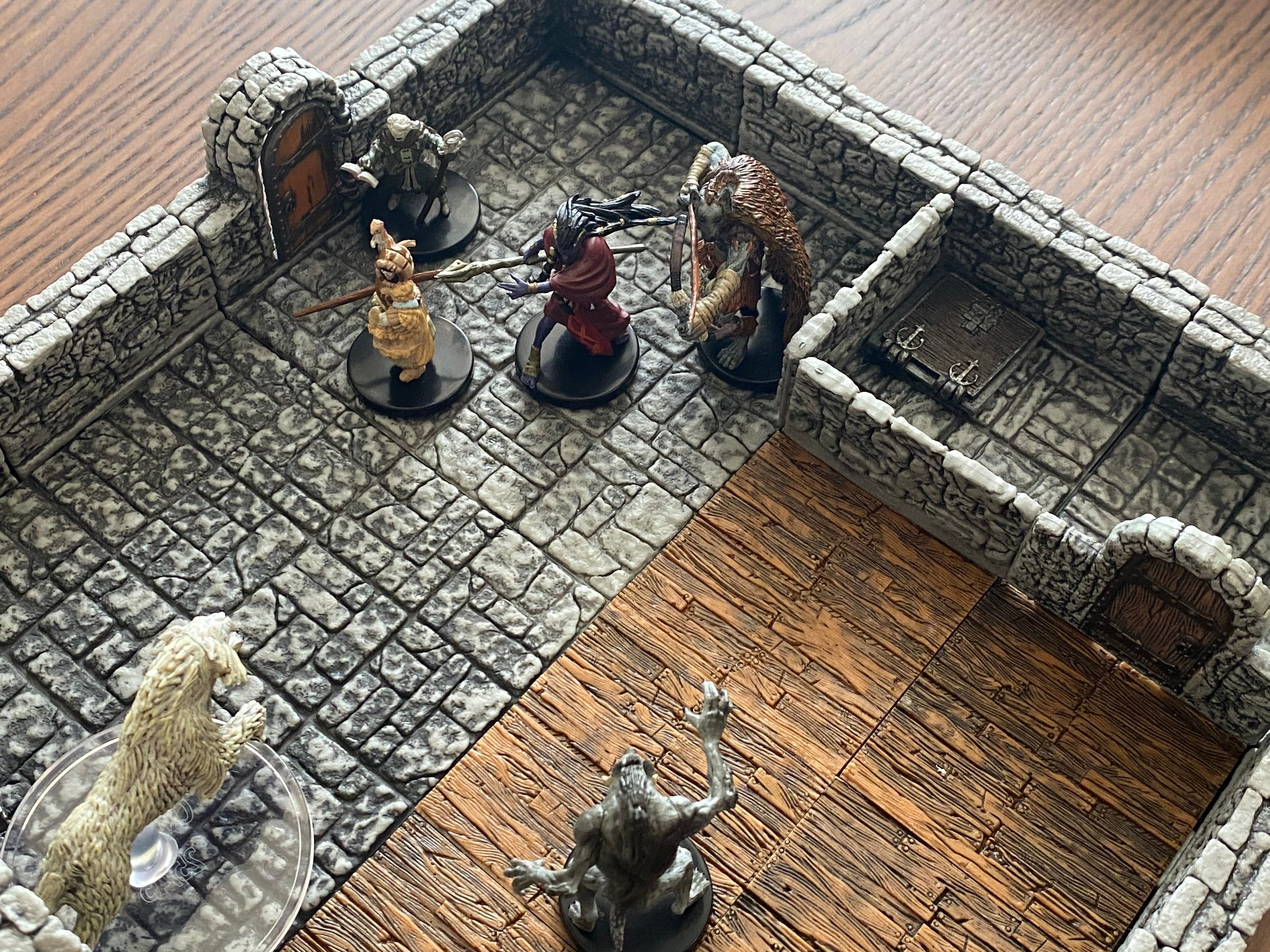 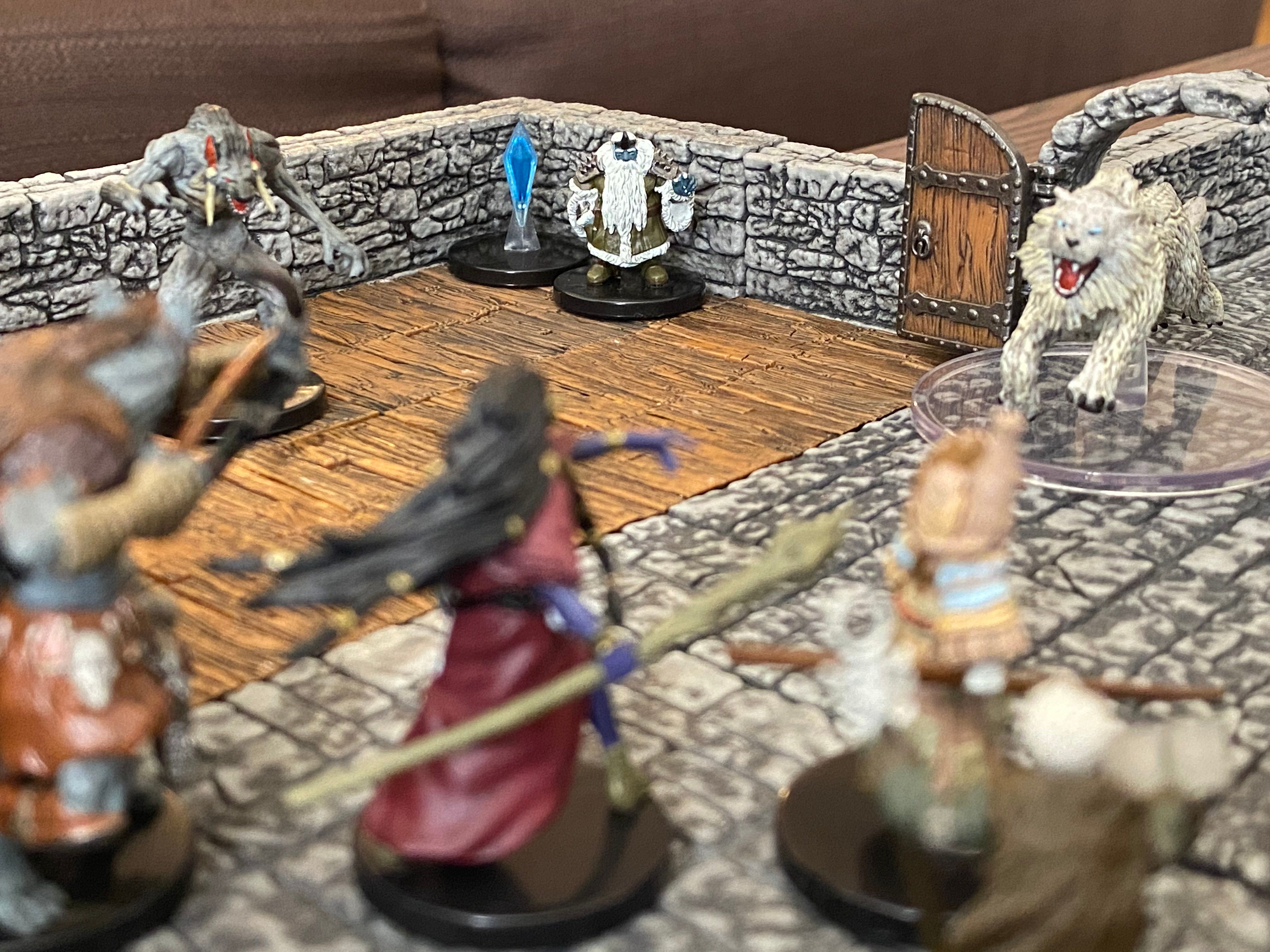 This setup inspired me to add a little side room with a trap door (the trap door is part of a separate set of themed doors). I imagine the warlock will try to run to this room and escape through the hatch. I also added the hallway on the side that leads to a barred gate. This is where I think the warlock kept his “pets.” Maybe the adventurers will want to explore that area after the battle, or head down the hatch. Either way, a dungeon is born. How much you get out of WarLock tiles depends on how much imagination you put into them.

Of course, the grandest ambitions in the world will fall flat without the tools to realize them. So how do WarLock tiles come together? 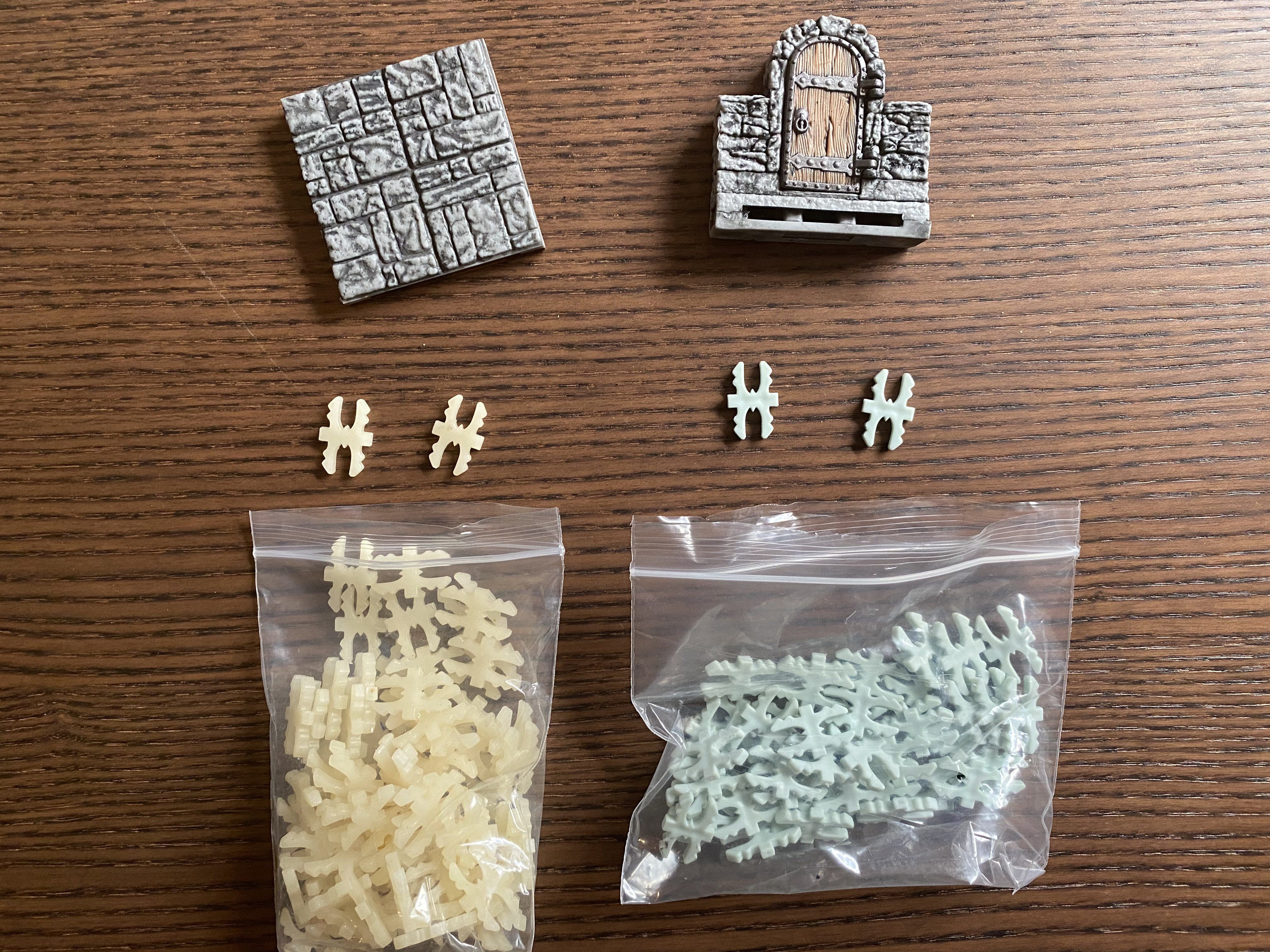 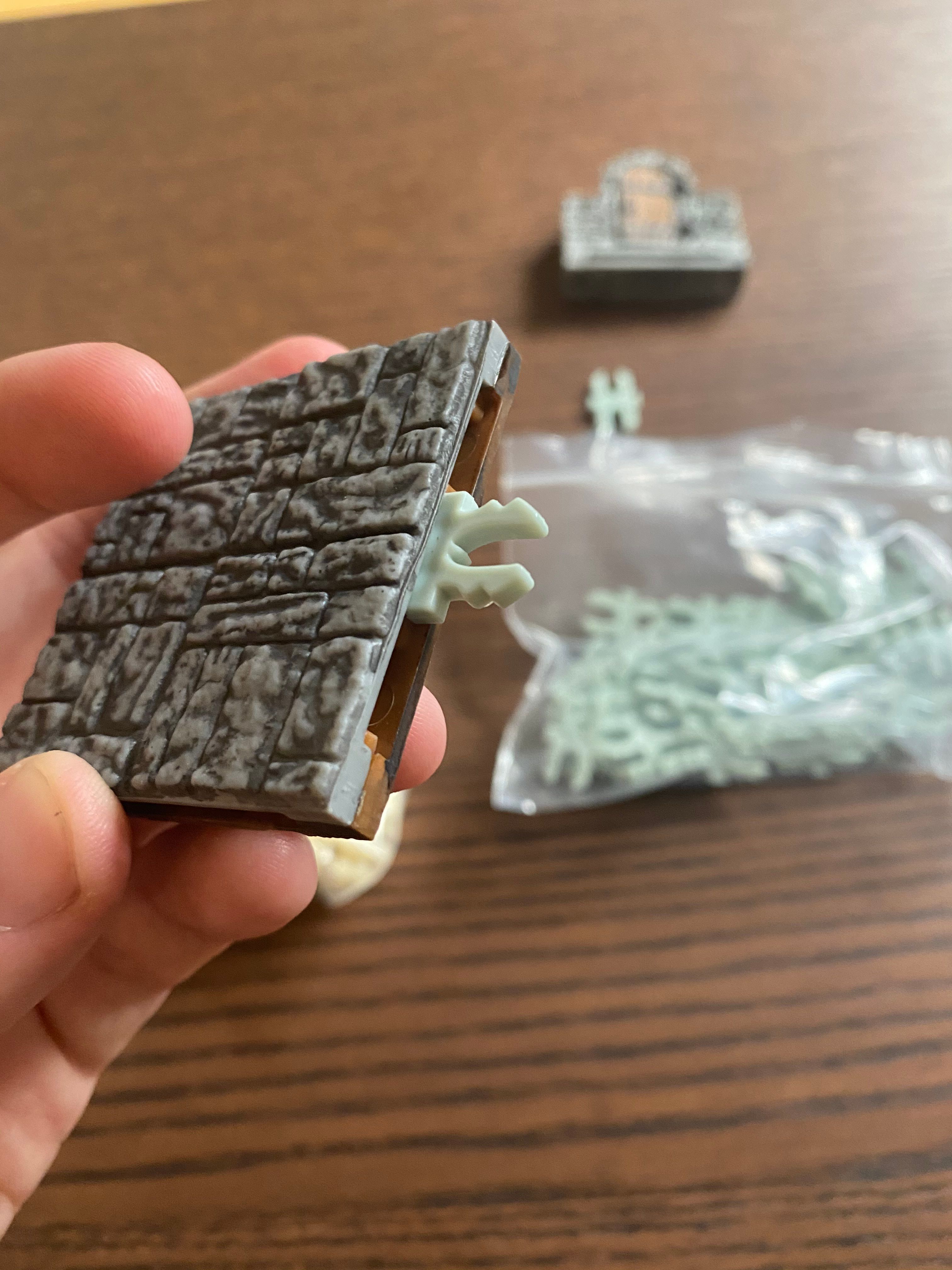 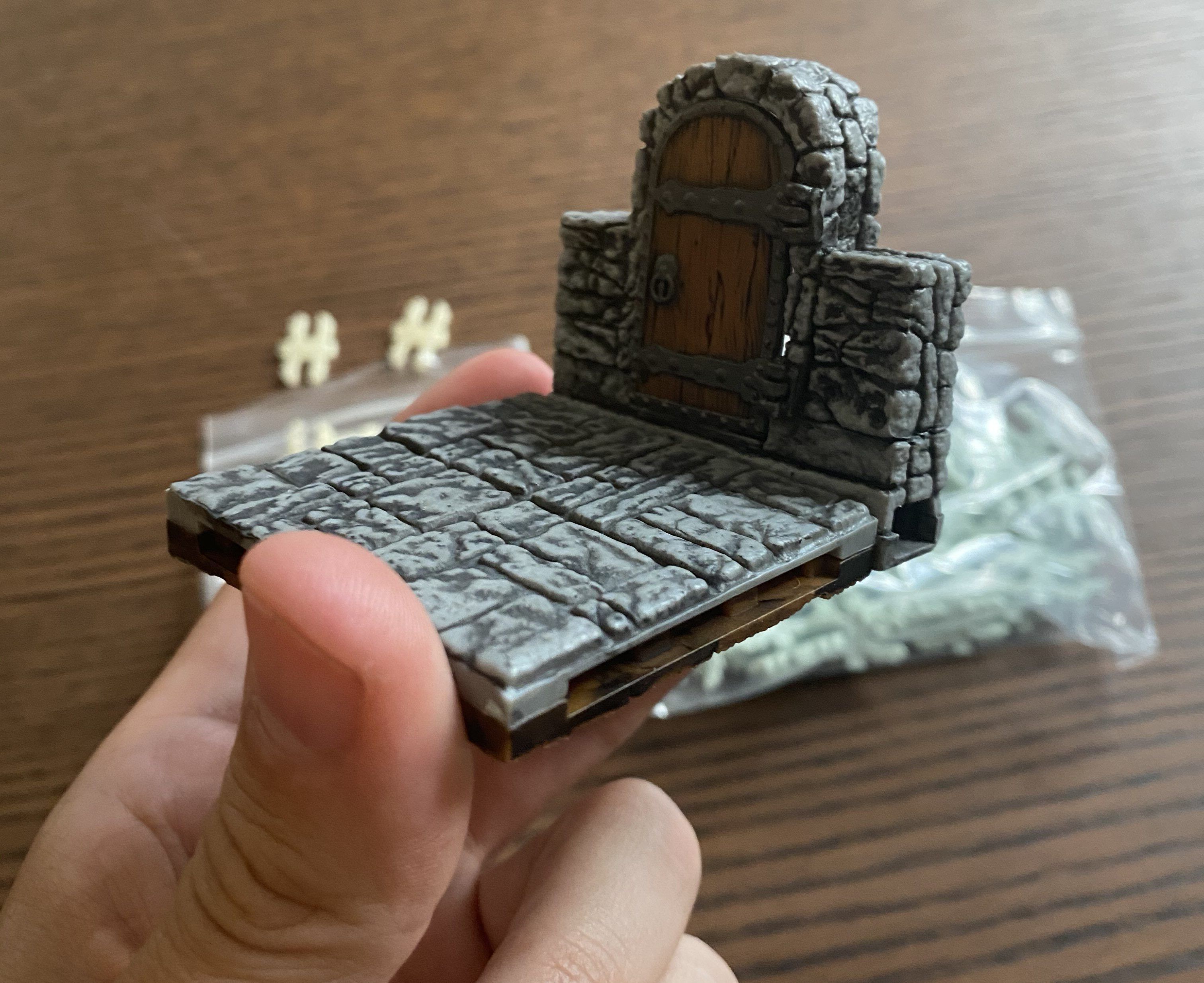 For the most part, it’s as easy as the pictures show. Just snap a clip into a tile, then snap that tile to whatever piece you want to connect it to. Keep doing that until you have the structure you desire. Walls have adjustable ends so you can create more maze-like structures. If sturdiness is a concern, each piece supports at least three slots so you can stack clips for more hold. The set comes with a bag full of clips so you should never fear running out. The major issue I ran into is the stubbornness of the clips.

WizKids said that a strong hold was priority in the design of the clips. It wanted users to be able to put together a build and feel confident in carrying it to game night. However, this came with the side effect of the little buggers being way too hard to push in or pull out. When I first linked two tiles, I worried that I was going to damage them with how hard I had to push to get the clip in. Pulling out was also very tedious and straining on my fingers when done repeatedly.

The best solution to this are EZ Clips. The newer, grayer clips were designed to be installed and removed much faster, and they work. Unfortunately, they are not included in the Dungeon Tiles 1 pack. They must be purchased separately at $4.99 for 100 EZ Clips. The price is a no-brainer for all the hassle it will save you, but I still feel like WizKids should be working to include them in future WarLock sets.

Aside from the clips, everything else is easy-to-use and flexible in a way that creates a lot of value. My favorite element is the double-sided tiles that allow you to create stone or wooden floors. Just with that, you can conjure up a dank dungeon or the comforts of a tavern. Again, use my earlier build as an example. Within seconds of having the thought, I was able to add that secret trap door room. The power to quickly morph along with the user’s ideas is a huge strength of the WarLock system.

Immersion But Not Scale 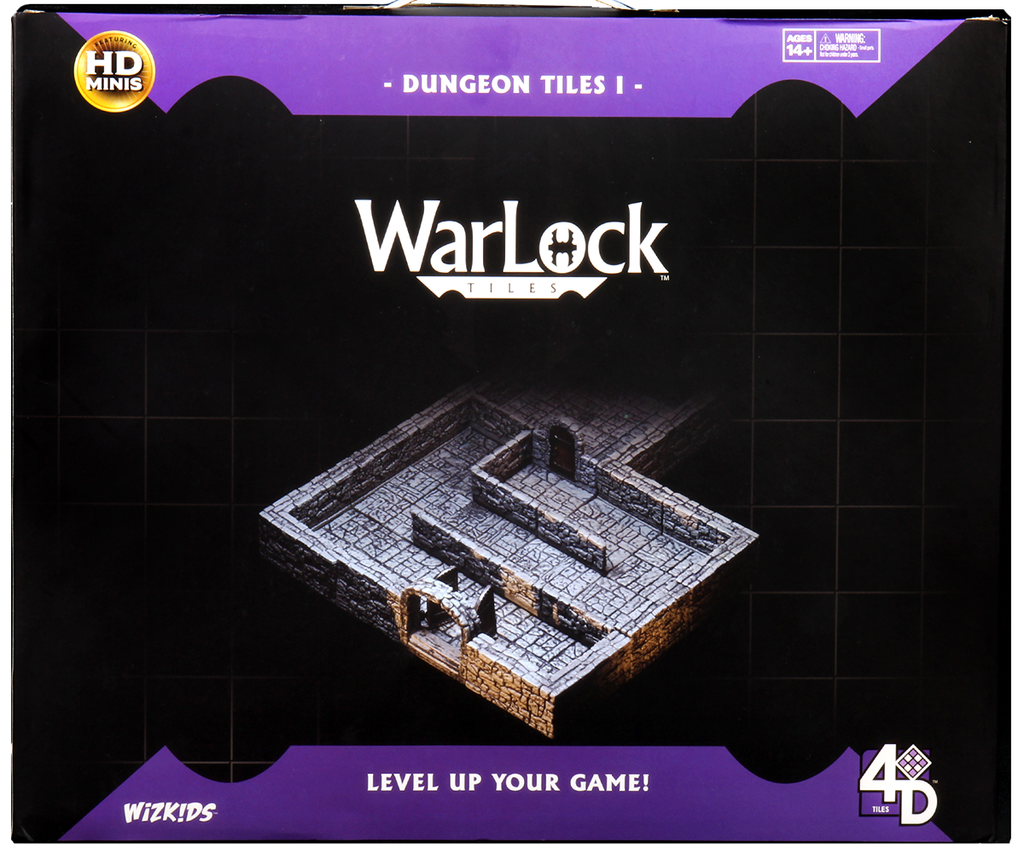 For what it offers in utility, WarLock meets it with visual quality. The paint and design come together to establish a stark difference between textures. Even on a single tile, the “wooden planks” and “stonework” feel different. Doors actually open and close (although only in one direction). Best of all, the tiles are separated into the same one inch squares as grid mats. This allows D&D players to move around and do battle in the way they’re used to. However, the WarLock tiles have slight visual imbalances, like askew stones or long planks. This puts the product firmly in between allowing streamlined gameplay and keeping immersion intact.

That said, one WarLock set only allows you to build so much. The 30 floor tiles are mostly broken up into 2″ x 2″ squares. So even using everything, you’re looking at one big boss room with maybe a few wall inserts for barricades. If you want to make a maze-like dungeon, you’ll have to keep it modest. There aren’t enough pieces in one WarLock set to make a multi-tiered dungeon of doom. You could take floors apart and build new ones as the party goes, but that’s up to your speed and their patience.

For $99.99, WarLock tiles offer a lot of value. The tiles and clips seem like they’ll stand up to repeated use (although one door did break when I opened it too far…) and offer myriad options to those who love to create. When your party starts tackling higher level dungeons, however, you may find yourself needing to buy more sets just to have enough pieces to work with. There’s already a set for “town and village” pieces, stairs and ladders, and the collection of doors that gave me that convenient trap hatch and prison bars.

Chances are, if you’re considering purchasing the WarLock Dungeon Pack 1, you’re a DM who is invested in the hobby. Like me, you want to upgrade from that beat-up dry erase mat. WarLock actually makes for a great starter set, as the price is relatively low compared to other 3D dungeon products. The environments are also generic enough to act as locations for D&D, Pathfinder, and other systems. If you see yourself creating dungeons for years to come and want to wow your players, I’d recommend WarLock. Just be sure to throw the EZ Clips in your cart as well.

WizKids provided TheGamer with a Dungeon Tiles 1 set and the Doors & Archways set for this coverage.