XCOM: Chimera Squad Review: Less At Stake, But You Can Control A Snake

When it comes to the XCOM games, XCOM: Chimera Squad has the lowest stakes imaginable in the history of the series. Usually, the fate of the entire world rests on your shoulders as you train a brigade of soldiers to fight an alien army while trying to protect each individual continent. Here, you’re trying to find the culprit behind a political assassination. And it’s not even a senator or a governor, it’s a city mayor. Compared to saving Europe or Africa from total annihilation, this is a cakewalk.

This is an interesting experiment from Firaxis. It attempts to add more story and character to XCOM while also trying to condense it into a much more compact package. XCOM: Chimera Squad still provides the player with a rich, strategic campaign, although it feels shorter and less involved than previous titles. 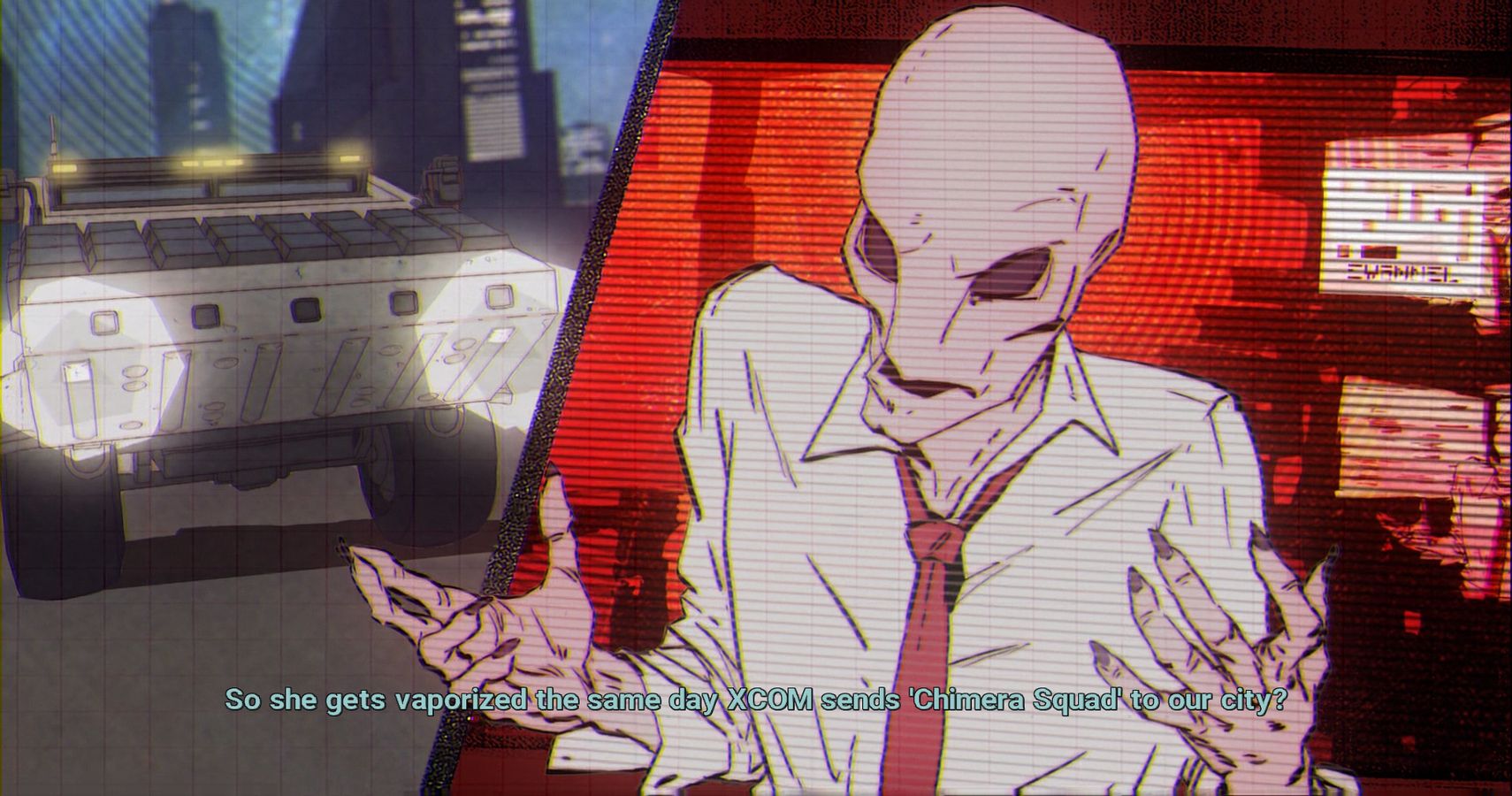 XCOM: Chimera Squad takes place five years after the end of the war with the alien overlords. After they fled, the leftover aliens and alien-human hybrids are no longer mind-controlled slaves and have now been integrated into human society to create a new world order. You’re in charge of an elite special forces unit called the Chimera Squad, a regiment made up of humans, hybrids, and aliens. They’re brought in to resolve a situation involving an alien mayoral candidate in newly formed City 31, which of course goes horribly awry. Now, Chimera Squad is placed in charge of the murder investigation and has the unenviable job of trying to maintain peace amidst ever-growing tension between humans and aliens.

While the scale is smaller, XCOM: Chimera Squad has more plot than you would expect from this franchise. Not that other XCOM titles had no plot at all, but most of the most critical or poignant narrative moments usually came from your head-canon as you witnessed the lives and deaths of the soldiers that you personally named and customized. But in Chimera Squad, each one of your units is already a character with a name, personality, class, and even voice-acted dialogue. The game is also fully focused on the events happening in City 31, as well as your attempts to quell the various terrorist organizations that are against the post-war harmony between aliens and humans.

This is a bit of a mixed bag. It’s neat to have a goal other than “save the world” in an XCOM game, and this the first time I can recall where you’re able to control alien units and use their psionic abilities, which is pretty great. However, it feels less personal due to the soldiers already being developed characters rather than avatars that you can slap a silly mohawk on and name after your friends, family, or favorite celebrities.

It might be fine if the story itself was more engaging, but it’s not all that interesting. You investigate a terrorist group, your commanding officer pops in like The Chief from Where In The World Is Carmen Sandiego? to explain what you found, and then the story moves on from there. I like the ideas and new bits of lore that Firaxis is creating for XCOM, but for the most part, I didn’t find this narrative to be all that exciting. 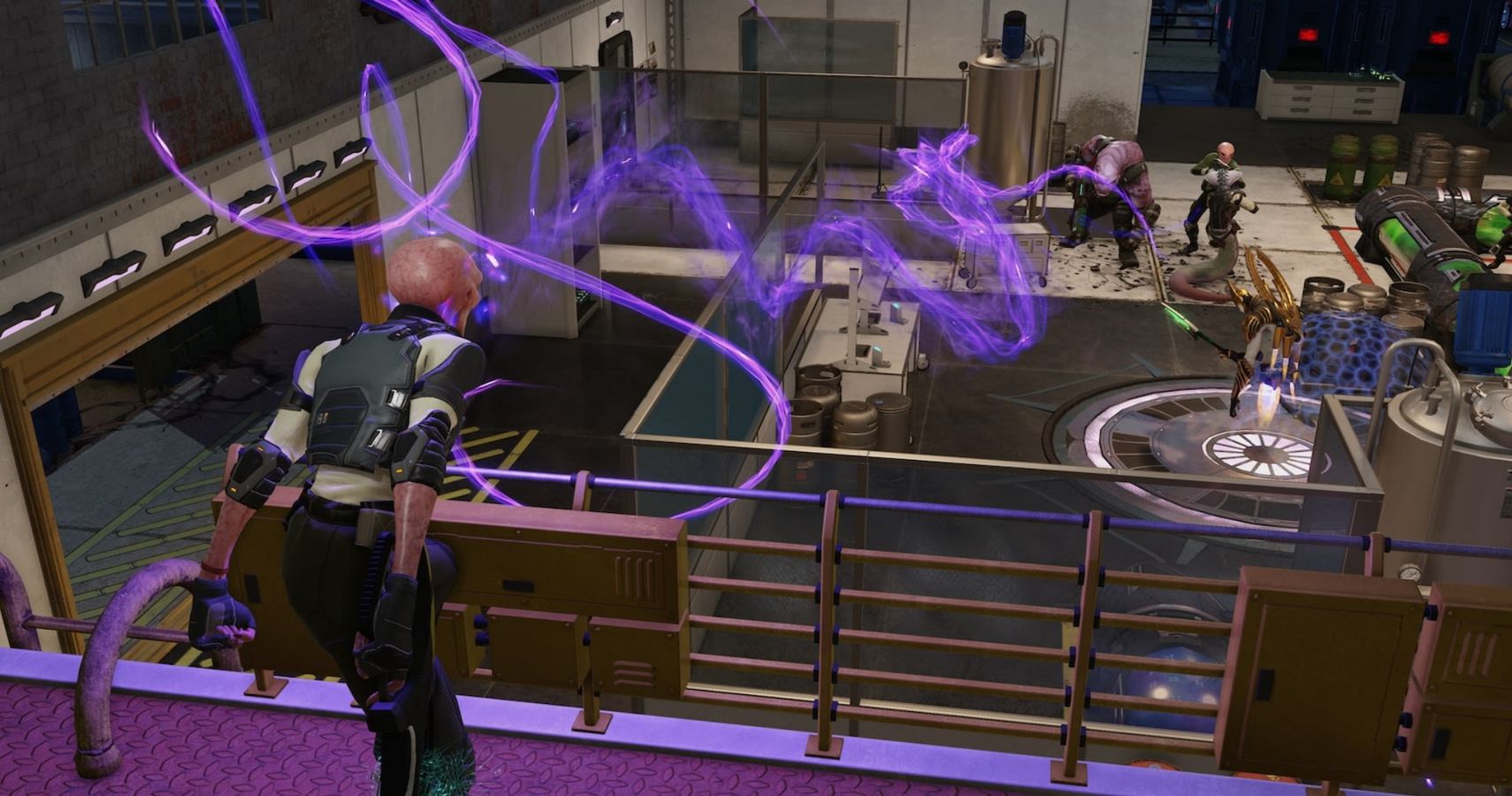 If you’ve played one of Firaxis’ previous XCOM titles, then you should be very well acquainted with Chimera Squad‘s gameplay. For those who haven’t, this is a tactical strategy game where you take your squad and maneuver them into cover so they can shoot enemies or use special class-based abilities. You have a limited amount of actions you can take per turn. Accuracy is determined by a percentage that takes various cover bonuses and disadvantages into account which leads to some frustrating yet amusing moments of failure. In between missions, you research new weapons or equipment, customize the loadouts of your units and figure out where to go and what to do based on the rising anarchy levels on a big city map.  Even though this is an atypical XCOM game it still controls very much like any of the other past titles.

Because your squad is working for the City 31 police department, there are some new gameplay mechanics that pertain to law enforcement. Before combat begins in each mission, your team has to Breach the location. This could mean knocking down the front door, hacking a control panel, blowing up a wall with a breach charge, etc. There are different Breach scenarios that can either give buffs to units – such as the last person inside getting better shot accuracy – or allow aggressive enemies to get a free shot on you. It adds an extra layer of strategy before you initiate combat as you have to weigh your options and consider which entry point better suits the various members of your squad.

Aside from breaching, you can also arrest enemies by walking up to them and knocking them unconscious. Arresting enough enemies can provide you with Intel, which is a resource used to purchases things from the game’s black market or to set up task forces in city districts to lower the levels of unrest. So there’s a risk/reward tradeoff in putting your unit in danger by getting in close to subdue the target. You can also send soldiers that aren’t currently in combat on Spec Ops missions for more resources or put them in Training to improve their stats or get rid of scars suffered in battle.

Some Slight Hitches In The Investigation 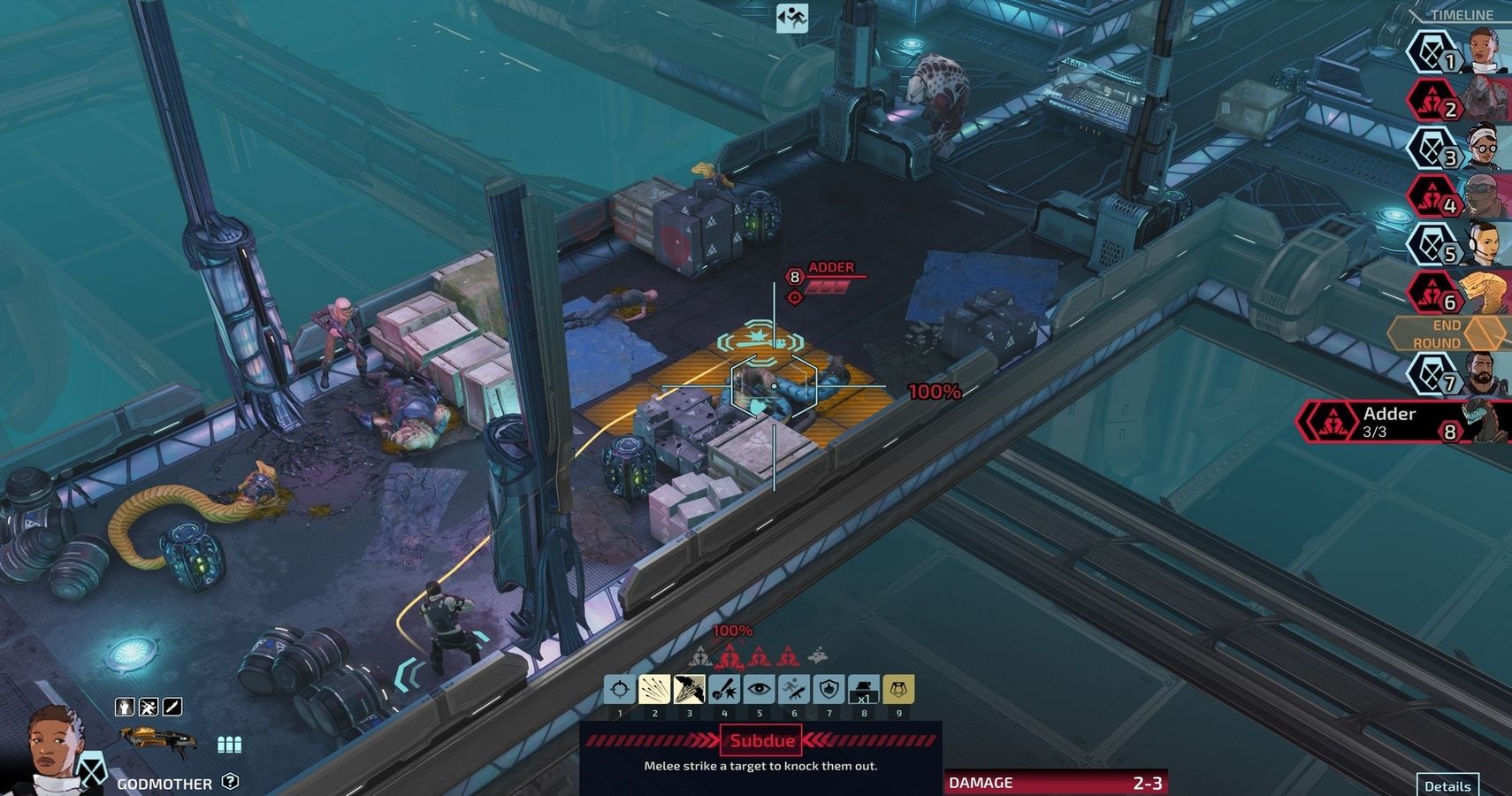 These additions add some new flavor to the XCOM formula. Yet, due to the smaller scale, I found it harder to get invested in Chimera Squad. The combat missions feel less intense and because they take place in cramped spaces like office buildings or warehouses. Fights usually only take place on 1 to 3 maps and are over fairly quickly. To be fair, some XCOM battles could be long, drawn-out affairs that take forever to finish, so shorter excursions are welcome. I just wish there was a little more variation in the locations and scenarios as things felt a tad repetitive at times.

As for Chimera Squad‘s performance, it has a few minor issues. I had some problems even getting the game to load up as it would often crash or freeze upon starting. While in combat the camera had a strange tendency to jump about all over the place and land on different characters even though it wasn’t their turn. There were also some occasional framerate problems or freezing. Nothing that couldn’t be fixed with a patch, but still annoying nonetheless. 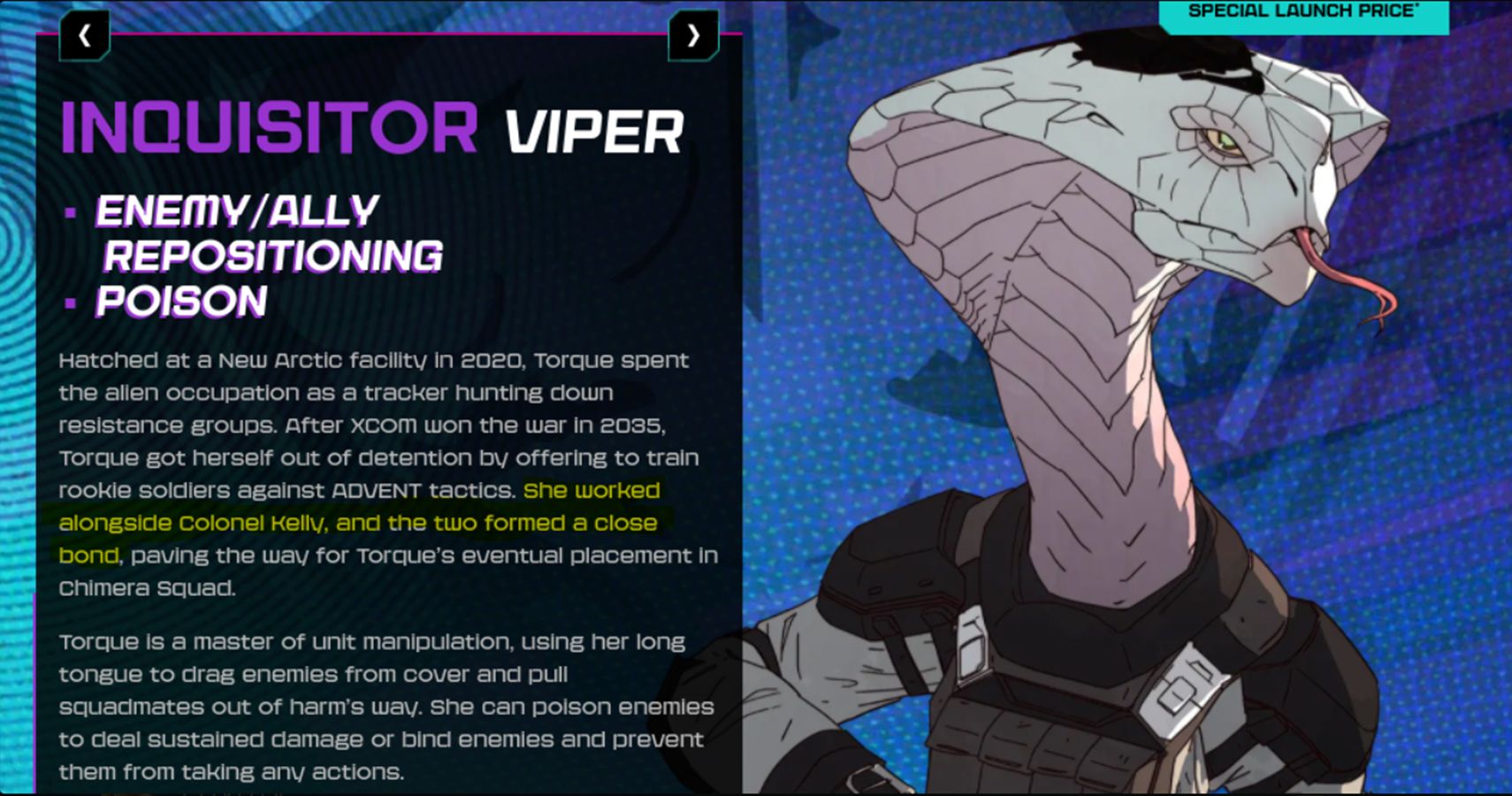 To be honest, aside from a few nitpicks, there isn’t much wrong with XCOM: Chimera Squad. It’s a budget-priced version of the more beefy XCOM games that does everything properly without the grand scope of saving humanity from extinction. It sets up an interesting world for the series to explore going forward where humans and aliens live together while still dealing with the ramifications of the great war. The gameplay is solid, although it is just more XCOM with some small additions that fit the law enforcement theme.

The only real problem is that it feels like a stopgap between XCOM 2 and whatever XCOM 3 might be. It neither tarnishes the XCOM name nor does it do anything revolutionary. It also has the poor luck of coming out around the time as the stellar Gears Tactics which is this game’s top competition for the attention of strategy fans, which probably isn’t going to help its sales.

If you like the XCOM series and fancy the chance to take command of a snake soldier, then XCOM: Chimera Squad will still scratch that tactical, cover-shooting itch.