Acer Predator Triton 500 Review: This thin and light laptop even has GeForce RTX

Acer’s Predator Triton 500 is a gaming laptop we’d actually want to carry around. Sure, we may look hungrily at a monster gaming laptop that’s nearly as fast as a desktop gaming PC. But if you have to take it with you, the era of thin, light and powerful gaming laptops is a godsend.

This review is part of our ongoing roundup of the best gaming laptops. Go there for information on competing laptops and how we tested them, and up-to-date buying advice. 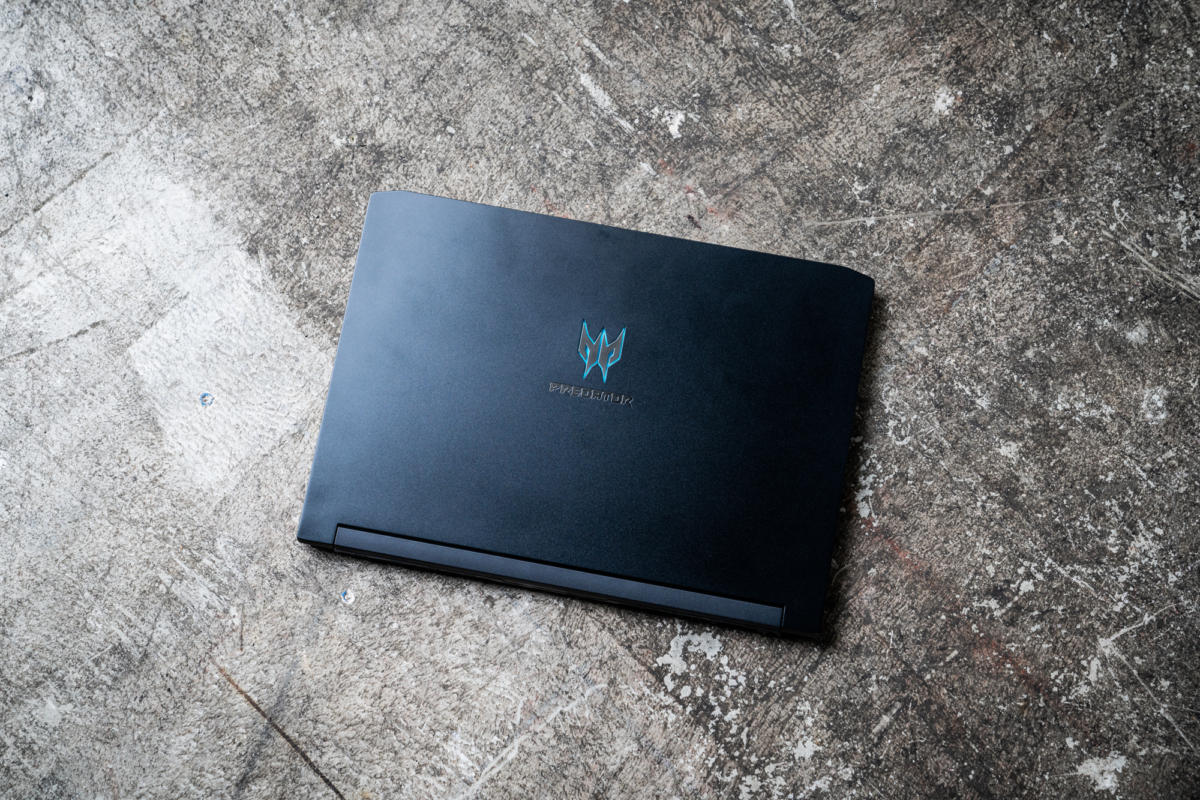 The Predator Triton 500 is one of the first gaming laptops we’ve tested with Nvidia’s RTX mobile chip. Even though its CPU is “merely” 8th-gen when 9th-gen CPUs have recently become available, that GPU matters a lot more when it comes to gaming. Here are the details:

The Predator Triton 500’s size and weight put it in the thin-and-light gaming category. Granted, it’s almost 12 ounces ounces heavier than, say, the original MSI GS65 Stealth we reviewed. However, MSI has since beefed up the original with newer components, and the latest version (which we’re still reviewing) weighs about 4.4 pounds. 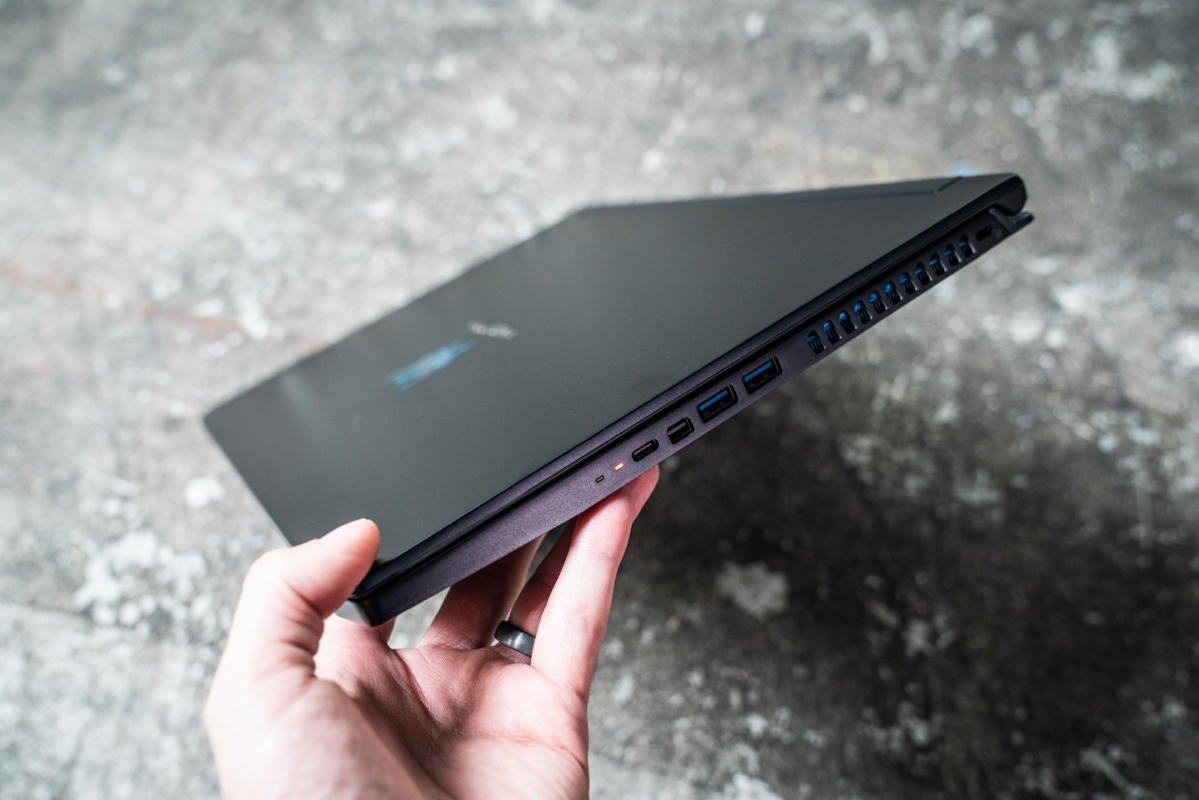 You get two USB-A ports, a miniDisplayPort and Thunderbolt 3 on the right side of the Predator Triton 500.

The right side of the Predator gives you a full-size HDMI port, analog mic and headset jack, a third USB-A port, a dedicated charging port, plus ethernet with support for 2.5 Gigabit using a Killer E3000 controller. 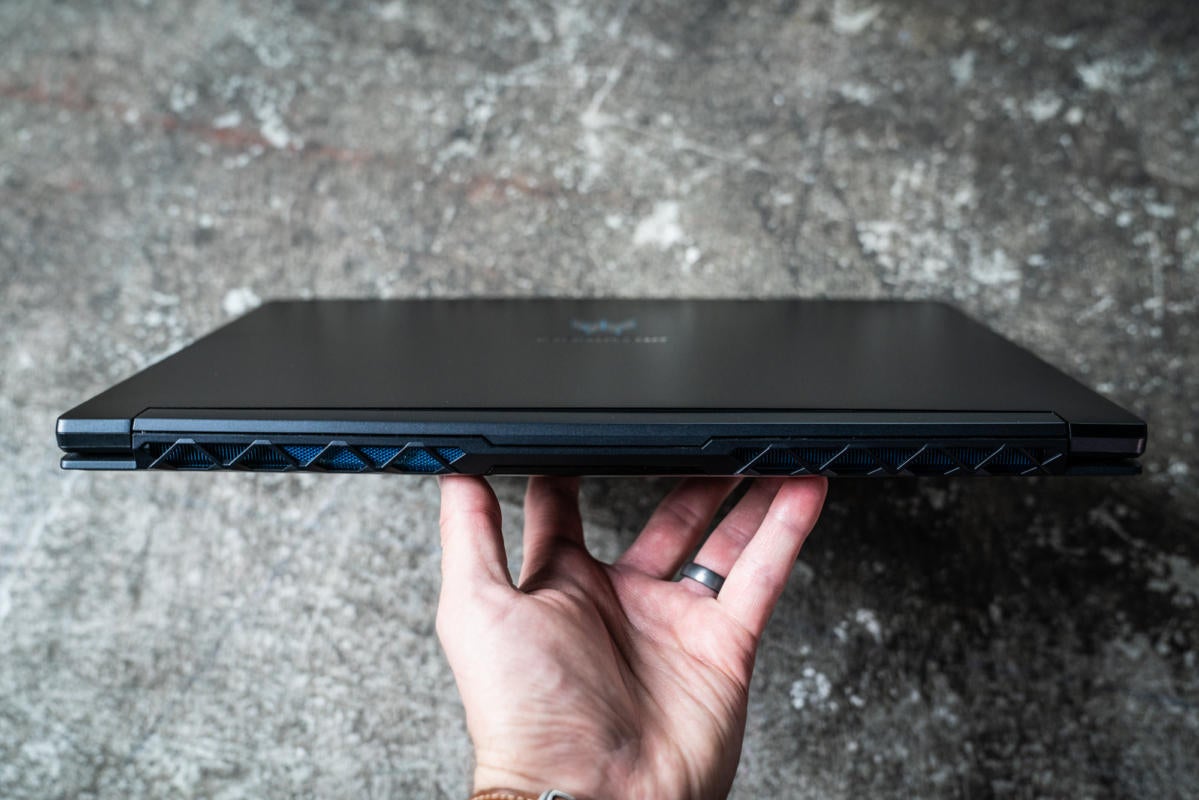 The back of the Predator Triton 500 is heavily vented and features beautiful anodized-blue cooling fins.

The Triton 500’s keyboard makes no major gaffes, and we like that Acer went with full-size cursor keys rather than the compressed keys you find on some laptops. The trackpad is fairly smooth, although with a slight drag to its surface. To its credit, however, it’s correctly sized and properly centered on the Y key. We’ve sometimes seen trackpads shifted an inch to the right, which caries the risk of placing more of your palm on the trackpad.

The only real stickler for some is that the keyboard has three-zone lighting rather than per-key lighting. For the price Acer wants for this laptop, the competition gives you per-key lighting. 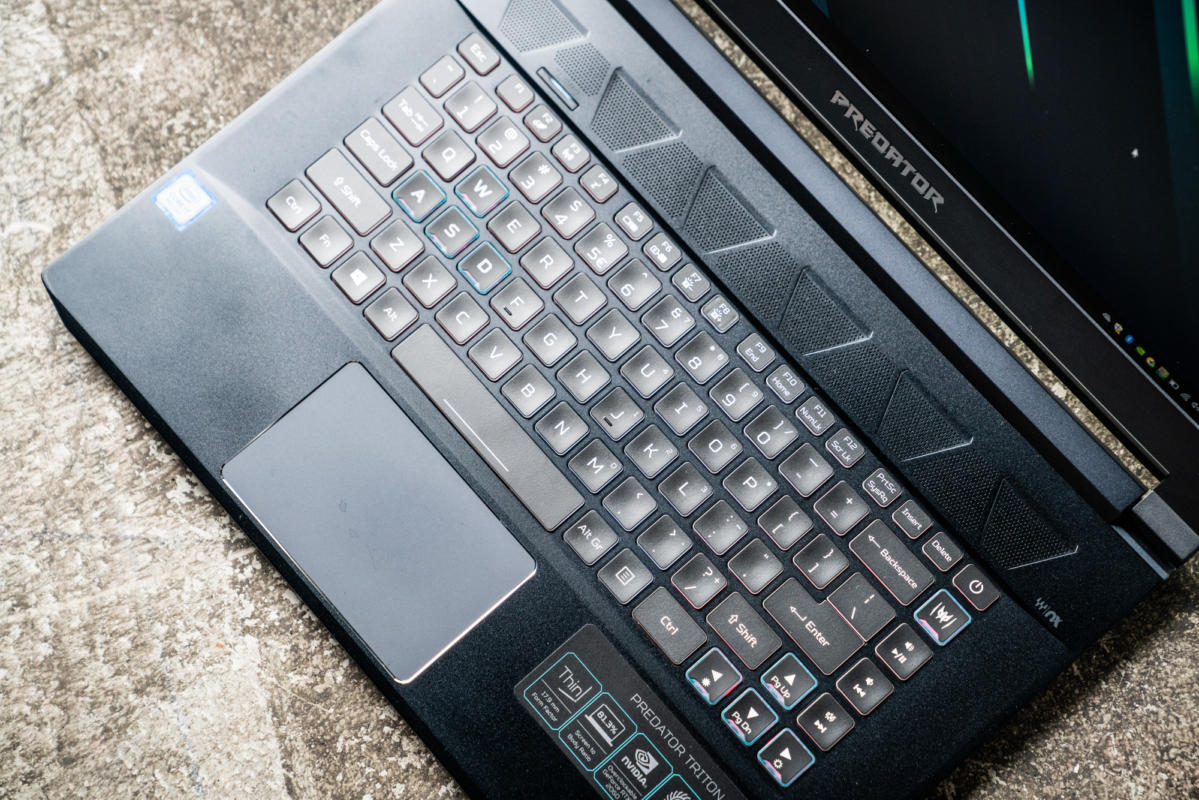 The trackpad and keyboard are good, and we appreciate that Acer doesn’t go with compressed cursor keys. The only negative is the use of a three-zone RGB keyboard, when most of its direct competitors feature per-key RGB keyboards.

You can’t swap the GPU or CPU on most thin gaming laptops, but gamers do like the ability to add more storage down the road, or even RAM. Unfortunately, while the Predator Triton 500 uses standard DDR4 SO-DIMMS and features two M.2 slots the laptop, an inverted motherboard places the M.2 and RAM out of reach.

You could upgrade the RAM or storage, but doing so would require removing ribbon cables and pulling the entire motherboard out of the system. To be fair, the vast majority of people never will attempt to crack open a gaming laptop, but we prefer designs that make any attempt easier. 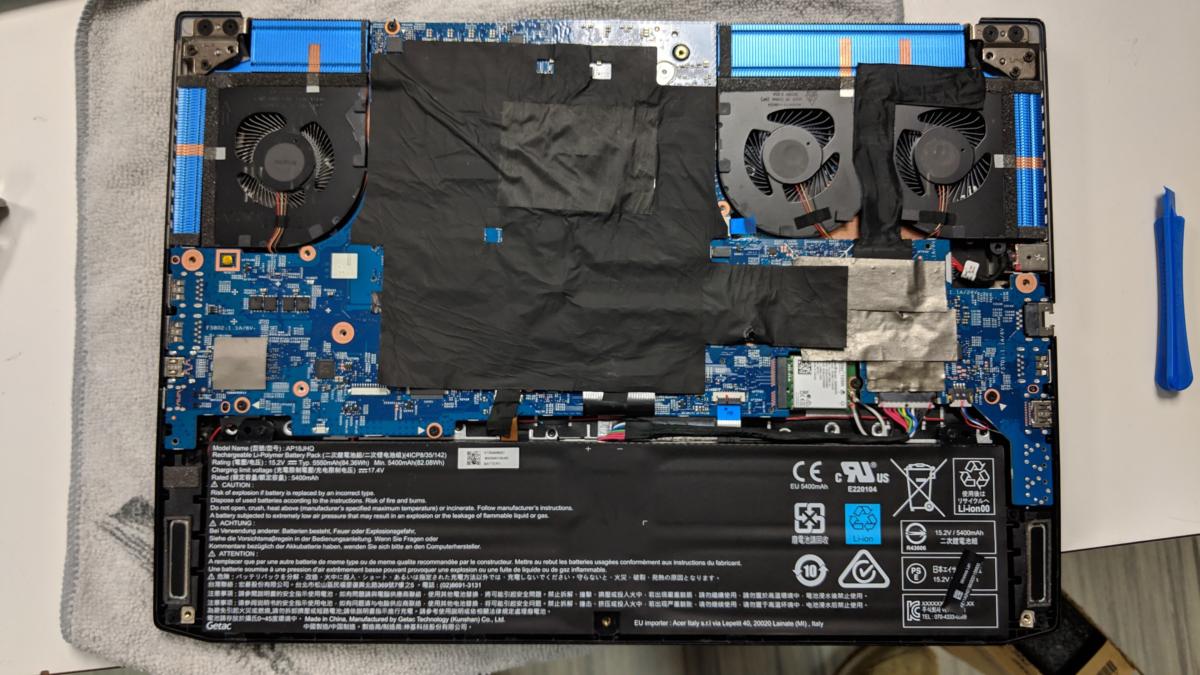 The Acer Predator Triton 500 uses an inverted motherboard design, which requires pulling the board out to get to the M.2 and RAM slots. You can at least swap out the WiFi module if you wanted though.

The Predator Triton 500 you see here features Intel’s 8th-gen Core i7-8750H, rather than the newest 9th-gen Core i7-9750H. If that makes you think this laptop is already out of date, take a chill pill.

There is a difference between the two generations of chip, but it depends on the workload. Overall, you’re looking at a 10- to 11-percent difference at most. In long-running, heavy tasks (such as gaming or video encoding), they’re more like dead even. (Keep in mind, we’re referring to the Core i7 chips. If you’re looking at 8th gen Core i9 vs. 9th gen Core i9, all bets are off.)

Don’t believe us? Check out our tests. The first is Maxon’s Cinebench R15, a medium-duty test. As you can see, the Predator Triton 500 holds its own against other 6-core Core i7 chips, but it lags the recently updated MSI GS65 with its Core i7-9750H by about 12 percent. That’s a decent amount, but we’re still not talking about more cores or new instruction sets. 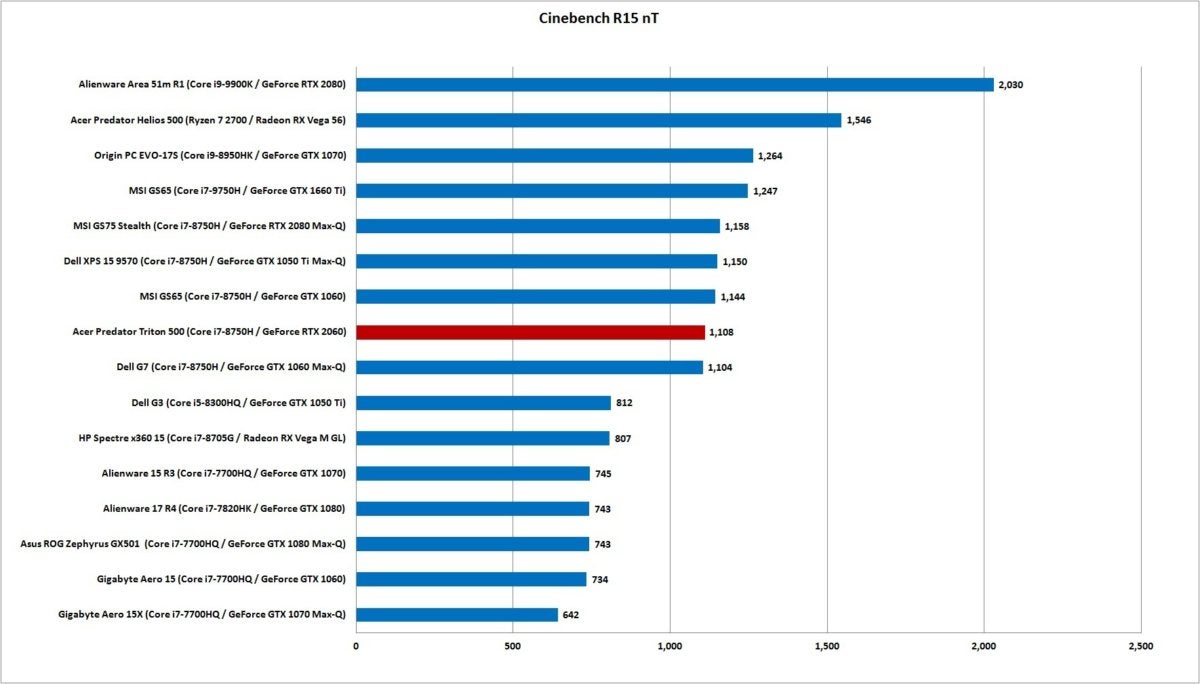 When you move into single-threaded performance, the gap closes up quite a bit. We’re basically looking at a massive tie between most 8th-gen Core i7-8750H laptops and the newer 9th-gen Core i7-9750H, with about a 5-percent difference in performance. 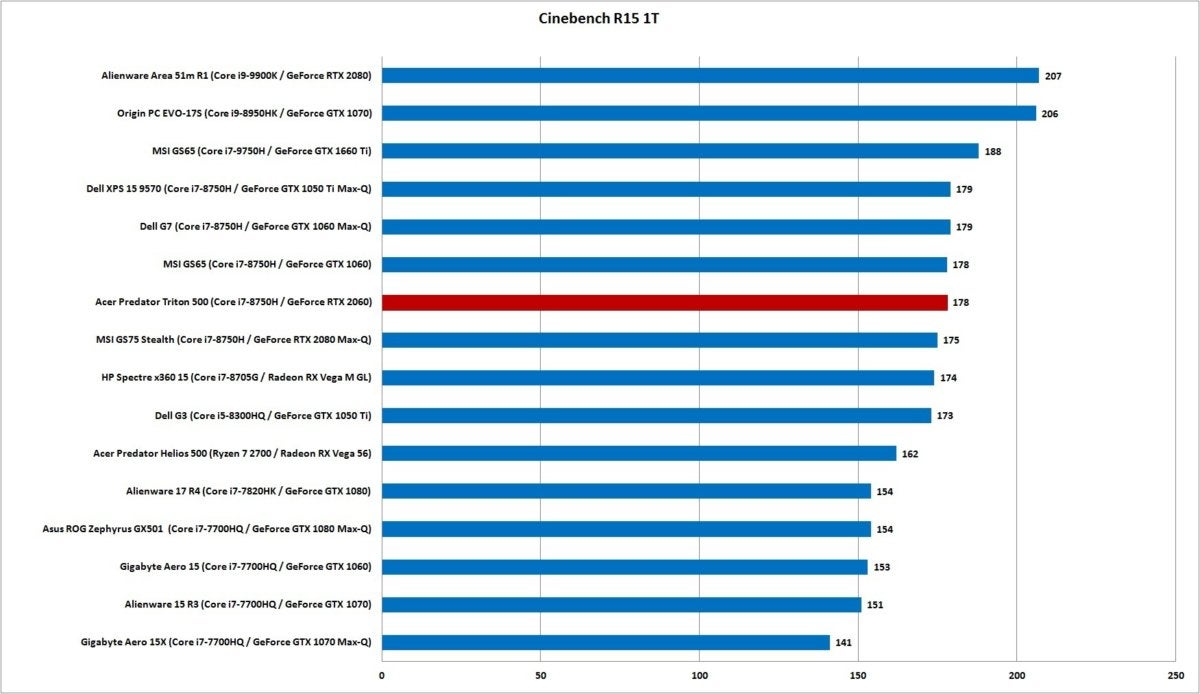 Both Cinebench tasks take just a few seconds to a few minutes to run. To see how the CPU in the Predator Triton 500 handles a longer, more intensive load, we encode a full-length movie to run on an Android tablet. This task can take 15 or 20 minutes on a high-end CPU with good thermals, or 45 minutes or more on a CPU with less power or worse heat management. The Predator Triton 500 comes out slightly faster than most other Core i7-8750H laptops we’ve tested, and essentially tied with the 9th-gen Core i7-9750H in the updated MSI GS65. 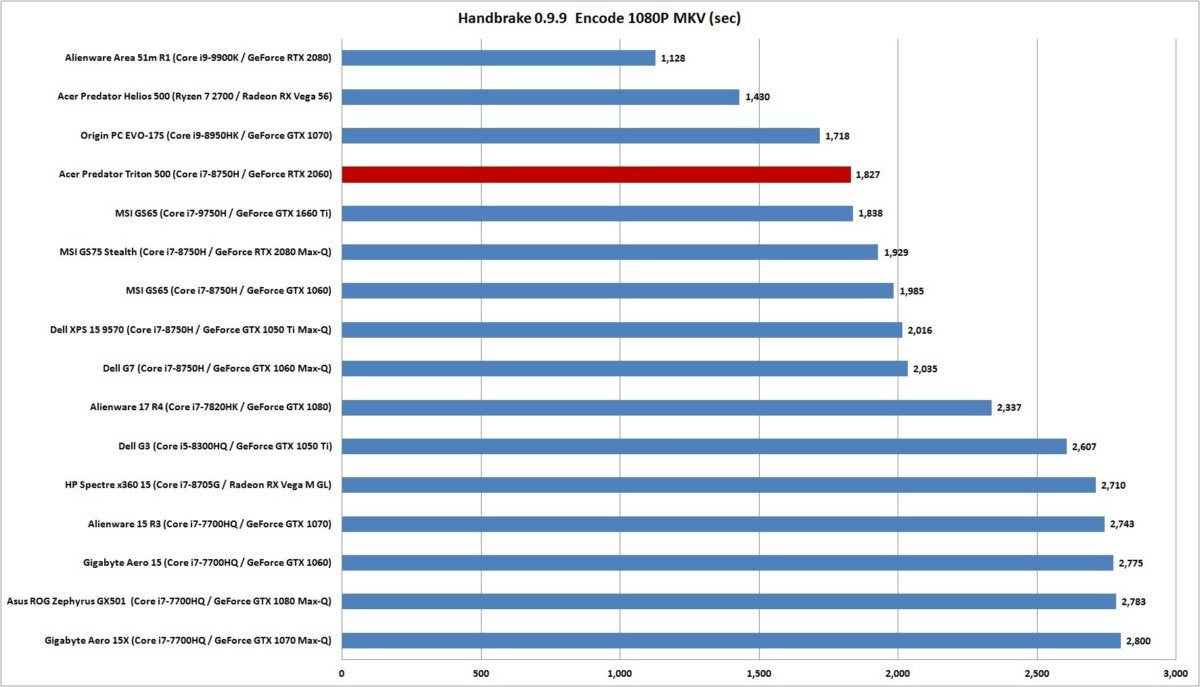 In a longer tasks, such as a 30-minute video encode, it’s pretty much a tie.

The upshot on CPU performance is that the Predator Triton 500’s 8th-gen CPU is a bit slower than its 9th-gen counterpart. But we’re not talking the huge leap we saw going from 7th-gen Kaby Lake laptops to 8th-gen Coffee Lake laptops.

The Predator Triton 500’s GPU may help you forget the mild shortcomings of its CPU. Inside we find none other than Nvidia’s GeForce RTX 2060 GPU. It’s essentially the same as the desktop GeForce RTX 2060, with lowered clock speeds and power consumption for laptops.

Because we were interested in the GPU itself, we first ran UL’s 3DMark Fire Strike test and recorded the graphics score. 3DMark is generally a pure GPU test, but by looking at only the graphics sub-score, we lock in on just graphics performance. 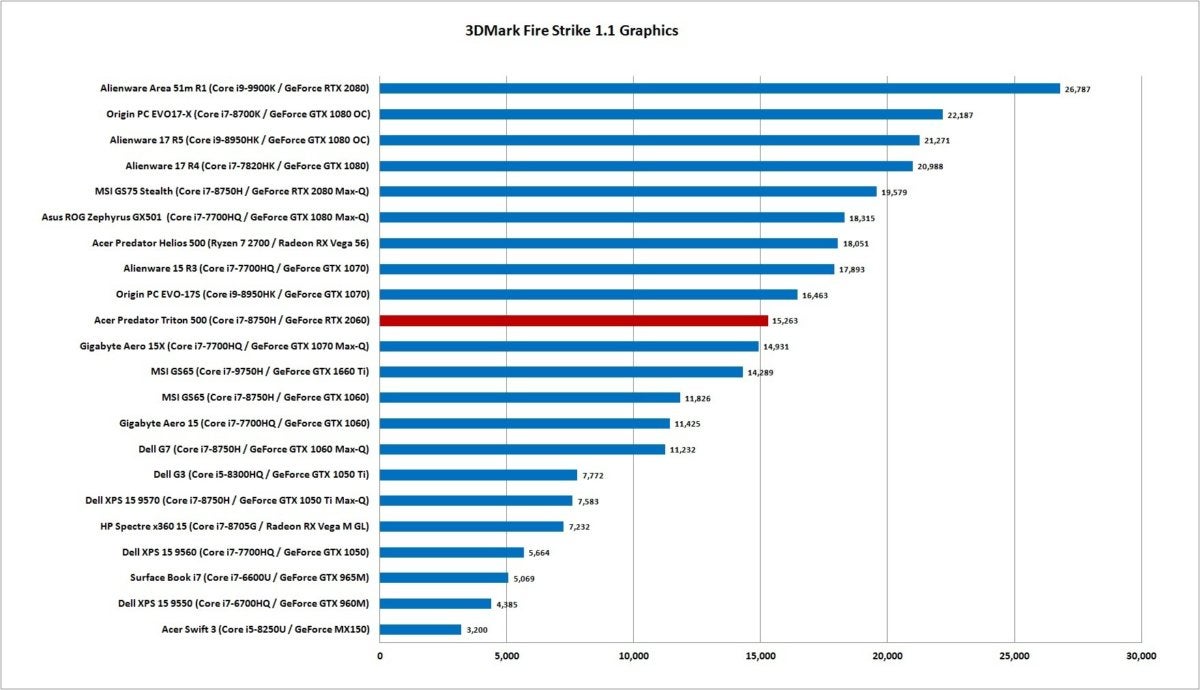 Some of this is likely related to the DX11 benchmark, though. We also ran 3DMark Time Spy on the laptop which uses DirectX 12 and uses a magnitude more modern graphics features.

When pushed harder with the newer features, the GeForce RTX 2060 in the Acer Predator Triton 500 closes up nearly even with the fastest GeForce GTX 1070 laptops, as well as the Radeon RX Vega 56 GPU in Acer’s Predator Helios 500.

You may doubt the synthetic tests, but they’re backed up by games, too. For example, we ran Rise of the Tomb Raider set to Very High at 1920×1080 resolution in DX11 mode (our standard setting for gaming laptops). As you can see, the Acer Predator Triton 500 again finds itself squeezed between GTX 1070 and GTX 1070 Max-Q laptops. 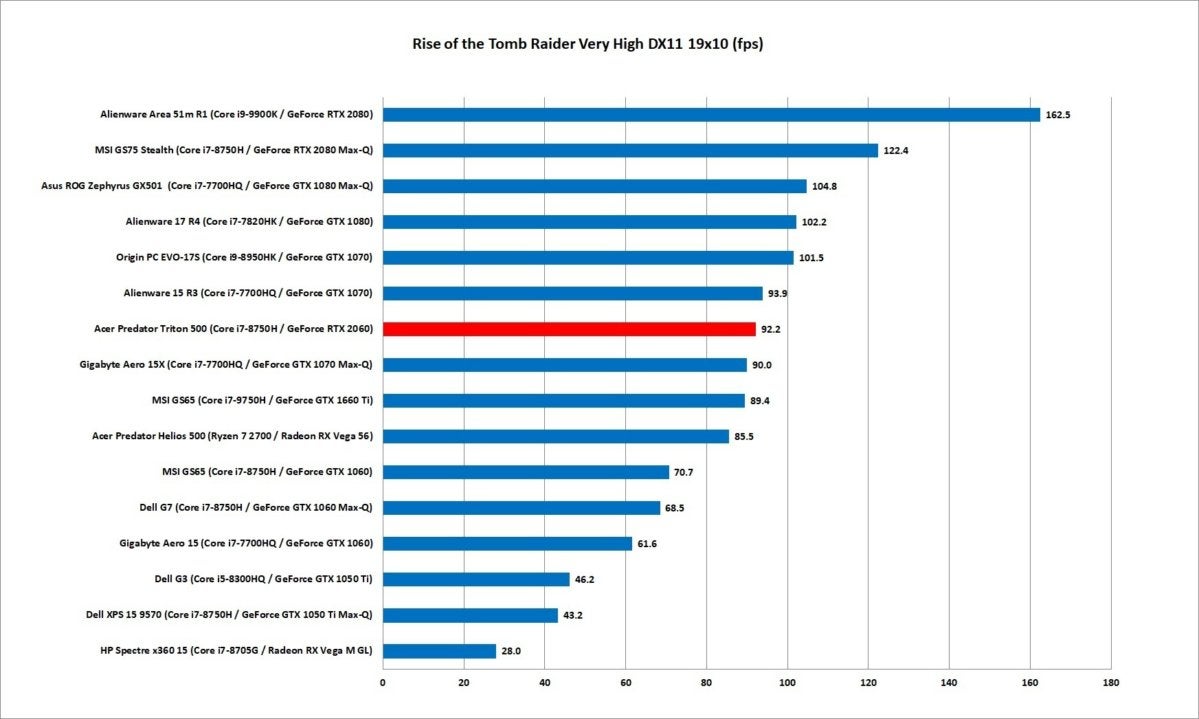 Ubisoft’s Rise of the Tomb Raider test results match that of 3DMark.

Our final gaming test uses Middle-earth: Shadows of Mordor set to 1920×1080 resolution and ultra. Again: there’s no surprise. Basically expect the Acer Predator GeForce RTX 2060 to perform at or near full-tilt GeForce GTX 1070 performance most of the time. Considering how thick some of the gaming laptops were, you can consider this a win.

One last mention: It has a physical turbo button. Turbo buttons do different things on different laptops. In the Predator Triton 500, it gives you a GPU performance boost of about 10 percent or so, while the CPU remains mostly the same. We had no stability issues using the turbo button, and we’ll note that it resets after any reboot. 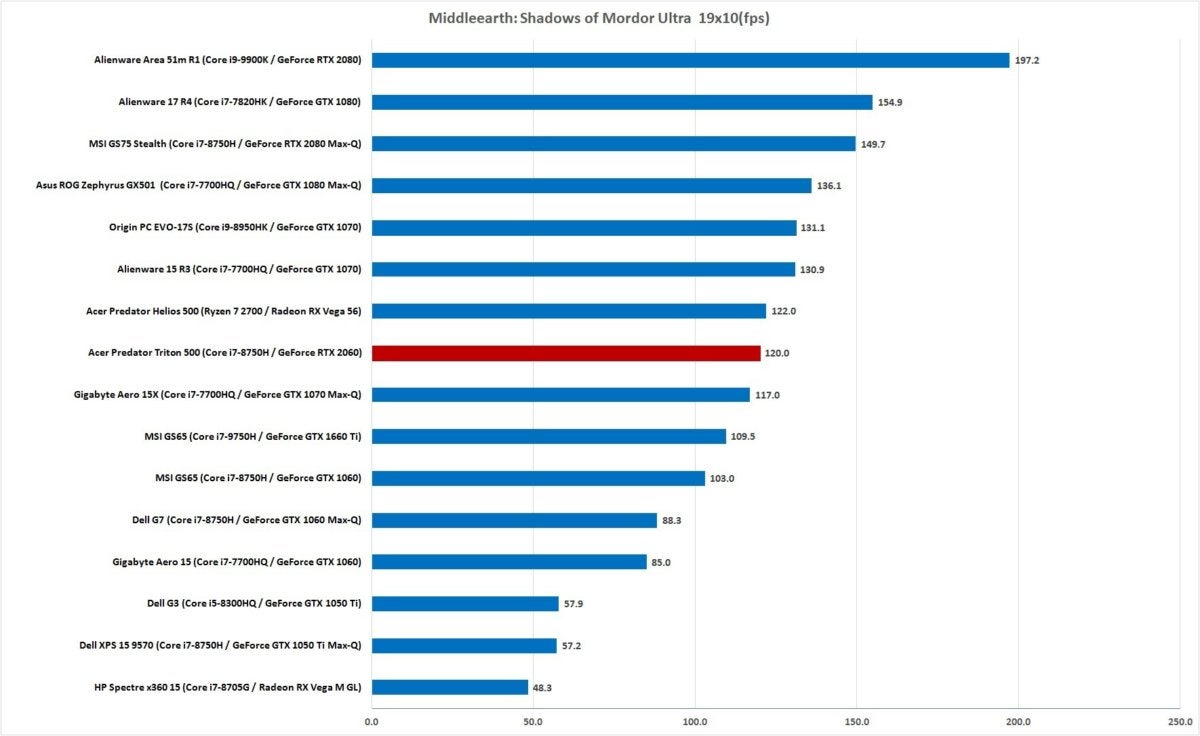 The last performance test is probably the most important to most laptop owners: Battery life. We measure battery life by playing a looped 4K resolution video file in airplane mode using earbuds, with keyboard backlighting turned off. For screen brightness we run at 250 nits to 260 nits, which is comfortable for a lit office environment.

Although 4K video was once a stress test for laptops, most laptops today are on cruise control, while the integrated graphics does all of the heavy lifting using dedicated circuits. With its 82-watt-hour battery, the Predator Triton 500 comes in just under 6 hours of playback time. Overall we’d rate it at decent. It’s a little lower than comparably sized powerful laptops, but still quite good.

Mind you: This is for video playback. We predict if you used Office, you’d get slightly less runtime. If you browse the Internet, expect to burn more battery. And if you edit video or fire up the GPU to play games, expect far worse battery life.

That’s not the fault of the Predator Triton 500—it’s what you’ll get on any laptop with the CPU or GPU working hard. 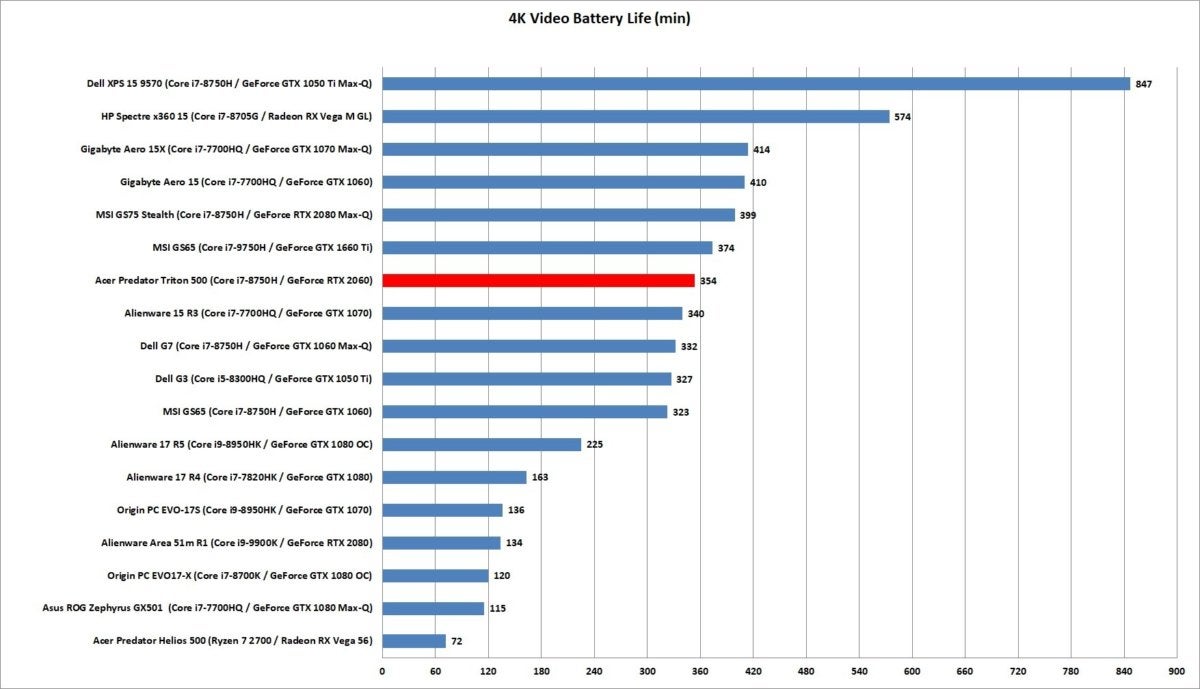 So where does the Predator Triton 500 land? At $1,800 for the version here, it’s decently priced. We say that because we know some will want to compare the Predator Triton 500 to other laptops with the same or slightly better components, and a similar or smaller price. We’d bet a box of donuts those laptops are generally bulkier, though.