AliveCor, a startup developing algorithms that detect atrial fibrillation, bradycardia, tachycardia, and other health issues from heart rate readings, today raised $65 million in funding. The company says the proceeds will be used to bolster go-to-market efforts as AliveCor kicks off a partnership with Omron to provide at-home blood pressure monitoring tech to customers.

Over the past few months, in response to the pandemic, companies like Current Health and Twistle have teamed up with the Providence and other health care providers to pilot at-home COVID-19-tracking platforms. Beyond the pandemic, investors see lots of potential in digital biomarker monitoring for telehealth. In a case in point, Healx raised $56 million to further develop its AI platform that seeks new drug treatments for rare diseases. Elsewhere, Viz.ai recently secured $50 million for AI that detects early signs of stroke, and Verisim Life closed a $5.2 million seed round to create AI-powered biosimulations that can replace animal drug testing.

AliveCor was cofounded by David Albert, a doctor and former chief clinical scientist of cardiology at GE, along with scientists Bruce Satchwell and Kim Barnett. In 2010, Albert demonstrated a prototype of an iPhone ECG through a YouTube video. After the video went viral, he was approached by venture capitalists and partners to fund what became AliveCor. 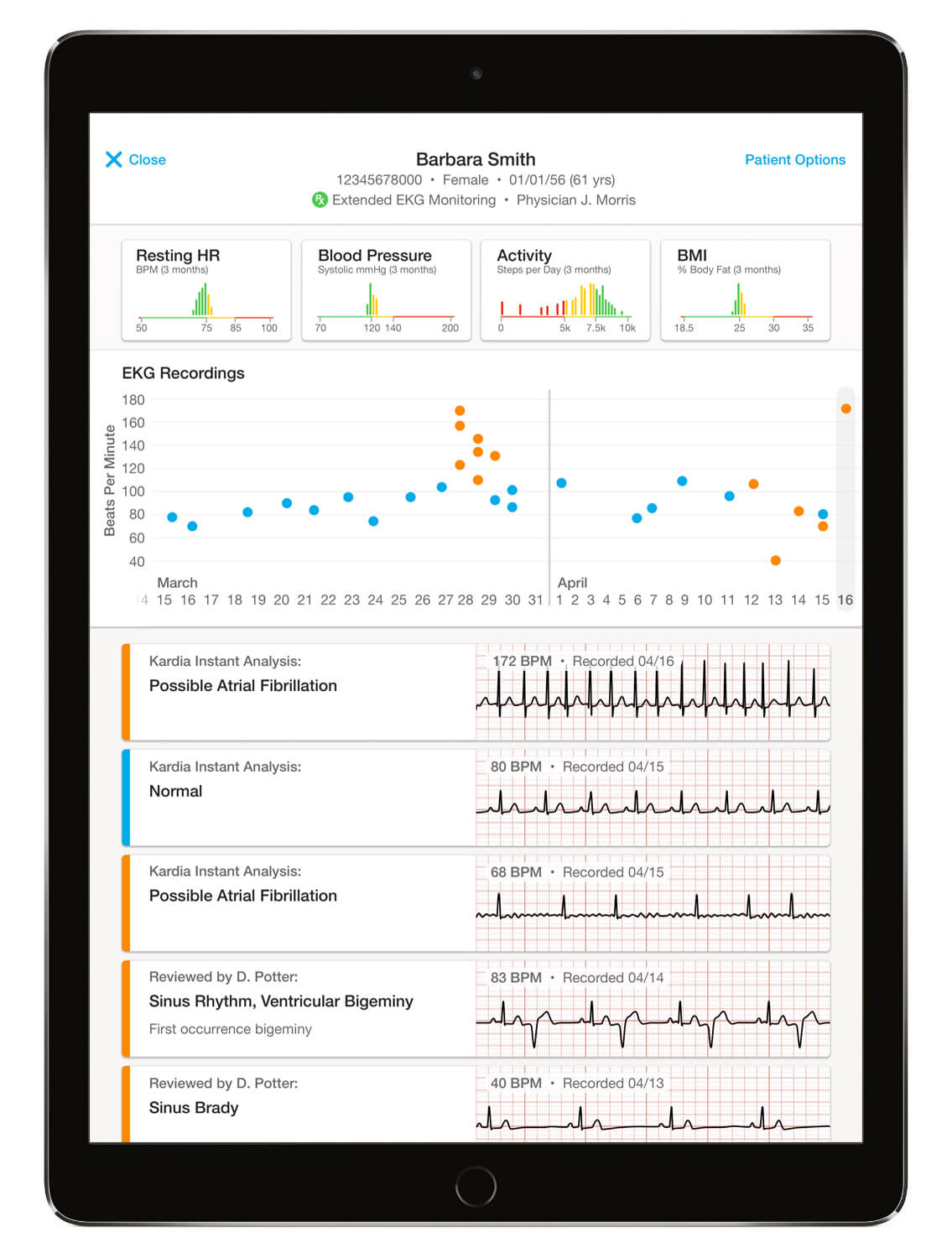 AliveCor released its first device — an FDA-cleared smartphone case that worked as an ECG — in 2012, followed by a credit-card-sized reader. While its first products relied on doctors to analyze the readings, in 2015, AliveCor received clearances from the FDA to provide algorithmic analyses of readings. By 2017, AliveCor’s software was using AI models to “train” its products to identify heart problems. According to the company, the current model contains more than 300,000 parameters (variables internal to the model that determine its predictions) and takes about seven minutes to train on a new user. AliveCor’s platform builds a heart profile of a specific user (including how the electrical system within a heart is firing) after about a month of use.

AliveCor sells a range of products under its Kardia brand that are cleared by the U.S. Food and Drug Administration to capture a “medical-grade” electrocardiogram (ECG) in 30 seconds. They pair to an Android or iOS smartphone to store the ECGs and allow users to email readings to nurses, aids, or primary care physicians. Kardia devices range in price from $99 to $150, with some eligible for purchase using an HSA or FSA account. Customers who choose to subscribe to AliveCor’s KardiaCare program ($99 per year or $179 for two years) gain access to additional features like cardiologist ECG reviews, monthly heart health reports, medication tracking, cloud storage, and discounted device replacements.

AliveCor has partnered with academic institutions to conduct a number of clinical studies, including one with the Cleveland Clinic showing its products could distinguish between atrial fibrillation and normal heart rhythms with high accuracy. In 2017, AliveCor was conducting research with Columbia University and the Mayo Clinic to determine if the company’s hardware could identify early warning signs of Long QT syndrome. And in 2018, AliveCor collaborated with the Mayo Clinic on a study indicating that the KardiaBand could detect hyperkalemia, or elevated levels of potassium in the blood, with 90% to 94% accuracy.

AliveCor was granted a “breakthrough device” designation for hyperkalemia detection in September 2018.

AliveCor says that it’s sold over a million KardiaMobile units to date and recorded over 85 million ECGs from its customers. Since the pandemic began, Kardia devices have taken nearly 15 million ECGs, an increase of 70% year-over-year, reflecting what Abani characterizes as pandemic-related demand.

“We are grateful for the continued confidence of our investors” Abani said in a statement. “This financing speaks to the transformative power our technology brings to the healthcare system. We remain positioned to fulfill our vision of delivering AI-based, remote cardiological services for the vast majority of cases when cardiac patients are not in front of their doctor.”