Menlo Security raises $100 million to beat back malware with algorithms

Menlo Security, a provider of endpoint-free cloud solutions that protect organizations from cyberthreats, today raised $100 million at an $800 million valuation. The company says the proceeds will be put toward go-to-market, sales, and global expansion efforts.

According to some experts, cybercrime is up 600% due to the pandemic. Even before it, malware activity was on the rise, with an estimated 61% increase between December 2018 and January 2019. Perhaps unsurprisingly, a recent Accenture analysis of almost 1,000 cyberattacks revealed that malware was the most frequent type.

Enterprise-scale antimalware tools aren’t exactly novel, but what Menlo brings to the table is an air-gapped approach that cuts off networks from the web without impeding internet usage. Email attachments and web requests are proxied through the cloud-hosted Menlo Security Isolation Platform (MSIP) rather than sent from local devices, and active content like ads, background trackers, and beacons are executed in a sandboxed remote environment. The company claims that this effectively shields machines from the sorts of sophisticated spyware, ransomware, and phishing attacks that bypass on-premises defenses.

Earlier this year, Menlo launched Menlo Security Cloud DLP, a product that repurposes the company’s isolation technology to monitor data leaving the enterprise. It’s agentless, meaning Cloud DLP can examine data for movement — passing, copying, and pasting — instead of using agents to manage activities. And it’s visible even if the data in question is masked or encrypted. 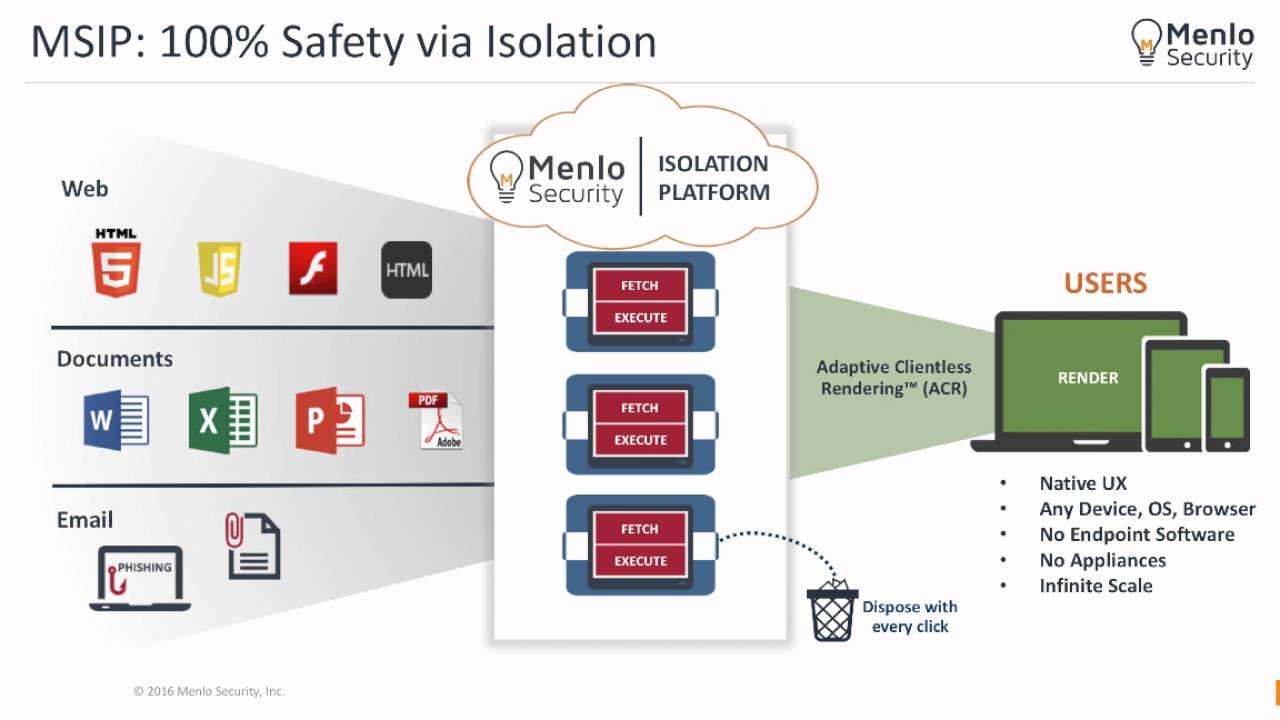 Menlo claims that the bulk of customers see at least a 95% decline in credential loss and similar reductions in corporate data leakage. As for end users, they’re afforded an experience that’s “nearly indistinguishable” from a local browser, with native browser menus, extensions, copy and paste functionality, and find and print tools.

This summer and fall, Menlo claims to have identified a credential phishing campaign targeting the hospitality industry and stopped an HTML smuggling campaign called Duri that delivered malicious files to devices. The company’s customers include “hundreds” of companies (including Macy’s and Fujitsu) with “millions” of users, for which it’s currently blocking about 500 million websites daily. The world’s 10 largest banks, four of the five largest credit card issuers, and major energy and transportation companies are among Menlo’s other clients, along with the Defense Information Systems Agency, the U.S. Department of Defense’s IT combat support agency.

In July, Menlo says it saw more than 117% quarterly growth in registered deals by partners and 45% revenue growth as it added 25 new partners. (The company was recently awarded a $198.9 million grant by the U.S. Defense Information Systems Agency to rearchitect security infrastructure and secure internet access for up to 3.5 million U.S. Department of Defense users.) Menlo also says that annual recurring revenue is up 115% year-over-year thanks to a 100% increase in average deal size.

“We currently support millions of users and have over 350 customers and expect to reach 400 by the end of the year,” a spokesperson told VentureBeat via email. “We currently have about 260 employees and are continuing to expand our team with the expectation that we’ll be in the 300 range by the end of the year … As we look toward our next phase of growth, we’re keenly focused on three key verticals: financial services, federal, and health care. We expect this recent momentum is only the beginning and we’re excited to see where the company goes next.”