During its annual GPU Technology Conference, which kicked off with a virtual keynote today, Nvidia unveiled a slew of health care-related initiatives aimed at accelerating workloads in drug discovery, preventative medicine, and more. The company announced a partnership with GlaxoSmithKline (GSK) to help develop an AI-powered lab for vaccine and treatment discovery. Nvidia detailed an AI model it built in collaboration with Massachusetts General Brigham Hospital to predict the oxygen needs of patients with COVID-19 symptoms in emergency rooms. And the company revealed that it will contribute hardware and expertise to what is expected to be the U.K.’s fastest supercomputer, Cambridge-1.

Cambridge-1, which Nvidia expects will come online by year-end 2020, is a joint project between GSK, AstraZeneca, Guy’s and St Thomas’ NHS Foundation Trust, King’s College London, and Oxford Nanopore. Built on Nvidia’s DGX SuperPOD architecture, it’s anticipated to deliver over 400 petaflops of AI performance and 8 petaflops of Linpack performance. That would rank it 29th on the TOP500 list of the world’s most powerful supercomputers and among the top three most-energy-efficient machines in the Green500.

Nvidia says Cambridge-1 will be the first of its supercomputers designed for external R&D access. Powered by 80 Nvidia DGX A100 systems connected by Nvidia Mellanox InfiniBand networking, it will purportedly be possible to install and launch it within a matter of weeks. 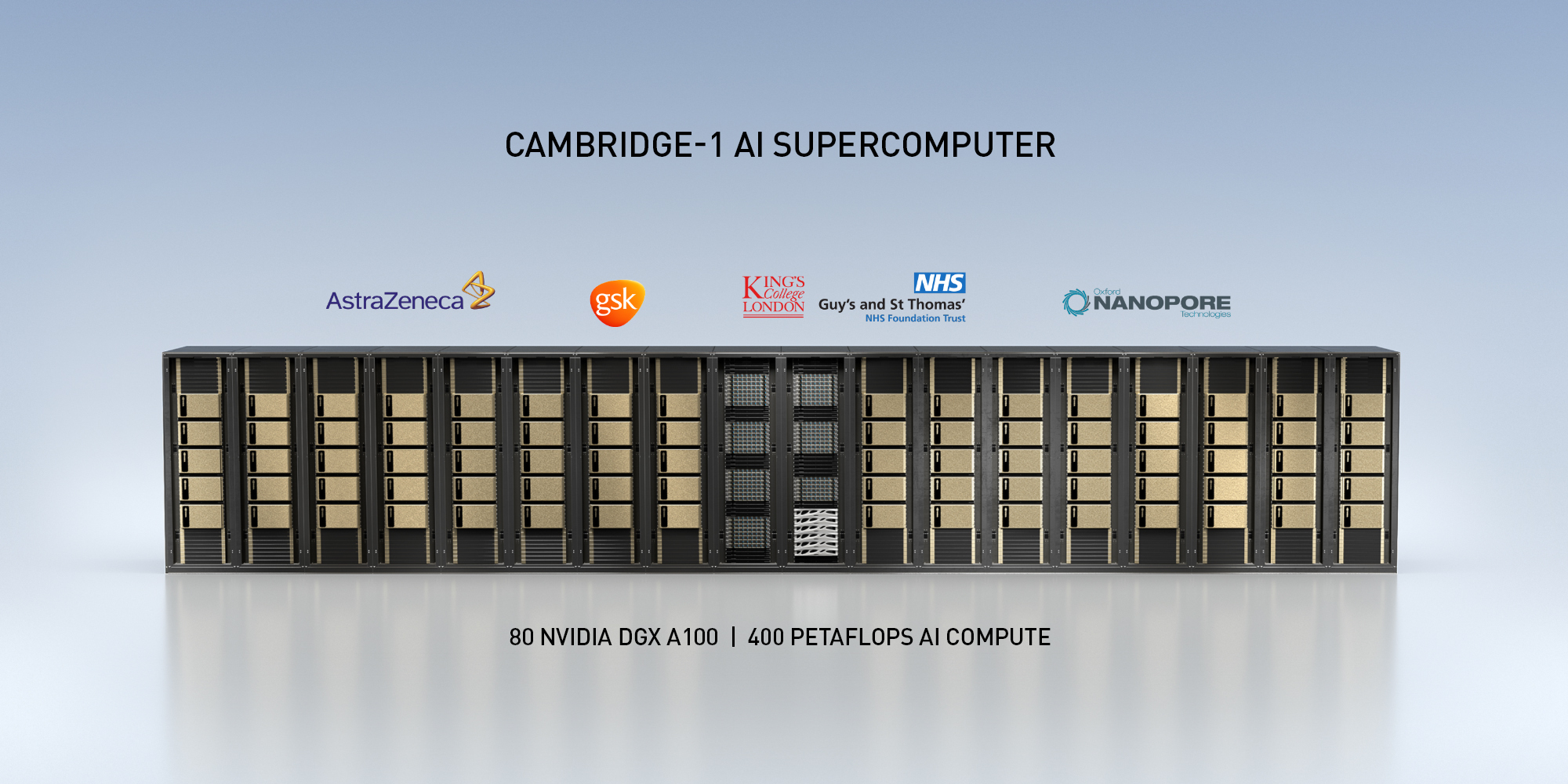 According to Nvidia, research on Cambridge-1 will focus on solving large-scale data science problems that otherwise couldn’t be tackled due to their size. Compute time will be donated to universities and startups, and Cambridge-1 will become part of Nvidia’s planned U.K. Center of Excellence, which will eventually expand to include new machines and industries throughout the country.

Nvidia says it worked with Massachusetts General Brigham Hospital to create a model that combines imaging and health records to help clinicians manage hospitalizations. Using anonymized patient data — and regardless of geographic location, patient population, and data size — the system can ostensibly determine whether a person with COVID-19 symptoms will need supplemental oxygen hours or even days after an initial exam.

The model’s foundations lie in CORSIK, an oxygen needs prediction system developed by scientist Dr. Quanzheng Li at Mass General Brigham. In an effort to generalize it to as many populations as possible, Nvidia and Mass General Brigham launched an initiative called EMR CXR AI Model (EXAM) canvassing over 20 health systems in North and South America, Canada, Europe, and Asia.

Above: The EXAM model’s architecture.

Each hospital participating in EPIC trained their models locally using a technique called federated learning. Rather than pooling patient chest X-rays, vitals, lab values, and other confidential information into a single location, each used a secure in-house server. A separate server hosted on Amazon Web Services (AWS) held the global deep neural network, and each participating hospital got a copy to train on its own dataset. Health systems shared only a subset of the model weights (values within the model that determine predictions) with the global model in a privacy-preserving fashion.

Nvidia says that in two weeks, EXAM achieved a model with 0.94 area under the curve, which roughly translates to 94% accuracy. It’s scheduled to be released in the coming weeks.

Nvidia says its work with GSK and its AI group will involve the use of genetic and genomic data to improve treatment design. The company intends to furnish GSK with GPU optimization and pipeline development tools like Clara Discovery and access to Cambridge-1. Moreover, Nvidia plans to collaborate on GSK’s AI hub, which will use biomedical data and computing platforms to uncover genetic and clinical insights.

“GSK and Nvidia together will help push the boundaries of what AI can do and put vast data sources to work to advance the discovery of new medicines and vaccines,” Nvidia vice president of health care Kimberly Powell told VentureBeat. “GSK is leading the industry in defining the next generation of data-driven drug discovery by harnessing genetic and clinical data to bring more precision to research and medicine.”